May 18, 2013
I've lived in Australia for thirteen years, but in the way that Sting was an English Man in New York, I have never quite felt "Australian", rather, I am a Welsh Man in Sydney. Anyway, I still feel very British, and am a fan of British TV (apart from a few highlights, Australian TV is generally bilge).

Anyway, I've always loved a good murder mystery, and I like Midsomer Murders, even though they have changed the lead character (and the new chief inspector was actually a criminal in a previous episode). The premise of Midsomer's is simple; a cop in the quite fictional county of Midsomer solves murders. However, the show has been running for 15 years, and there seems to have been an awful lot of murders (although the murder rate is considerably lower than Honduras!). To keep the stories going, murders are set in, quite often, bizzarre circumstances.

A recent episode, Written in the Stars, focused on the intrigue and mystery at a research observatory at Midsomer University (up until this point, I don't think there had been mention of a university in the county). With usual stereotypical fashion, we have a mean professor, who is ready to steam-roller anybody to build his reputation, and a young genius who is writing her thesis (on the Heisenberg uncertainty principle) and threatens to dethrone the evil professor.

As part of her research, she needs to look at an eclipse (go figure) and the murder mayhem ensues. That's not the bad physics (but doesn't help).

Here's the young genius at work, presenting her work in the dome of a telescope (not sure why she is not in an office or lecture room). 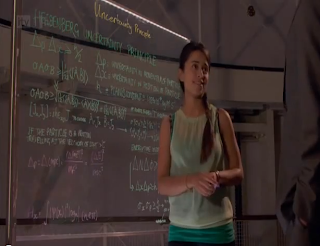 Someone has gone to great effort to fill the board with lots of scientific squiggles. It's not, however, gibberish. I'm not sure if they used a text book, or wikipedia, but there are some correct things there.

However,  something annoyed me. Zooming in on the board, what do we see?

Plank's constant! Argh!! You'd think that our young genius who has written a thesis on quantum mechanics and is presenting her research to evil and nasty professor could spell Planck's name correctly. But there is more! Whoever wrote the squiggles got the symbol, h, correct, and even the value, 1.054 x 10-27, correct, but they completely screwed up the units (that's too painful to go into) and what this number actually is is ħ ,which is Planck's constant divided by 2π.

Why would they bother going to the effort of writing something semi-correct, but pay so little attention that they make a mess of it? Why not just do it right? Don't they realise that professors of astrophysics might be watching? 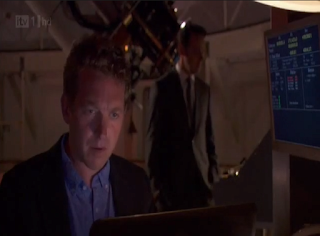 We don't. We have offices like everyone else. And even when we are at the telescope, we are in the control room, not freezing our bottoms off in the dome.

Before finishing, I think it's worth noting that the observatory actually used in the show is actually a university observatory. It is the University of London Observatory at Mill Hill

Even though I was a student at the University of London, I never used this observatory, although I did visit there when I was looking for a PhD position. However, the observatory is not in the picturesque county of Midsomer, but is next to the A1 in North West London. 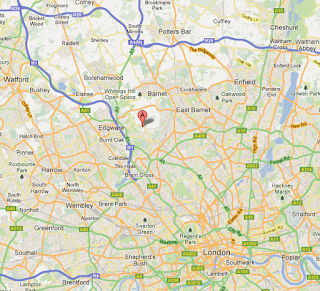 Like a lot of observatories around the world, it was build outside of a city, but the cities have grown around them.

Anyway, the murderer was not the evil astrophysicist..... It was actually the friendly professor of Quantum Physics! I'm sure his knowledge of the uncertainty principle will help him in prison.
Intermission
Location: Sydney NSW, Australia