May 28, 2013
I am not a reader of the Daily Mail, but a search engine threw up this tasty morsel; A real mathematician has come up with a formula for the perfect cream tea (and let's not get into the Cornish verses Devon argument!). Not only is there the fancy graphic, but there is a paper. There is some impressive (if you are in Year 7) mathematics for the thickness of the jam and the cream, and the news media just laps it up.

In his fantastic book (READ IT!), Bad Science, Ben Goldacre bemoans these studies that regularly appear in the media, studies like the most miserable day of the year, or most perfect bottom, for a number of reasons.

Firstly, these are generally not real mathematical studies, but are often commissioned by advertisers and media groups to promote something. In this case, it is clear that this is true with our cream teas, as the Daily Mail tells us

and a quick google shows us that


Rodda's mathematician finds the formula for a perfect cream tea

That's right - it's been used by a clotted cream company to promote cream teas!

The other problem is that this is simply not the way that mathematics is done. It trivializes an important human endeavor,  one of the things that got us out of the caves and into cars, aeroplanes and space-ships. You might get an understanding that I am a big fan of mathematics, and I wish I had time to learn more. You might think I am crazy, but once you realise that mathematics is a lot more than algebra (which are all these puff formulas [yes, formulas] are) then you can see how cool it is too. I'm having a hard time convincing my son, but he is still learning algebra.

As I noted at the start, Dr Cheng who wrote the original article is a real mathematician, and she has some cool work on her webpage, including higher dimensional spaces and algebraic topology. 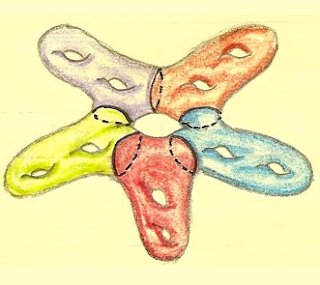 (Image taken from her webpage). It is also clear Dr Cheng is an advocate for bringing mathematics to a broader audience, which is, of course, an excellent thing to do. And I bet that in signing up to the cream teas story, she felt that this would be the result.

However, as invariably happens with these "perfect formula" stories, the comments quickly turn nasty.

And many, many more. There are a couple of things to note; firstly, many seem to think Eugenia Cheng is a man (perhaps they think that all mathematicians are men?) But also note the "waste of tax payers money" statement! People think this is real research, funded through a research grant! It isn't. It's a puff piece from a clotted cream company.

And when universities call for extra funding for research, the response can be "why should we? all they do is work out mathematical formula for the most perfect/depressing day/bottom/cream tea. Money should be spent on hospitals and roads...."

I know this won't be the last such puffy story we see, but it would be nice to see a little more real mathematics in the news, such as the fact that we have the first proof that there are an infinite number of prime pairs. What's that? Too complex, too esoteric, not as tasty as a cream tea?

But those in the know know that things like prime numbers provide us with the secure communication (such as RSA), and knowing the properties of primes will give us secure communications into the future. And it's not just primes, it's a whole range of mathematics that underpin modern life, and there is a wealth of untapped pure mathematics waiting in the wings to change the future (once we work out what it can be used for). Maybe it would be nice if the public understands that.

So, next time you use encryption (like when you are using a website with https), remember that it was designed by a mathematician thinking about pure numbers. They might have also been thinking about perfect/depressing days/bottoms and even cream teas, but let's not forget how important their real work is for modern life.

[Note added - the story is alive an has appeared on major news-sites in the UK and Australia, and Ben Goldacre has commented on his twitter]
Intermission
Location: Sydney NSW, Australia