A peculiar faint satellite in the remote outer halo of M31

May 19, 2013
The Pan-Andromeda Survey (PAndAS) continues to be a gold-mine for science. We're squeezing it hard to get out key results, but next year, the data will become public and everyone can have a looksie and write their own paper.

Here we have another paper by ANU astronomer, Dougal Mackey. Dougal's expertise is understanding the globular clusters orbiting the Andromeda galaxy, especially the distant clusters. He published a really nice piece of work recently which showed that these distant globulars are not just scattered randomly about Andromeda, but are more likely to be sitting on the stellar substructure we see. This substructure is the tidal debris from smaller galaxies that have fallen in and been shredded, meaning that the globulars are immigrants, having been born outside Andromeda, but joining the halo when their parent galaxy is destroyed; this is galactic cannibalism in action.

This new paper is about a particular cluster of stars orbiting Andromeda, named PAndAS-48 (who says astronomers aren't imaginative when it comes to naming things!). While this cluster was initially observed with the Canada-France-Hawaii Telescope (CFHT) as part of PAndAS, this paper presents new observations with the Hubble Space Telescope.

While the CFHT, at 3.6m, is larger than Hubble (2.5m), the lack of an atmosphere means we get much sharper images, and hence can see a lot fainter. Here's images from CFHT (left) compared to Hubble (right). 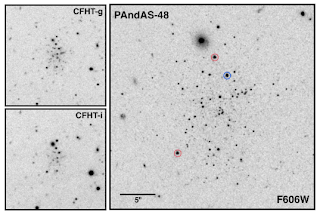 Nice! We actually observed the cluster in a couple of photometric bands with Hubble, which allowed us to make a colour-magnitude diagram; as you know, stars are not randomly scattered in such a picture, but sit on sequences that are driven by stellar evolution. What do we see?

For those in the know, yes, the faintest stars in there are around 28th magnitude!

In there, we can see the Red Giant Branch and Horizontal Branch, and that allows us to understand lots of things about the globular, such as how far away it is and what stage it is at in terms of its evolution. 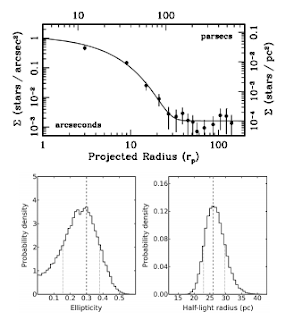 So, what is this cluster of stars? Is it a dwarf galaxy, dominated by dark matter? or a globular cluster, which are thought not to contain dark matter? It's actually very hard to tell. This piccy illustrates the issue. 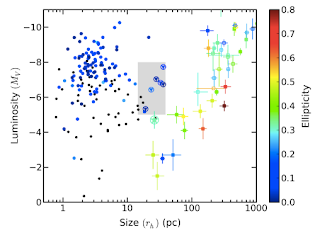 The picture is pretty self-explanatory; size is along the bottom in parsecs, and brightness is up the side. The dots are colour-coded in terms of how elliptical they are.  The squares on the right are dwarf galaxies; they tend to be big and elliptical. The dots on the left are globular clusters, which tend to be small and circular (but notice that they can be of the same brightness as the dwarfs).

Where's PAndAS-48? It's the point with a circle around it, stubbornly right between the two populations! In fact, the ultimate conclusion is that we don't know what it is. If it is one or the other, then there are problems. But that's cool too!

It is worth noting that PAndAS-48 appears to sit on the vast thin plane of satellites orbiting Andromeda, which makes it even more intriguing, but we haven't got it's velocity so can't confirm if it is orbiting in the same sense. But if it is, it will be extra cool.

As ever, the more we learn, the more questions we have. Yay!!

We present Hubble Space Telescope imaging of a newly-discovered faint stellar system, PAndAS-48, in the outskirts of the M31 halo. Our photometry reveals this object to be comprised of an ancient and very metal-poor stellar population with age > 10 Gyr and [Fe/H] < -2.3. Our inferred distance modulus of 24.57 +/- 0.11 confirms that PAndAS-48 is most likely a remote M31 satellite with a 3D galactocentric radius of 149 (+19 -8) kpc. We observe an apparent spread in color on the upper red giant branch that is larger than the photometric uncertainties should allow, and briefly explore the implications of this. Structurally, PAndAS-48 is diffuse, faint, and moderately flattened, with a half-light radius rh = 26 (+4 -3) pc, integrated luminosity Mv = -4.8 +/- 0.5, and ellipticity = 0.30 (+0.08 -0.15). On the size-luminosity plane it falls between the extended globular clusters seen in several nearby galaxies, and the recently-discovered faint dwarf satellites of the Milky Way; however, its characteristics do not allow us to unambiguously class it as either type of system. If PAndAS-48 is a globular cluster then it is the among the most elliptical, isolated, and metal-poor of any seen in the Local Group, extended or otherwise. Conversely, while its properties are generally consistent with those observed for the faint Milky Way dwarfs, it would be a factor ~2-3 smaller in spatial extent than any known counterpart of comparable luminosity.