January 09, 2013
The first week of 2013 has come to a close, and it has been quite a week, with an accepted cosmological paper, a Nature paper appearing (which will be blogged about before the weekend is through), and another achievement of which I am proud. It's all to do with this place.

Some of you may recognise this as the summit of Mount Kosciuszko, the tallest mountain in Australia, and hence the highest mountain on the continent. I climbed this with the family on Sunday under an extremely toasty Australian Sun and, as we didn't take the easy way back, but followed the far more up-and-downy Main Range loop, and so covered 22km, and were left with sore legs, and a golden brown colour.

I will admit that Kosciuszko is not the tallest of mountains, it's only 2,228 metres, and it is not the hardest to climb (the simply up and down path is doable by most people), but it is the highest mountain on a continent, and, while it is the lowest of the Seven Summits, it's the only one I am likely to achieve (the next highest, Vinson Massif, is in Antarctica, although Kilimanjaro is a possible!).

Before people start complaining, I do know that if we include the island of Papua as part of the Australian continent, there are taller mountains, but I would like to remind my British colleagues that Kosciuszko is almost 1km taller than Ben Nevis, and 2 1/4 times the height of England's highest mountain, Scarfell Pike.

But it was to be a week of extremes, as we tried to head home yesterday, the hottest day on record. We were on the South Coast, near Batemans Bay, and after a tasty lunch we hopped into the car to drive back to Sydney. This is what greeted us in the car 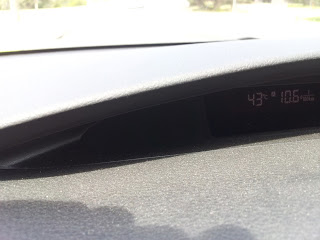 That's 43 degrees C. I've actually been hotter in Australia (44 degrees C), but 43 is hot. The South-East, where Sydney finds itself, has a lot of trees and grass-land  and, when the temperature gets this hot, then we bushfires bursting out. And when they start, you get to realise two things.

1) Bushfires burn fast and firefighters have a significant battle on their hands. Fire races towards towns and roads, people get evacuated and roads get closed.

2) Australia has a sparse road network.

We trundled up the main highway, found the road closed, back tracked hundreds of kms, tried to head over the mountains to Canberra and then onto Sydney only to find 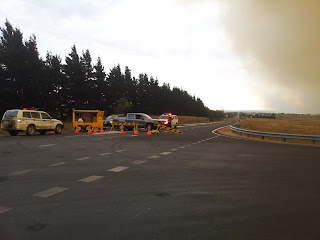 For those in the know, this is them closing the Kings Highway at the Goulburn turn. The smoke in the distance was moving quite quickly towards us. So, backtrack, and then 50 km of dirt road and highway into Queanbeyan eventually got us to Canberra and then to Sydney this morning (after a sleep in Canberra). Exhausting.

While Australia may not be extreme in its mountain-tops, it is extreme in oh-so-many other ways.