January 12, 2013
As promised, here's a post about our recent Nature paper. I think the title of the paper basically says it all, although this is a the result of a very large amount of work. It also turns out that I am writing some articles on this for public consumption, which I will also post here, so here's the summary version.

I written previously, here and here, about the sterling work by PhD student, Anthony Conn, on measuring the distances to the almost 30 dwarf galaxies in Andromeda, as part of the PAndAS program.

Well, we now have the distances. So, the question is, are the dwarfs just thrown about at random (which is what you would expect from our cosmological simulations of structure formation), or is there a pattern. Here's the sample, on the PAndAS footprint: 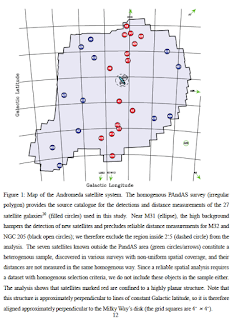 The red and blue circles are the locations of the galaxies orbiting Andromeda. Just looking at them on the sky doesn't seem to reveal any structure, but remember, with the distances, we have the full 3d distribution. But even in 3d, there doesn't appear to be any particular substructure.

This is given by the binomial coefficient, and the answer is "A lot!" (well, 17,383,860). And so we set out to test each subsample, comparing their distribution of random samples of 27 galaxies.

To cut a very computationally long story short, we found a significant plane of dwarfs! They are the ones in red in the figure above. The plane is narrow, only 14 kpc, but immense, being 400 kpc in diameters. Here's the 3d view: 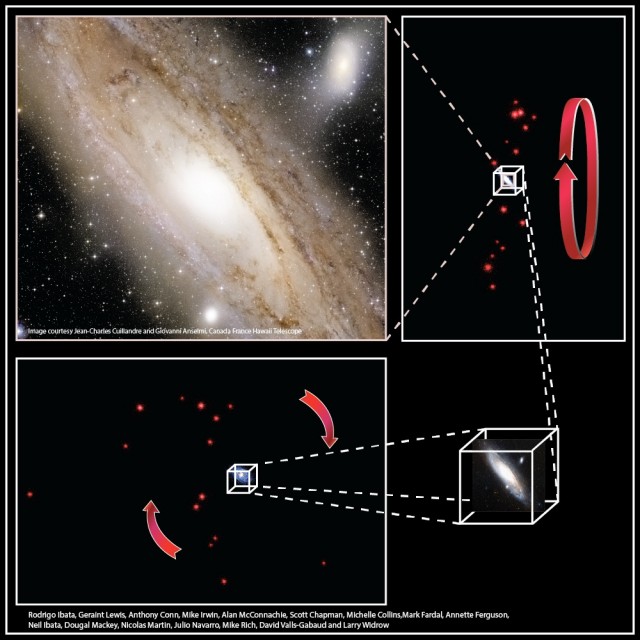 Quite clearly, the edge of the plane appears to be pointing straight at us!! But what are those arrows doing in the picture? I've also written previously about our measurements of the velocities of all of the dwarfs (there are actually several teams doing this) and so we know how fast things are moving. And what we find is there is velocity structure in 13 of the 15 galaxies in the plane; all those north of Andromeda are coming towards us, and all of those south are moving away. It look like the plane is rotating!

As that sinks in, watch this movie.
As an aside, the music is being played by Neil Ibata, a coauthor on the paper; not bad for a 15 year old (as you might guess, he's the son of the lead author of the paper).

So what does this mean? Well, as I've noted above, such a structure is not expected in our standard models of galaxy formation and evolution. There have also been claims of a similar structure, known as the Vast Polar Structure (VPoS) around our own Milky Way. Here's what it looks like And these authors have asked "Do the Milky Way's companions spell trouble for dark matter?", and you can read their take on our paper at Marcel S Pawlowski's blog (although some may claim these views are a little closer to the fringe than standard cosmology).

So, what's the answer? Is this a challenge to cosmology or not? I don't know, but it is going to be fun trying to find out :)


Dwarf satellite galaxies are thought to be the remnants of the population of primordial structures that coalesced to form giant galaxies like the Milky Way. An early analysis noted that dwarf galaxies may not be isotropically distributed around our Galaxy, as several are correlated with streams of HI emission, and possibly form co-planar groups. These suspicions are supported by recent analyses, and it has been claimed that the apparently planar distribution of satellites is not predicted within standard cosmology, and cannot simply represent a memory of past coherent accretion. However, other studies dispute this conclusion. Here we report the existence (99.998% significance) of a planar sub-group of satellites in the Andromeda galaxy, comprising approximately 50% of the population. The structure is vast: at least 400 kpc in diameter, but also extremely thin, with a perpendicular scatter <14.1 kpc (99% confidence). Radial velocity measurements reveal that the satellites in this structure have the same sense of rotation about their host. This finding shows conclusively that substantial numbers of dwarf satellite galaxies share the same dynamical orbital properties and direction of angular momentum, a new insight for our understanding of the origin of these most dark matter dominated of galaxies. Intriguingly, the plane we identify is approximately aligned with the pole of the Milky Way's disk and is co-planar with the Milky Way to Andromeda position vector. The existence of such extensive coherent kinematic structures within the halos of massive galaxies is a fact that must be explained within the framework of galaxy formation and cosmology.