Does the Sagittarius Stream constrain the Milky Way halo to be triaxial?

January 28, 2013
I am still well behind on posting papers that were accepted at the end of last year, so a brief post to help clear the backlog. Brevity is also forced upon me as it is grant writing time, and as well as writing a grant, I am mentoring others.

Today's paper was accepted in December, but it is based on work I've been involved with for more than 15 years. The lead author is my old colleague, Rodrigo Ibata, who you've met before, and the subject matter should be familiar, namely the Sagittarius Dwarf Galaxy.

Basically, Sagittarius is orbiting the Milky Way, and is being torn apart my the gravitational pull of the larger galaxy. It looks like this

It's ragged appearance is a sign of its ongoing demise. But that's not the cool part. The bit we're interested in is all of the material that has been torn off and now forms a complete stream around our Milky Way. That looks like this
The structure in the streams is rather complex and we don't really understand quite what is going on, but there are a few things that we do understand. Basically, the streams are orbiting the Milky Way, not just the stars you can see, but also the dark matter that you can't.

Can we use the details of the streams to tell us about the properties of the dark matter?

The answer is yes, and long, long ago, we wrote this paper which showed that if the dark matter is spherical, then the orbit of the Sagittarius Stream will stay in a single plane. If, however, the dark matter is flattened or triaxial (which is what you'd expect from what we know about dark matter), then the orbits will precess and the streams will be a bit of a mess over the sky. In that paper, we concluded that the Milky Way was spherical!

Since then, there have been arguments back and forth, and some have concluded that the dark matter halo is actually flattened (I can go into detail if you really want, but there's a lot more data and it's a complex story).

So, we recently revised this very question, and asked "Does the data that we have *really* need the dark matter halo to be flattened?"

How do we test this? It's simple. We know how the laws of physics work (and here, we need only the two great works of Newton, motion and gravity), so we throw lots of test dwarfs into test halos and try and find the one that most resembles reality (this, in reality, what science is all about).

But there is a problem. Namely, doing all of these test is computationally expensive. We need fast computers to try and model the demise of lots of dwarfs, and so a while ago we developed a new way to do this.

OK - Here's a summary of the results (sorry, time is of the essence) 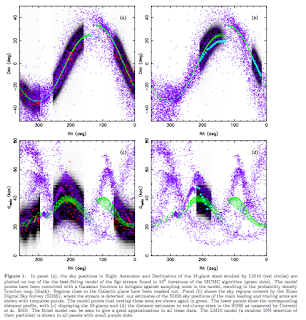 Lovely! The messiness of science. The purple dots are the "best model" that has been produced, and the green (and blackness) our model, and the red dots are the stars that have been measured. You might be looking at this and thinking "Just how do you compare the model with the data?". In all honesty, that is what science really is all about, and we spend a lot of time understanding just how to do this. Funnily enough, I think we do a bad job of telling student how to do this.

Anyway, to cut to the case, we show that we show that the conclusion that the halo of the Milky Way is not spherical is not as robust as people had claimed. In fact, we find that a nice spherical halo can happily reproduce what we see on the sky.

The sting in the tail? Well, there has to be one. And it's in the rotation curve of the Milky Way. The rotation curve is a very simple thing, being basically how fast a star in the Milky Way is circling the centre of the galaxy. Basically, the Sun zips around at 220 km per - wait for it - second.

What do we say for the rotation curve of the Milky Way? Here it is 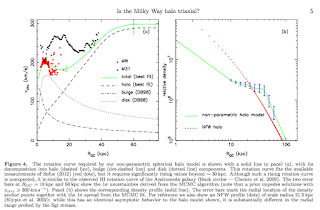 Hmm. If you've done some basic astronomy, you'll know that we expect that rotation curves of galaxies are flat. But we predict that, if we are right, then the rotation curve should keep increasing toward almost 300 km/s at large distance.

Ha ha - you shout, we know the rotation curve of the Milky Way! But, in reality, living inside the thing limits what we can actually understand about the place in which we find ourselves.

But don't worry. I am sure this is not the end of the story, and we'll be seeing Sagittarius and the shape of the dark matter halo very soon again.

Does the Sagittarius Stream constrain the Milky Way halo to be triaxial?

Recent analyses of the stellar stream of the Sagittarius dwarf galaxy have claimed that the kinematics and three-dimensional location of the M-giant stars in this structure constrain the dark matter halo of our Galaxy to possess a triaxial shape that is extremely flattened, being essentially an oblate ellipsoid oriented perpendicular to the Galactic disk. Using a new stream-fitting algorithm, based on a Markov Chain Monte Carlo procedure, we investigate whether this claim remains valid if we allow the density profile of the Milky Way halo greater freedom. We find stream solutions that fit the leading and trailing arms of this structure even in a spherical halo, although this would need a rising Galactic rotation curve at large Galactocentric radius. However, the required rotation curve is not ruled out by current constraints. It appears therefore that for the Milky Way, halo triaxiality, despite its strong theoretical motivation, is not required to explain the Sagittarius stream. This degeneracy between triaxiality and the halo density profile suggests that in future endeavors to model this structure, it will be advantageous to relax the strict analytic density profiles that have been used to date.