Phantom Energy and the Cosmic Horizon: Rh is still not a horizon!

January 04, 2013
Back to work, and a good start to the New Year. I will write more on this shortly, but our paper in Nature was published yesterday (the various astronomical societies I spoke to last year know about this result, but I've kept it quiet in professional circles - hopefully it will cause a few wave).

I know I keep saying it, but time is squeezed so a brief post today. And that's on another paper that I had accepted yesterday (I am still trying to catch up on the Christmas list... Ah well, I will get to those eventually).

I've written before about the work I have done on "The Cosmic Horizon". It's a long story, but there have been claims that this is a magical part of the Universe which has not been properly understood and modern cosmology has it all wrong etc. Simply put, these claims are wrong, but they keep appearing.

So, this new paper was in response to another paper which claimed our previous paper was wrong. As ever, the claims are wrong, as I describe.

There has been huge confusion over the years about what you can see in the Universe, and how can you observe things moving faster than the speed of light etc. If you find yourself in this state, I suggest you read this.

To cut to the chase, the claim is that the Hubble Sphere is a horizon, and that the light rays we receive are limited by the presence of the horizon (i.e. they can only go through it in one direction etc). In this paper, I showed that it is simple to make the Hubble Sphere increase and decrease by just mucking about with the constituents of the Universe, changing the spots of dark energy.

A picture speaks a thousand words: 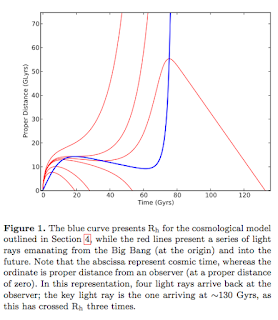 In fact, in mucking about with the make up of the Universe, I could make the blue line dance in and out, and play with a photon, making it cross the blue line as many times as I wanted before we observed it. Simply put, the blue line is well understood. It's the Hubble Sphere. It is not a magical Cosmic Horizon.

And just to make Prajwal smile, I did the calculations in Python.

Phantom Energy and the Cosmic Horizon: Rh is still not a horizon!


There has been a recent spate of papers on the Cosmic Horizon, an apparently fundamental, although unrecognised, property of the universe. The misunderstanding of this horizon, it is claimed, demonstrates that our determination of the cosmological makeup of the universe is incorrect, although several papers have pointed out key flaws in these arguments. Here, we identify additional flaws in the most recent claims of the properties of the Cosmic Horizon in the presence of phantom energy, simply demonstrating that it does not act as a horizon, and that its limiting of our view of the universe is a trivial statement.