December 31, 2012
Due to the Twilight Zone between Christmas and New Year, I am losing the catch-up game, but have just spent a rather wonderful couple of days up at Barrington Tops, camping in the wilderness and being "off the grid"; while I love camping, being off the grid is a rare situation for me. But that's not the story.

It's time to look at something I have written about before, and that is where did the globular clusters we see orbiting the Andromeda Galaxy come from? And as you might guess, this is another result drawn from the Pan-Andromeda Archaeological Survey (PAndAS).

This work is led by Dougal Mackey who is now at The Mount Stromlo Observatory in Canberra. Now, there are lots of globulars in Andromeda, most of them found close to the galaxy that is plain to see. What we have been doing in PAndAS is looking for the distant globulars, those far out in the faint stellar halo of the galaxy. Here's a picture from the paper 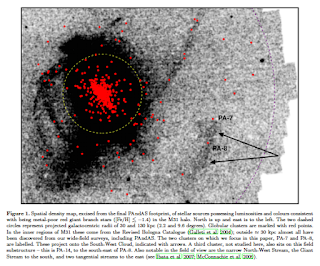 The underlying grey-scale is the density of stars we see in PAndAS, with Andromeda itself located in the middle of the mush on the left-hand side of the picture. You can also see lots of streams and shreds and bits and pieces, the detritus left over from cannibalised dwarf galaxies that have ventured too close.

The red dots are the globulars. As you can see, there are lots close to the actual Andromeda galaxy, but there are also lots scattered about at much larger distances. So, the question we have is are these globulars randomly scattered through the halo, or are they associated with the stellar substructure we see? If it is the latter, then that is exciting because it means that these globular were brought in with the dwarfs that were ripped apart, and they are in fact interlopers, immigrant globulars from other galaxies.

The focus of this paper was just two of the globulars, labelled PA-7 and PA-8 (see, astronomers are not boring at naming things). We used the Gemini telescope to firstly image the globulars, and here;s what they looked like.

Cute eh? The red lines indicate where the slit for the Gemini Multi-Object Spectrographs (GMOS) to collect the light and disperse it to get the spectra. Now, remember that these objects are faint, and even with the 8-metre Gemini mirrors, we still need to integrate (i.e. expose to collect light) for an hour and a half to get a decent spectrum.

Now, you could write a book on what you can learn from the photometry and spectra of stars (and there are many books that exist doing just this), but clearly the abundance of chemicals is a key thing. A lot of work over the years has gone into understanding stellar evolution, and what we know is that a population of stars (i.e. a mix of stars with a range of masses, but, in this case, all of the same age) will have a particular Colour-Mangitude Diagram based on the age of the population. There are subtleties based upon the chemical mix in the stars, but we know the chemical make-up from the spectra.

So, what do we find? Here's the key figure 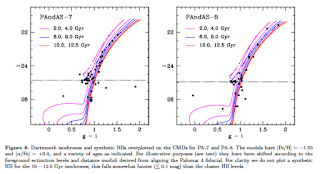 The pairs of lines are for pairs of ages for the stellar populations in the globulars, the pinky-purple being young (less than 4 billion years old) and the red being old (roughly 12 billion years old). As you can see, the actual density of stars in there is quite sparse, but from where they lie, it does look like this is a pair of young clusters, with ages less than 6 billion years (and probably closer to a few billion years).

As we saw in the opening picture, these two globulars are quite close on the sky, and they are both young, so are they related? Remember, one other thing we can measure from the spectra is the velocities of the globulars. If the velocities are hugely different, then these globulars are like ships passing in the night, and we just catch them at the right moment.

What we see is that PA-7 is moving at -433 km/s, and PA-8 is moving at -411 km/s (with uncertainties of less than 8 km/s); for reference, the Andromeda galaxy is moving at -300 km/s. So, these globulars have almost the same velocity! It looks like they are moving together through the halo of Andromeda.

But there's more! Remember at the start we saw that these two globulars are sitting on a smush of stars, the remnant of a disrupted dwarf. We haven't got the velocities of the stars in this blob (yet!) but will (eventually!), but the overlap is more than coincidence. The stars and the globulars are part of the same system, something that has fallen in and is being disrupted. PA-7 and PA-8 are newly arrived immigrants to the globular cluster system of Andromeda. How cool is that?


We report on Gemini/GMOS observations of two newly discovered globular clusters in the outskirts of M31. These objects, PAndAS-7 and PAndAS-8, lie at a galactocentric radius of ~87 kpc and are projected, with separation ~19 kpc, onto a field halo substructure known as the South-West Cloud. We measure radial velocities for the two clusters which confirm that they are almost certainly physically associated with this feature. Colour-magnitude diagrams reveal strikingly short, exclusively red horizontal branches in both PA-7 and PA-8; both also have photometric [Fe/H] = -1.35 +/- 0.15. At this metallicity, the morphology of the horizontal branch is maximally sensitive to age, and we use the distinctive configurations seen in PA-7 and PA-8 to demonstrate that both objects are very likely to be at least 2 Gyr younger than the oldest Milky Way globular clusters. Our observations provide strong evidence for young globular clusters being accreted into the remote outer regions of M31 in a manner entirely consistent with the established picture for the Milky Way, and add credence to the idea that similar processes play a central role in determining the composition of globular cluster systems in large spiral galaxies in general.