December 26, 2012
It's Christmas day here in Sydney, and the rain has fallen incessantly; it feels like when I was growing up in Wales.

Anyway, I thought a short post. Over at In The Dark, Peter Coles was talking about the new results from the WMAP satellite, the latest of the probes of the Cosmic Microwave Background; I've mentioned before that I am old enough to remember the results from COBE, especially this front page story. Basically, Peter's article points out that these observations have radically changed your understanding of the Universe. Mind you, looking at the above newspaper, and seeing "Bosnia ceasefire crumbles", tells me that in the same period, humans haven't advanced very far in the same period.

Anyway, in the comments, there was an interesting issue raised by Phillip Helbig (hi Phil!). Phillip and I are of the same vintage, and were raised on a diet of VMS before Unix became all pervasive in astronomy. Essentially, it is to do with the coincidence problem.

This is a simple problem to understand. Over cosmic history, as the universe has expanded, it was previously dominated by matter, but the density of matter has continued to thin out as the Universe got larger. However, the energy density of the other major component in the Universe, namely dark energy, remains constant even though the Universe expands.

So, in the past, the Universe was "matter-dominated", and in the future it will be "dark energy-dominated". Here's a piccy to illustrate this

The solid-line is the density of matter, and the dotted-line is the density of dark energy (normalized to the universal "Critical Density"). It's important to understand the time-scale on the x-axis, as it is logarithmic (rather than linear), so it includes everything from the tiny-time-scales of inflation, to the extensive time scale into the distant Universe. Look how rapidly (on this time axis) the change from matter dominated to dark energy dominated is.

The weird thing is that we currently find ourselves at a time where roughly a quarter of the energy density of the Universe is in matter and the other three-quarters is dark energy - so we find ourselves in the very narrow change over. We have a coincidence!!

So, where is my part in this story? Well, it's in a paper called "Through the Looking Glass: Why the "Cosmic Horizon" is not a horizon", but then MSc student, Pim van Oirschot, and then PhD student, Juliana Kwan (both of whom have moved on to better and brighter things).

The focus of the paper was not on cosmic coincidences, but we found one. We were looking at something called the deceleration parameter (normally called q).

How is q defined? It a combination of things that characterise the expansion of the Universe, its size, velocity and acceleration (for those in the know, these are the zeroth, first and second derivatives of the expansion factor with respect to cosmic time).

Now, we know that during the time that dark matter dominated, then the Universe was decelerating, but now the Universe is becoming dominated by dark energy, it is accelerating. So, the question is, what is the average of the deceleration and then acceleration over cosmic history?

This is one of the things we calculated in the paper. Basically, we took the cosmic parameters as we have currently measured them and calculated the time averaged value of q. Here's what we got 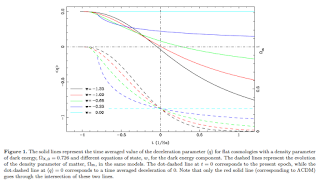 So, these have the same matter and dark energy densities noted above. Along the bottom is time, where zero is today, positive is into the future, and negative is into the past. The different coloured lines are for different equations of state of dark energy (the cosmological constant is the red line with w=-1).

Let's look first at the dashed lines, as these are the normalized densities of matter in each of these cosmologies (right-hand y-axis). In the past, in all of them, the Universe was more matter dominated, and into the future the matter density continues to diminish. But notice how on this linear scale, the "coincidence" of the matter density being not to dissimilar to one is no longer so spectacular.

As the Universe expands and dark energy comes to dominate, then the expansion starts to accelerate, and so q becomes smaller, and (for some of the models) becomes negative. For these, there is a switch in the time averaged value of q from positive to negative. For the black model, it was in the past. For the green model it appears to be in the future. But for the red model, the cosmological constant model, it appears to be - eerrrm - right now!

If we plug in the values of the cosmological parameters as we have now measured them, and included their uncertainties, how big do we expect the time averaged value of q to be? Well -

To within the uncertainty, it is zero. The switch over is right now!

What's the significance of this? I don't know. Some think that it's a fundamental property of the Universe, telling us something deep about the cosmos that we currently don't really understand. Others think that essentially its numerology, and if you play around with enough numbers, some combinations will surprisingly be close to zero, or pi, or one, or ten etc.

But, we now have the new numbers from WMAP, telling us the parameters of the Cosmos. These have changed slightly from the last numbers, and the errors have become tighter. The question is, has the time averaged value of q changed significantly with the new numbers, and has it become even closer to zero? If it has, it is interesting.

I will get to this, but being Christmas it may not be until the New Year. Something to think about during the Twilight Zone that this week is.

Have a Merry Christmas and Happy New Year :)