December 20, 2012
Still playing catch up with papers, research, and just about everything at the moment. Even though my university has closed down for the Christmas break, work has not stopped (or even really slowed down that much), but I will try and fire off a few quick posts to at least get the papers out of the way. I also don't have too much time this morning, as I have to head to The Opera House to see this 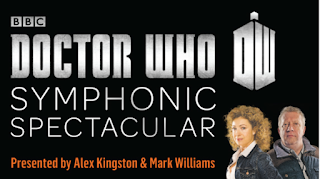 Just for the kids of course!

I've written about the Sydney AAO Multi-Object Integral FIeld Spectrograph (SAMI) previously. Here's a bit on it that I pinched from James Allen's webpage on it.

The concept is simple (but the implementation is not). In the old days, we would do single-slit spectroscopy, where we would collect light from a distant galaxy through a narrow slit, and pass that through a disperser to get a spectrum. This would give us the details of what was going on along that slit (so we could measure rotation curves).

But this is slow. You can only look at one galaxy at a time. So, there was a move to multi-fibre spectroscopy, where you plonk a fibre on the galaxy and collect the light from that. You get a spectrum of the galaxy, but there is no longer any spatial information. But you can still do lots of things. One of the most successful multi-fibre spectrographs is 2dF/AAOmega and the resulting 2dF Galaxy Redshift Survey.

SAMI overcomes the limitation of simple multi-fibres by using integral-field units to collect light from different parts of a galaxy. This is effectively a bundle of fibres which gives you a spectrum at a large number of points over a galaxy, allowing you to measure the velocities, chemistry, star formation etc at each of the points.

The second paper using SAMI data was recently accepted, with lead author Lisa Fogarty. It was targeting a specific galaxy, the spiffily named ESO 185-G031. Here's that it looks like 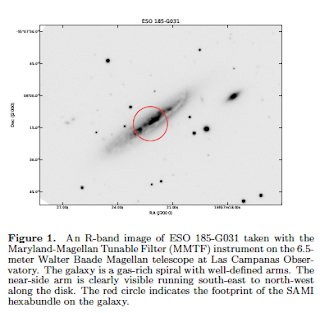 It's quite clearly a close-to edge on spiral galaxy. The red circle shows how big the SAMI fibre bundle is.  So, we can collect the spectra at the points within the red circle, and measure the emission we get for a range of elements in there. Here's maps of some of them. 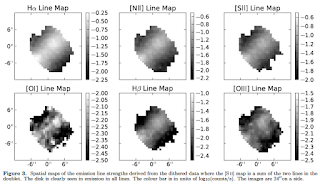 Look at how uneven some of that emission is! Remember, single fibres don't see all of the details of this, but just collect a single measurement of the strength of each of the elements.

What we do with these is a little complex, but generally you plot the strength on one element against another. Here as some of these (lovingly known as diagnostic plots). 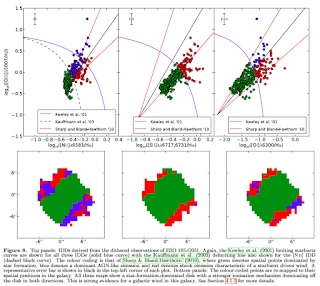 So, with a single fibre, this galaxy would be a single point on each of those diagnostic plots. One dot. And based upon where it sits on there, it would be classified as star forming, dominated by an active nucleus (an accreting black hole) or shock powered (thats the green, red and blue colour-coding in the picture). What we find is that the ratio of the elements in each of the fibres is different, and that different parts of the galaxy are dominated by differing physical processes, with the disk parts dominated by star formation, but with shocks and AGN-like activity. How cool is that!!

Basically, what we are seeing is a wind being driven off the disk, a wind driven by the star formation activity inside the disk. The Universe - you've got to love it!!!

I will say it again. Single fibres don't see any of this detail, they just see an integrated smoosh of light. Thousands of galaxies have been classified based upon where their integrated light plops them on the diagnostic plots, but they are probably much more complex, messy objects. With SAMI, we are seeing a real shift in how we will understand the working of galaxies. Cool!

We present the first scientific results from the Sydney-AAO Multi-Object IFS (SAMI) at the Anglo-Australian Telescope. This unique instrument deploys 13 fused fibre bundles (hexabundles) across a one-degree field of view allowing simultaneous spatially-resolved spectroscopy of 13 galaxies. During the first SAMI commissioning run, targeting a single galaxy field, one object (ESO 185-G031) was found to have extended minor axis emission with ionisation and kinematic properties consistent with a large-scale galactic wind. The importance of this result is two-fold: (i) fibre bundle spectrographs are able to identify low-surface brightness emission arising from extranuclear activity; (ii) such activity may be more common than presently assumed because conventional multi-object spectrographs use single-aperture fibres and spectra from these are nearly always dominated by nuclear emission. These early results demonstrate the extraordinary potential of multi-object hexabundle spectroscopy in future galaxy surveys.