December 01, 2012
I am still playing catch up on the papers I've recently had accepted, and after this one there are two more that I have to write up.

Today's paper is lead by Dougal Mackey at Mount Stromlo Observatory in Canberra (officially, its name is now The Research School of Astronomy and Astrophysics (RSAA), but it will always be Mount Stromlo to me).

The paper is yet another from the Pan-Andromeda Archaeological Survey (PAndAS), and so you know will be a cool result :). Dougal's expertise is globular clusters, balls of a few million stars that orbit large galaxies.

If we look at a nice globular in our own galaxy, it looks like this.

How beautiful is that?

However, the ones in the PAndAS images are 2 million light years away, and look something like this

Yes, those little balls of stars in the middle. Maybe a little less spectacular, but still extremely interesting. Why?

Well, the question we have is "Where do globular clusters come from?" Unlike other groups of stars we see out there, globulars don't appear to reside in a big halo of dark matter, and so it is a case of "What you see is what you get". As I've written about before, this makes them an ideal place to to test theories of gravity.

We do know that there are hundreds of globulars orbiting the Andromeda galaxy, more than twice as many as our own Milky Way galaxy. Why?

One of the things that PAndAS has really allowed us to do is take a panoramic view of where all the globulars are, especially in relation to all shreds of disrupted galaxies that we are seeing in the halo of Andromeda.  Here's what we see: 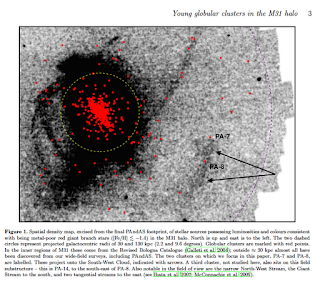 The red dots are the globular clusters surrounding the Andromeda galaxy (which lies at at the centre of the green circle). You can see that the where there are stars outside of the galaxy (the grey-scale underneath) there are generally more globular clusters. This suggests that the globulars were brought in with the little galaxies that were torn apart to make the substructure. Cool.

For two of these globulars, PA-7 and PA-8 (ain't astronomers boring when it comes to naming things) we got long-slit spectroscopy with the GMOS on the Gemini Telescope (the red lines on the figures above are the orientation of the slits), and, using the Doppler effect we are able to measure their velocities (if you want to know, -433 and -411 km/s respectively), showing that they are moving together (and reinforcing the possibility that they are associated with the underlying smudge of stars).

The really cool thing though is the ages of the globulars. Generally, they are old, many as old as the Universe itself. But these guys are a few billion years younger than the other globular we know orbiting Andromeda. Why? We don't know. But maybe they were born over late in the Universe due to the environment they found themselves in? Maybe they were born in the interaction with Andromeda itself? Either way, these are strange puppies, and I am sure there is more to come!


We report on Gemini/GMOS observations of two newly discovered globular clusters in the outskirts of M31. These objects, PAndAS-7 and PAndAS-8, lie at a galactocentric radius of ~87 kpc and are projected, with separation ~19 kpc, onto a field halo substructure known as the South-West Cloud. We measure radial velocities for the two clusters which confirm that they are almost certainly physically associated with this feature. Colour-magnitude diagrams reveal strikingly short, exclusively red horizontal branches in both PA-7 and PA-8; both also have photometric [Fe/H] = -1.35 +/- 0.15. At this metallicity, the morphology of the horizontal branch is maximally sensitive to age, and we use the distinctive configurations seen in PA-7 and PA-8 to demonstrate that both objects are very likely to be at least 2 Gyr younger than the oldest Milky Way globular clusters. Our observations provide strong evidence for young globular clusters being accreted into the remote outer regions of M31 in a manner entirely consistent with the established picture for the Milky Way, and add credence to the idea that similar processes play a central role in determining the composition of globular cluster systems in large spiral galaxies in general.