PAndAS in the mist: The stellar and gaseous mass within the halos of M31 and M33

As you know, the Pan-Andromeda Archaeological Survey (PAndAS) is a big program we've been doing on the Canada-France-Hawaii Telescope, mapping out the locations of all the stars in the halo of Andromeda (M31) and Triangulum (M33) galaxies.

It's taken a lot of work, but with all the data now in, it's time to squeeze out the science. There is actually a bit of a hurry about this, as in the next year, we are making all of the data public, and even you can write PAndAS papers.

What's this current paper about? Well, let's start with the first picture in the paper. 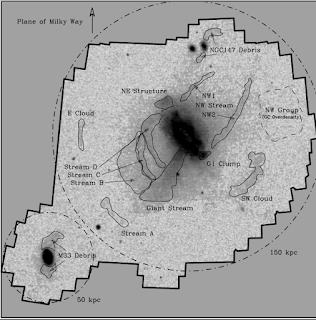 So, the dense bits are M31 in the topish-right, and M33 in the bottom-left. The grey-scale is the density of stars in the map, and the regions outlined are the various bits of substructure orbiting around. Basically, there is a lot of stuff there, lots of streams, chunks, bits and pieces. Clearly, there has been a lot going on.

The question we were asking was "Where's the gas?" What I mean by that is that if we assume that the infalling little galaxies, that end up as all the stellar shreds, contain gas as well as stars, then where does the gas end up?

Now, you might simply say "Isn't it in the same place as the stars?" It would be, but the forces acting on the gas are different. Gas when it hits gas results in Ram Pressure Stripping, and so the different forces can drive the gas into different locations.

So, what do we see? Here's the stars with the gas on top (you'll have to read the paper on how we got the gas densities, but a lot of work by radio astronomer extraordinaire Robert Braun). 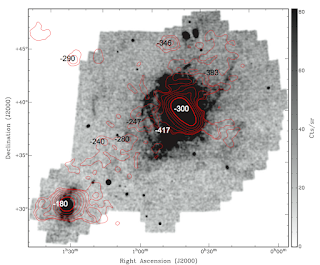 The numbers on there are the velocities of the gas. We do have some velocities of stars, but in very sparse points as (we've noted before) we need to use telescopes like Keck to get the spectra of individual stars.

While you can see there is lots of gas on the galaxies themselves (both M31 and M33 are spirals and have gas zipping about), but what about the streams and bits and blobs? Hmmm - nothing too obvious.

We can zoom in on the individual galaxies. Here's M31 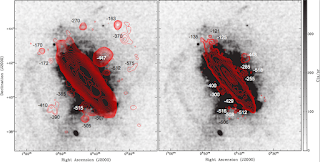 There are two images as the radio in each panel was obtained with different telescopes, and so has a different resolution. Again, gas in the main disk, bits and pieces around, but not a lot of gas where the stars are outside of the main disk. There is an intriguing bunch of clouds moving very fast (around -500 km/s) where the giant stellar stream is crashing into the disk. Well, roughly in the same place.

What about M33? That's even more interesting.

Clearly, M33 has a whip of stars coming off it, probably due to an interaction with M31. There's also gas whipped off as well, but notice it's not in the same place as the stars.

So, what do we conclude? Well, the stars and gas are in different place, and that there must be different forces at work on the stars as compared to the gas. There must be a halo of gas surrounding the big galaxies which is driving the gas in a different direction to the stars. Exactly how much gas there is, and how much is it interacting with the material pulled from infalling galaxies is still an open question, but we're working on it. It's going to take some cool simulations on big computers, but we're working on it.

PAndAS in the mist: The stellar and gaseous mass within the halos of M31 and M33

Large scale surveys of the prominent members of the Local Group have provided compelling evidence for the hierarchical formation of massive galaxies, revealing a wealth of substructure that is thought to be the debris from ancient and on-going accretion events. In this paper, we compare two extant surveys of the M31-M33 subgroup of galaxies; the Pan-Andromeda Archaeological Survey (PAndAS) of the stellar structure, and a combination of observations of the HI gaseous content, detected at 21cm. Our key finding is a marked lack of spatial correlation between these two components on all scales, with only a few potential overlaps between stars and gas.The paucity of spatial correlation significantly restricts the analysis of kinematic correlations, although there does appear to the HI kinematically associated with the Giant Stellar Stream where it passes the disk of M31. These results demonstrate that that different processes must significantly influence the dynamical evolution of the stellar and HI components of substructures, such as ram pressure driving gas away from a purely gravitational path. Detailed modelling of the offset between the stellar and gaseous substructure will provide a determination of the properties of the gaseous halo of M31 and M33.

PS - in closing, the Hume Highway, the main road from Sydney to Canberra (well, it by-passes Canberra and heads to Melbourne), is being renamed to Motorway 31 - or M31! Excellent.