December 18, 2011
When I say modern astronomy, what do you think of? Large telescopes peering into the sky, looking to unlock the secrets of the Universe? Of course, telescopes drive astronomical research, but what is often forgotten is the business end of the telescope, the instruments that collect the light, are the things that really define the science we can do. And such instruments can be extremely complex, and extremely expensive.

Here at Sydney we have a group working on astronomical instrumentation and a new instrument, The Sydney-AAO Multi-object Integral field spectrograph (SAMI), has recently be commissioned and the first paper has been accepted.

So, what does this new instrument do? Well, spectroscopy is an essential part of astronomy. Basically, it just means collecting light and dispersing it into a rainbow. Over to Pink Floyd 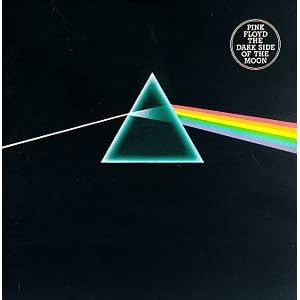 We don't use prisms any more (we use volume phase holographic gratings, which sounds much more science fiction). Looking at the light tells us lots and lots about the object we are looking at; the velocity, the chemistry, the star-formation history etc.

The problem has been that spectroscopy is that often you can only collect light from a single object at a time (long-slit spectroscopy). However, more recently we have been able to multi-object spectroscopy, using instruments like 2dF

Each little red dot here is little prism connected to a fibre, and so when pointed at the sky we can collect the light from lots of objects (and in this case, around 400 at a time).

The problem is that the prism is just a single `hole' and so if plopped onto a complex object with lots of structure, like a galaxy, will not see any of the complexity, it will just collect all the light in a smush.

But what if we want to get spatially resolved spectroscopy, to measure the chemistry and velocity from little bits of a galaxy? Enter SAMI! 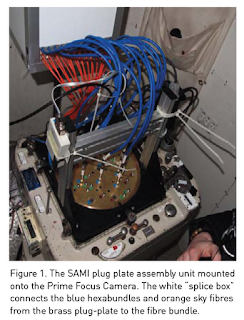 What is it? Well, put simply, instead of single fibres, each fibre is made of a bunch of tightly packed fibres, and each collects light over a small patch of sky. You get a picture like this

This field is 1.6 arcseconds across and has been plonked on a galaxy. What we are seeing is the velocity field of the galaxy, measured from the Doppler shift (the numbers on the side are km/s, so we can see a clear rotation curve for the galaxy.
I've been working with a student on measuring cosmology by looking at the correlations between galaxy spins and where the galaxies live. So with SAMI (which is on the Anglo-Australian Telescope), which can collect the light from 13 objects at a time, we have the prospect of surveying a large number of galaxies and actually undertaking the measures we propose. Exciting stuff!

But as I said at the start, the first SAMI paper is accepted for publication, with the SAMI team as authors and Scott Croom as head author. Well done Scott!

We demonstrate a novel technology that combines the power of the multi-object spectrograph with the spatial multiplex advantage of an integral field spectrograph (IFS). The Sydney-AAO Multi-object IFS (SAMI) is a prototype wide-field system at the Anglo-Australian Telescope (AAT) that allows 13 imaging fibre bundles ("hexabundles") to be deployed over a 1-degree diameter field of view. Each hexabundle comprises 61 lightly-fused multimode fibres with reduced cladding and yields a 75 percent filling factor. Each fibre core diameter subtends 1.6 arcseconds on the sky and each hexabundle has a field of view of 15 arcseconds diameter. The fibres are fed to the flexible AAOmega double-beam spectrograph, which can be used at a range of spectral resolutions (R=lambda/delta(lambda) ~ 1700-13000) over the optical spectrum (3700-9500A). We present the first spectroscopic results obtained with SAMI for a sample of galaxies at z~0.05. We discuss the prospects of implementing hexabundles at a much higher multiplex over wider fields of view in order to carry out spatially--resolved spectroscopic surveys of 10^4 to 10^5 galaxies.