The Beast with Four Tails

December 02, 2011
The Sagittarius Dwarf galaxy is a pretty cool object. It was discovered by a very close collaborator of mine, Rodrigo Ibata of the Strasbourg Observatory, way back in the ancient past (well, 1993), and it is clearly a little galaxy in trouble. It's orbit brings it dangerously close to the Milky Way, where its tidal gravitational pull is ripping it apart.

During its destruction, stars have been continuously pulled from the dwarf and are now wrapped around the Milky Way. These tidal streams are really interesting, and can be used to work out how the dwarf has been pulled apart. More importantly, if we can work out the orbit of the streams, then we can measure the amount of dark matter surrounding the Milky Way, a very important thing to do.

But look at this 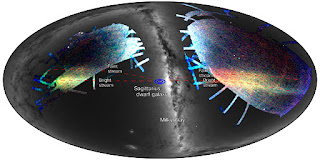 This is a map of the sky in coordinates where the tidal stream of Sagittarius wraps around the equator.  You can clearly see the Milky Way galaxy. The colour are fields from the Sloan Digital Sky Survey where stars in the halo of the Milky Way have been isolated.

A couple of years ago, when there was less Sloan data, the right-half of the image was called the field of streams. Here's the patch and it was clear that the stream of Sagittarius seemed to split into two. This is exceedingly weird, we really didn't expect it to do this, and none of the models we had predicted this. What the new data does is double the trouble as we now see that the forked stream continues into the South. 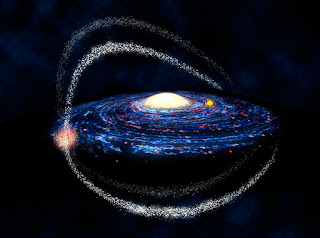 a real Beast with Four Tails. Honestly, this is very bizarre, and as of yet we have no real explanation on why it looks like this.  I remember when Sagittarius was discovered, and it was going to tell us what the dark matter halo of the Milky Way looked like, and it would all be wonderful, but what has happened is that every observation seems to make thinks more and more complex. But it keeps us in a job :)

A new paper on this, written by Sergey Koposov and Vasily Belokurov, and me, has been submitted for publication. Well done Sergey and Vasily!

The Sagittarius Streams in the Southern Galactic Hemisphere


The structure of the Sagittarius stream in the Southern Galactic hemisphere is analysed with the Sloan Digital Sky Survey Data Release 8. Parallel to the Sagittarius tidal track, but ~ 10deg away, there is another fainter and more metal-poor stream. We provide evidence that the two streams follow similar distance gradients but have distinct morphological properties and stellar populations. The brighter stream is broader, contains more metal-rich stars and has a richer colour-magnitude diagram with multiple turn-offs and a prominent red clump as compared to the fainter stream. Based on the structural properties and the stellar population mix, the stream configuration is similar to the Northern "bifurcation". In the region of the South Galactic Cap, there is overlapping tidal debris from the Cetus Stream, which crosses the Sagittarius stream. Using both photometric and spectroscopic data, we show that the blue straggler population belongs mainly to Sagittarius and the blue horizontal branch stars belong mainly to the Cetus stream in this confused location in the halo.