December 16, 2011
I started this post at Perth airport, but the wireless was too slow to complete it. So here goes (again).

I'm back in Sydney after a few days in Perth. I gave a talk at ICRAR and the The Australian International Gravitational Research Centre at the University of Western Australia. Perth clearly is a boom town, with plenty of money flowing from the mining (a bottle of house white cost $58!), and it still has a slight feel of the wild-wild western - the police were touring the lounge where I was sitting at the airport as, as you can imagine, several hundred miners were heading out on a Friday afternoon and, apparently, there has been trouble in the past.

I had several really interesting meetings in Perth, especially with regards to writing grants in the next ARC round (which has come round really quickly again). I'll write about those at a later date. On Thursday I was heading up to Gingin, north of Perth, for a BBQ at the Gravitational Wave Centre, and I was invited to take a look inside the research part of the centre. So, here's some piccies. 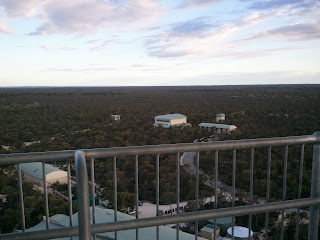 This is the view from the top of the 13 storey leaning tower (and it's quite an exciting climb!). The big building off in the distance is the research centre, and the smaller buildings are the ends of the arms of the interferometer (the length is about 80 m).

The tower leans do you can recreate Galileo's mythical dropping of canon balls from the leaning tower of Pisa. No canon balls here tho, only water filled balloons.

So, what does gravitational research, at the experimental end look like. Here's some examples. 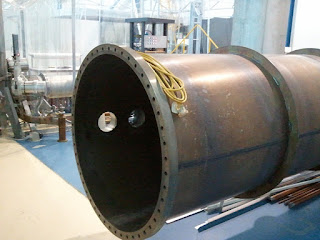 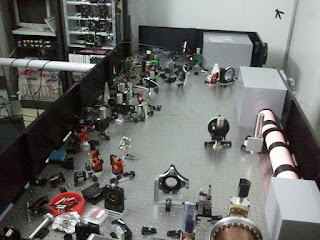 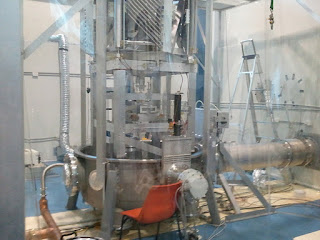 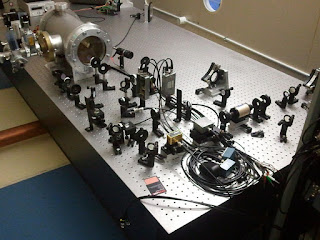 There's a lot of plastic sheeting, clean rooms, optical benches, vacuum chambers etc. The optical benches are amazing as they look chaotic, but each optical element has a purpose, and the laser light makes its way through all of them.

The thing about research labs (in physics at least) is that they often look  like a nightmarish mish-mash of cables and equipment, dewers, liquid nitrogen, helium tanks, random computers, etc, and there will often be people squirreling about in various corners apparently oblivious to what is going on in the rest of the lab. But amazingly, it is in this environment that great advances and discoveries are made. Neatness gets you nowhere (at least that is the excuse I use to explain my office).

They have a pretty cool visitors centre at Gingin, with lots of hands on things for kids to crazy with. But one thing caught my eye. 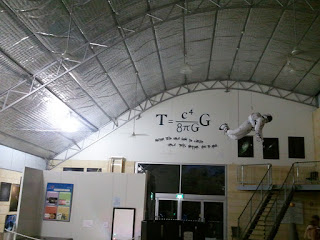