December 26, 2011
When I was an undergraduate student, I had thought about becoming a particle physicist, but a summer school first at the Rutherford Labs (working on proton-anti-proton scattering) and then CERN (search for charged Higgs particles) beat that out of me :)

There is a lot of chatter about the Higgs out there at the moment, but unfortunately I think that a lot of it illustrated the poor understanding of statistics by journalists (and even scientists). p-values make me weep.

Let's start with a picture - what's this?

Of course, it's an atom. Well, except we know this is just a schematic picture of an atom, a nucleus with some electrons whizzing around. A real atom is more complex than this, being described by the laws of quantum mechanics. Electrons are not little particles on defined orbits, but are quantum wave functions that (if you want to try and visualize them) look something like this -

One of the other things you remember from high school science is that each of these orbitals has a different energy level (some have the same, but let's not worry about this at the moment), and that when atoms absorb energy, the it changes energy levels, and this energy can lost through the emission of photons. For lithium, the energy levels look like this 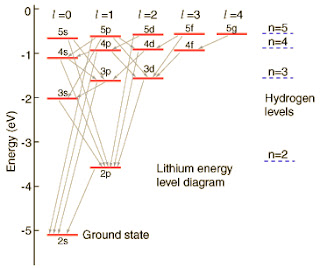 These discrete transitions give us discrete lines in the spectrum of the elements.

Of course, spectroscopy is vital in many fields - in astronomy it allows us to calculate the chemical composition of distant stars and galaxies.

Now, it might seem we are going a little off topic, but let's keep going. What about the nucleus of an atom? We know that the nucleus is made of protons and neutrons, and that protons carry positive charge, while neutrons are, well, neutral. This leads to a bit of a conundrum, as that positively charged protons will repel each other - how does the nucleus hold itself together?

This is where the strong force comes in. It provides an attraction which overcome the repulsion of the electromagnetic force between the protons. But the nucleus, like the atom, is governed by the rules of quantum mechanics, and so has quantized energy levels. So we get a picture like this 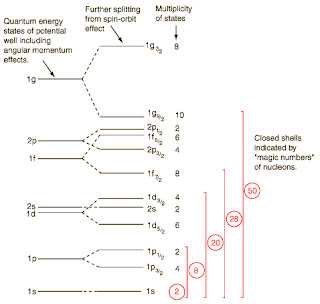 Because the forces are larger, the differences between the energy levels are larger than those you see in atoms, but the nucleus can undergo transitions in the same way that an atom can. Here's an example 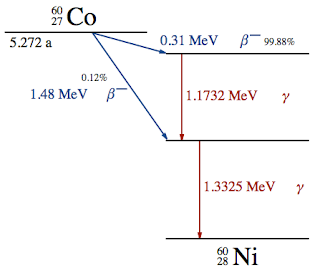 We start with Cobalt-60, which is radioactive, and emits an electron from it's nucleus. In doing this, it changes a neutron to a proton, and so becomes Nickel instead. On the right, we can see that it can emit an electron at either one of two energies, 0.31 MeV or 1.48 MeV, and this leaves the Nickel in one of two energy states. These states decay down into the ground state through the emission of γ-ray photons. So, γ radiation is nothing but nuclei undergoing transitions in the same way as atoms!

Now, one thing that some people don't know is that if we have a Nickel atom in its ground state, and one in a higher energy level, the one at the higher energy level is more massive than the one in its ground state. This, of course, makes sense. We know from special relativity that mass and energy are interchangeable, and so the excited nucleus has more energy and so more mass.

OK - finally, let's get back to the announcement of bottomium. Bottomium is a meson, meaning that it is make of a quark and an anti-quark, held together by the strong force. Looks something like this -

Now, there are only 6 different quark (up, down, top, bottom, charm and strange) and so there are only a finite number of combinations you can have to make mesons; the one above is a pion Bottomium is a quarkonium state, made of a bottom quark and an anti-bottom quark.

So, did the LHC discover bottomium in the previous week? Well, no. The ground-state bottomium particle was the ηb was discovered by the BaBar experiment in 2008. So what is the bally-hoo coming from the LHC.

Well, mesons (and they close companions, the baryons) obey the rules of quantum mechanics, and like atoms and nuclei, they have quantized states. They can be in their ground state, but if you give them energy, they can move into a higher energetic state. Just like nuclei, the more energy means more mass, and so the new particle, the χb(3P) is just the same old bottom-anti-bottom, but just in a higher energy state (in fact, the 3P gives it away, as those chemically minded would remember the P from SPDF). So, it's not really a new particle in the sense that it is made of something new, but is the same old particle but now with added energy. I guess that would not have been such an amazing press release :)

One last thing. As we've noted above, nuclei and mesons (and baryons) have more mass when they absorb energy and move to higher level. But the same must be true of atoms, and an excited hydrogen atom has more mass than an atom in its ground state. But the amount of energy held in an excited electron system is quite small compared to the overall atomic mass. Cool eh!

Note added in proof: Due to a convoluted history, the first excited bottomium state was discovered in 1977, with the ground state discovered in 2008. Here's the energy level diagram from the 2008 article above.

and while the press has been going on about bottomium, the correct name is bottomonium :)