December 01, 2011
One of the big questions of modern astrophysics is "what is dark matter?" Of course, we all know that there is a possibility that it is not a material substance at all, and the extra gravitational influence we need to explain observations may be due to a modification in the laws of physics, but it being matter is the simplest of hypotheses and it seems to work very well (but, of course, to the media and rabid slashdotters/internet trollers, we are nothing but religious fanatics pushing our wheelbarrow of dark matter, blinkered to the geniuses out there!).

If it is a material substance, then we have ruled out a number of candidates (in terms of stellar mass black holes etc), and the weight of evidence is pointing towards a subatomic particle. As the Universe evolves, dark matter clumps together to make dark matter halos within which galaxies like our own Milky Way form.

How small do dark matter halos get? Well, some think it continues down to planetary mass scale. If it does, out galaxies dark matter halo is made of a myriad of small mass halos whizzing about. How do we test if they are actually out there?

One method is to search for their gravitational lensing effect. The problem is that studying the effect is very difficult, as the number of little masses along the line of sight to a distant source is huge, and computing their influence is very hard.

Luckily, one of my PhD students (who recently submitted his thesis), Hugh Garsden, is a computing expert and he developed a brand new supercomputer code to address such a problem, and, with postdoc, Nick Bate, we just had a paper accepted for publication in the Monthly Notices of the Royal Astronomical Society.

The paper look at nanolensing, the effect of small masses in galactic halos on our view of distant quasars. To do that, we need to calculate a magnification map, tracing the paths of billions of rays through hundreds of millions to billions of lensing masses. Here's an example of the maps we produce 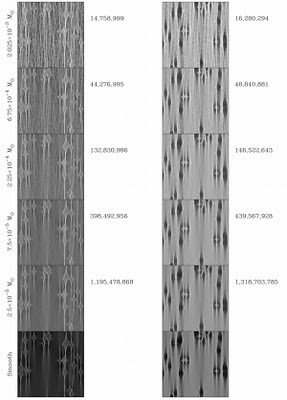 The little wibbles and wobbles in the map are due to the effect of the small masses. We can use these to work out how the brightness of a source will fluctuate as these masses move in front of it. You end up with the follow 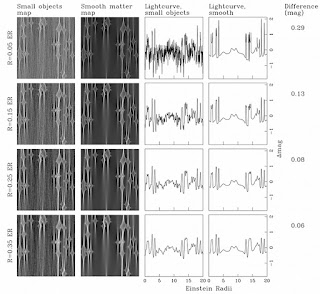 As you can see, the presence of the small masses cause quite rapid, small time-scale fluctuations which, if you try hard enough you can actually observe. Of course, if we don't see them, then we can rule out this kind of dark matter clumping, and science can move on.


Gravitational microlensing of planetary-mass objects (or "nanolensing", as it has been termed) can be used to probe the distribution of mass in a galaxy that is acting as a gravitational lens. Microlensing and nanolensing light curve fluctuations are indicative of the mass of the compact objects within the lens, but the size of the source is important, as large sources will smooth out a light curve. Numerical studies have been made in the past that investigate a range of sources sizes and masses in the lens. We extend that work in two ways - by generating high quality maps with over a billion small objects down to a mass of 2.5\times10-5M\odot, and by investigating the temporal properties and observability of the nanolensing events. The system studied is a mock quasar system similar to MG 0414+0534. We find that if variability of 0.1 mag in amplitude can be observed, a source size of ~ 0.1 Einstein Radius (ER) would be needed to see the effect of 2.5\times10-5M\odot masses, and larger, in the microlensing light curve. Our investigation into the temporal properties of nanolensing events finds that there are two scales of nanolensing that can be observed - one due to the crossing of nanolensing caustic bands, the other due to the crossing of nanolensing caustics themselves. The latter are very small, having crossing times of a few days, and requiring sources of size ~ 0.0001 ER to resolve. For sources of the size of an accretion disk, the nanolensing caustics are slightly smoothed-out, but can be observed on time scales of a few days. The crossing of caustic bands can be observed on times scales of about 3 months.