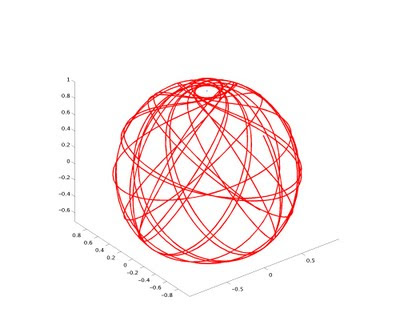 If you said "That's a small mass orbiting a large mass in a 2-d spherical universe", then you're correct.

I am going to be teaching general relativity in a couple of weeks time, and every time I do I start thinking about geodesics, not just through 4-d space-time, but also standard 3-d geometry. One of the problems (IMHO) with current physics degrees is that we don't really touch on curvilinear coordinates and tensors until their final year, and (especially when it comes to general relativity), this all comes as a bit of a shock.

However, we can cast much of (all of?) physics in generalized coordinates, and we should be doing this from the start, showing how things like classical mechanics can be done in Euclidean or polar coordinates (or whatever), and the key thing being that the physical predictions come out to be the same.

I also think this will help students understand things like conserved quantities a bit more, and realize that there is nothing particularly magical about momentum, and that momentum and angular momentum are just conserved "things" in different coordinate systems.

Anyway, back to the above figure. I was thinking about geodesics on a 2-d spherical surface. It is quite simple to show that these are great circles. But how to you show some other things, like if you are a point A and want to travel to a point B, which direction should you set off in to travel along the great circle path (this, of course, is what aeroplanes have to do every day).

But this got me thinking about non-geodesic paths, paths which are pushed and pulled by forces. So, I plonked a mass at the pole (the blue dot) and added a 1/r^2 force (where r is now the great circle distance) and integrated the path. The key part is the force is a vector, and so you have to know which direction it points in the sphere. For the mass on the pole, it's relatively straight-forward. For a more generalized location, it's a bit harder, but doable with vectors and coordinate transformations (and without having to rotate coordinates back and forth). The goal is to have several particles interacting with each other on the sphere.

Why do it? Well, I don't think this 2-d universe has any practical uses; I'm not advocating that this is in anyway a real system. But you do get to use some very key concepts as outlined above, and it is an interesting problem. For me, learning complex techniques is very much helped by trying out toy models first.

I'll discuss how I worked out the orbits (they're numerically integrated, but I'll demonstrate how to set up the equations). Just to prove I can put the mass at any location, here's another figure. 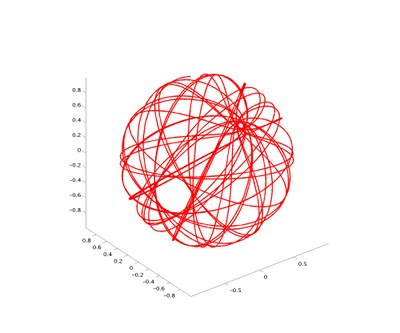