July 22, 2011
A great week for the Conns! My ex-students, Blair Conn (who is no relation to Anthony), Richard Lane and I have just had a new paper accepted on the discovery of a Collisional Ring Galaxy at redshift z=0.111 (the most distant one known - correction, one of the most distant known).

The galaxy was found serendipitously in a Subaru survey of the galactic disk and looks quite interesting. Here's two images of the system, in g-band (left) and r-band (right).

Cool eh! But it looks a bit better when you combine these to make a colour picture (we can make a pretend in-between band by averaging the two pictures above). This is what you get (and is annotated as in the paper). 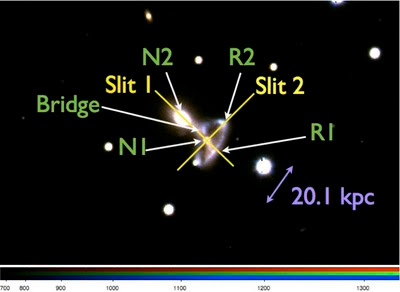 The Slits in the image correspond to where we pointed the GMOS spectrograph on the Gemini-North telescope, allowing us to measure the velocities of the various components. It also revealed that there are active galaxies hidden down in the middle.

So, what's going on here? Well, we have some local examples of these Collisional Ring Galaxies. Here's a pretty one as seen by the Hubble Space Telescope

As the name suggests, these are formed when two galaxies collide, where the collision is almost a bulls-eye, rather than a glancing blow. The collision causes gas to collapse and result in a burst of star formation in the ring. In Auriga's Wheel, gas also flows into the centre, pouring fuel onto the central black holes and resulting in the active galaxies we see. This suggest that the ring is very young, only 50 million years (a cosmic baby).

We've also done a preliminary set of computational modeling of the collision which confirms this: 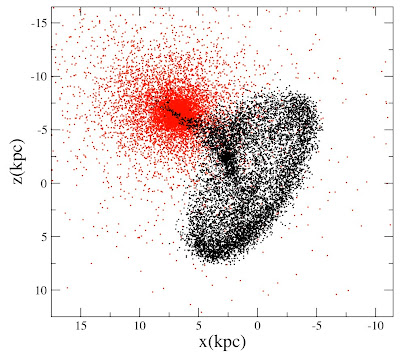 Here we have two galaxies of about the same mass, one with red particles, and the other with black. Looks like what we see (isn't physics wonderful!). Rory Smith is working on some more detailed modeling, and I'll pop that here when it's done. Well done Blair and Richard!!


We report the serendipitous discovery of a collision ring galaxy, identified as 2MASX J06470249+4554022, which we have dubbed 'Auriga's Wheel', found in a SUPRIME-CAM frame as part of a larger Milky Way survey. This peculiar class of galaxies is the result of a near head-on collision between typically, a late type and an early type galaxy. Subsequent GMOS-N long-slit spectroscopy has confirmed both the relative proximity of the components of this interacting pair and shown it to be the most distant spectroscopically confirmed collisional ring galaxy with a redshift of 0.111. Analysis of the spectroscopy reveals that the late type galaxy is a LINER class Active Galactic Nuclei while the early type galaxy is also potentially an AGN candidate, this is very uncommon amongst known collision ring galaxies. Preliminary modeling of the ring finds an expansion velocity of ~200 kms^-1 consistent with our observations, making the collision about 50 Myr old. The ring currently has a radius of about 10 kpc and a bridge of stars and gas is also visible connecting the two galaxies.