July 13, 2011
I've been observing at the AAT a couple of time over the last few months. It's a long drive from Sydney (almost 6 hours), for long winter nights in the dome. We were using the rather wonderful AAOmega spectrograph to chase stars in the Sagittarius Dwarf and its associated tidal stream (I'll write more about these later).

I'm not much of an Astronomer, in the sense that I am pretty clueless about constellations and the names of stars (but having Google Sky on my phone is really starting to help). But when I am observing, I take the chance to really look up. My first observing run (in 1991) was at the William Herschel Telescope in the Canary Island, and it was the first time that I **really** saw stars, and saw that they had colours. I have a valid excuse, having grown up in the not-so-clear skies of South Wales, followed by a few years in London.

However, there are more than things to look at other than stars. I really like catching Iridium Flares, a family of communication satellites which catch the Sun just before sunrise/sunset, and can become amongst the brightest things in the sky. Sometimes, we are luck to get a pair of flares within 30 seconds of each other, and on the last run, the legendary AAT TO Steve Lee photographed such a pair of flares. Here's the image; 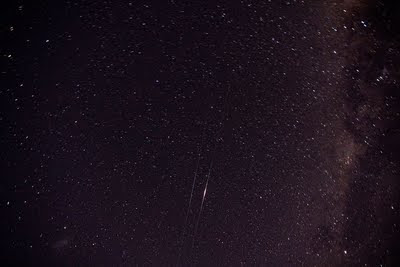 For the keen-eyed, you should also see the disk of the Milky Way and a Magellanic Cloud.

One of the weirdest things about observing is that when the Sun is on it's way up, but still well below the horizon, we can no longer observe due to the sky brightness, even though it (to your eyes) looks dark outside.

After all the calibrations are done, and your body is yearning for bed (and it is important to get to sleep before the Sun really comes up), what else can you do? Well, if Saturn is up (as noted by Anthony Conn who was observing with us), perhaps we can look at it with the AAT? Remember, however, we have a spectrograph on, and what we really want is an image. In fact, we used something called the Focal Plane Imager (which allows us to do things like monitor the seeing when observing with the AAOmega), and if you cut the integration time down to a bare minimum (remember, we do have a 3.9m telescope here), what you get is 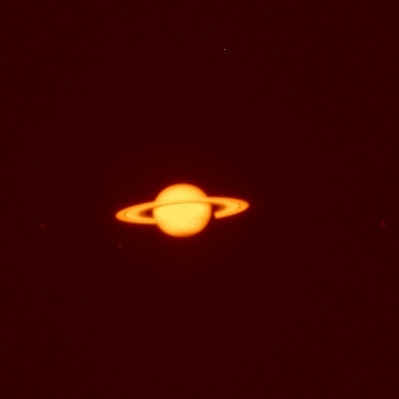 Again, we have Steve to thank for this excellent image (with 4 moons thrown in also, although I have a sneaking suspicion that the one at the top is a cosmic ray).

I guess, as an astronomer, I should look up a little more. It's all rather pretty up there.
Observing