July 24, 2011
No zombies or 2-d universes this weekend, as I have been busy with a few other things. This included heading to ANZ Stadium to see Australia play South Africa at rugby.

It is very easy for me to get to the stadium here in Sydney, much easier than it was to get to Arms Park when I was younger, and me and the family trundled down for the 8pm kick off. Trundling through the happy rugby cloud, we almost ended up at Acer Arena where Enrique Iglesias (whose crowd was as equally rowdy, and friendly, as the rugby crowd) was performing. It was interesting to see that also-Neath-born Katherine Jenkins will be performing there with Placido Domingo in September.

After finding the stadium, we watched a good game of rugby, especially given the Wallabies woeful appearance against Samoa last week. So good, in fact, that I only caught a couple of piccies. 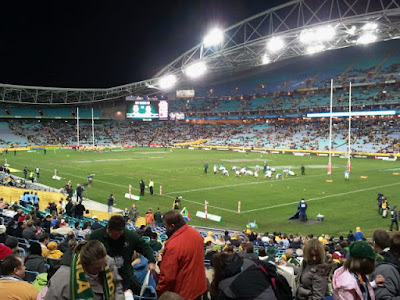 As I said, a good game, although the crowd doesn't sing Delilah. One cool point was the mexican wave. Due to the torrential downpour over the week, we all got little foam squares to sit on, which became a spectacular part of the wave as it went round.
Intermission