There's more to being an astronomer than doing astronomy

June 03, 2012
Back in Sydney after a couple of nights in the lovely Port Stephens, in the town of Shoal Bay at the ASA Early Career Research Workshop. Here's the grey sky as seen from my hotel room (it may be grey, but it's a lovely place). 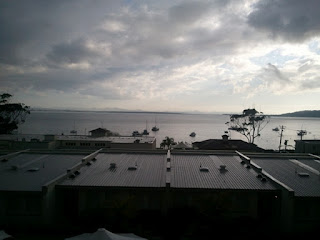 I should point out, with 17 years under my belt since my PhD, and being a professor at a large university, I am not an Early Career Researcher, and so I was there as a grown-up, providing advice and live stories.

I spoke on the topic of networking, something that sounds horribly business-world-like, but is an important aspect of establishing a career. There were a lot of postdocs there, many recently out of their PhD, but a few in their third postdoc, all with the question of "How do we get that career in astronomy?"

The discussions were frank and honest - the room was told that it is a 100% certainty that they all will not have a job in astronomy in the future - and I think the postdocs appreciated this honesty. I'll come back to this at the end.

The whole thing was broadcast on some new-fangled thing called twitter, which was apparently "trending" (I think I know what that means), but it was clear that the broader community is interested in early career advice.

So, here's one of the panel discussions 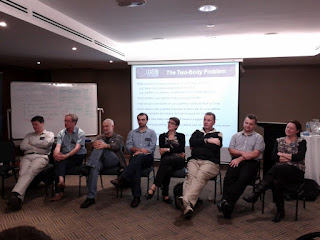 (pinched from Bryan Gaensler's twitter thing). Those that know Australian astronomy will recognise the people here, all senior "grown-ups" in the community.

There was too much material presented to summarize here, but interested people should check out the twitter feed (and there will be notes coming up sometime in the future). But there are a couple of things I would like to mention.

Firstly, the fact that senior astronomers can find time to attend such workshops shows that they care about the issues facing early career researchers. A lot of my career was effectively flying blind, not really knowing a lot of the key things I now know. We knew that the chance of obtaining a faculty position was slim, but I didn't really know what I needed to do to get one. The fact that I am where I am feels like a lot of being in the right place at the right time, and plenty of luck.

The second thing, which is sometimes forgotten when you read a paper or see a press release, is that the authors are people, and people with lives, partners, children, pets, parents and a mortgage, as well as observatory or university duties to perform. Well, they might not have all of these, but they will have non-astronomical things to deal with. We should not forget this, and we grown ups should be prepared to provide mentoring and advice to help with career choices. We should remember that there is more to being an astronomer than doing astronomy.

I'll finish on a more personal note. In the image above you can see that we were discussing the two-body problem. For those not in the know, what it boils down to is how do a couple survive the constant moving which is part of the astronomy career, jumping from country to country, especially when both have careers of their own, and when children appear on the scene.

While I am not a great fan of public speaking, and can often fake confidence, I felt myself welling up a little when talking about my own experiences. Now I am in the lucky position that we have the two-body problem solved (my wife is a successful career academic also), but in thinking through my own personal circumstances, I remembered how bloody stressful it was getting to where we are today, and this came through when I attempted to talk about it.

So, to the Early Career Researchers out there, it isn't easy, for anyone. But persevere, astronomy is a pretty good life, and a privilege to have.
Intermission
Location: Shoal Bay NSW 2315, Australia