The Physics of "Rendezvous with Rama"

June 09, 2012
While I read science fiction, I don't read a lot of it. I prefer history books (and while the 6th June was focused on the transit of Venus, it is famous for another big historical event). I'm not a fan of "magic" science fiction, where the equivalent of a magic wand is waved, with some pseudo-scientific gobbledygook, to fix a problem.

So, I am going to talk about a book that doesn't, namely Rendezvous with Rama by Arthur C. Clarke. I'll start with two confessions. Firstly, I don't really like a lot of Clarke's work. And second, I didn't actually read the book; I had it read to me.

To explain the latter statement, way-back-when I worked for the Anglo-Australian Observatory. Like virtually all support astronomers (those who show astronomers observing with the telescope the ropes) I lived in Sydney, but one week in five I had to travel to the telescope, a 5-6 hour drive. So I used audio books to maintain my sanity. And one of them was Rendezvous with Rama. And it stuck because it made me question the physics of what was going on.

I'll cut to the chase. Clarke was correct on his treatment of physics. But let's consider the thing that really got me thinking. Namely, jumping off a cliff.

OK. Let's start at the beginning. The book is about the exploration to a vast space craft that has entered the solar system. The ship is a cylinder, and as the action picks up, it is clear that the interior of the cylinder is intended as a place to live, with the rotation of the cylinder providing an "artificial gravity". At one point in the story, an explorer finds themself at the top of a cliff, and decides to step off. What happens?

Remember, there is no "real" gravity here, you are just in a rotating space ship. So, perhaps you step off and just float there? Now that would be weird.

To answer the question of what happens, we need to look at the situation from an outside observer.

Let's start by assuming that the cylinder is rotating with an angular speed (radians per second) of ω and that the cliff top is a radius, r1, from the axis of rotation, and the base of the cliff is r2. Remembering our classical mechanics, our instantaneous velocity when we are on the top of the cliff is v = ω r1 and it points in the tangential direction. Something like the picture below. 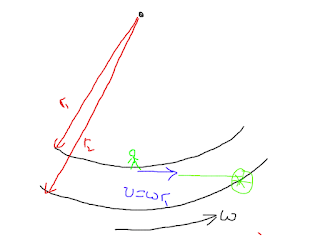 So, when they step off the cliff, they "fall", i.e. the explorer moves from the top of the cliff to the bottom. But let's ask the question what someone rotating with the cylinder, say standing directly at the bottom of the cliff, sees when the person steps off the cliff.

I won't put the geometry here, but it's all simple. The falling person covers the green line distance and uniform speed, so we can calculate the time it takes, and in that time the outer wall rotates a certain distance. I'm going to be lazy and explain everything with pictures, care of matlab. 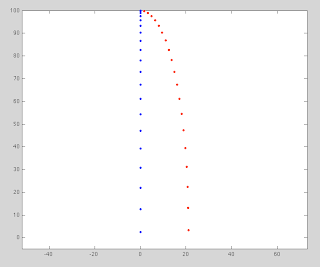 So, this is relative to someone standing at the bottom of the cliff. In this case, I made the ship have a radius of 2km, and the cliff be 100m high, and the acceleration experienced at the base of the cliff is 1g (at the top it is 5% smaller, so essentially unnoticable).

The blue dots are what you would expect on Earth, the person accelerates as they fall, but gravity acts in a straight line and so the spot they hit the base of the cliff is directly below where they jump off.

The red is what you get on the rotating space ship. The observer at the base of the cliff sees the person accelerate downwards, just as they would on Earth. But unlike the Earth, the faller also moves off to the side! And lands 20m away from where they jumped off. How cool is that?

Remember though, as seen by the external observer, the faller has no force acting on them during the fall. So the faller does not feel any push or pull once they step off, they are just in free-fall. But to the observer at the base of the cliff, who is rotating with the ship, they see the faller accelerate not only downwards, but side-ways as well. It looks like gravity, but not as we know it.

And if that doesn't get you thinking about the very nature of gravity, it should!
Intermission Numerical Methods
Location: Sydney NSW, Australia