June 21, 2012
I'm in Brooklyn, on my way back to Sydney after a meeting in Princeton. I'll mention the meeting a little more below, but when in Princeton, all those with an interest in physics should make a little pilgrimage to a small while house just off to the side of campus. It's address is 112 Mercer St. 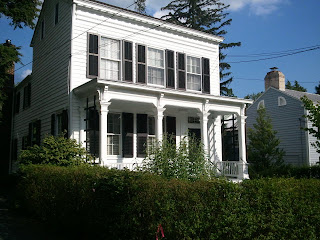 The house is interesting as it is where Einstein lived from 1936 until his death in 1955. Einstein's office was not on the main university campus (which is a rather beautiful and surreal place) but at the Institute for Advanced Studies which is just a little further down Mercer St.

Einstein's house is a pretty little wood house on a street of pretty wood houses, and doesn't stand out too much. Interestingly, Einstein did not want the house turned into a museum, and so it is still a private residence, with the current householder being Eric Maskin who, while not being a physicist, holds a Nobel Prize (in Economics).

Just to reinforce that this is not museum, and not to have hordes of physics fans swarming over the garden, there are a few signs on the gates which stress that it is a private residence. This doesn't stop us physics types cruising up and down the street and taking photos :)

Princeton has a lot of alumi, many of them very famous, but the town clearly is proud of its association with one of the greatest physicists who has ever lived. I snapped the below picture in Princeton town. 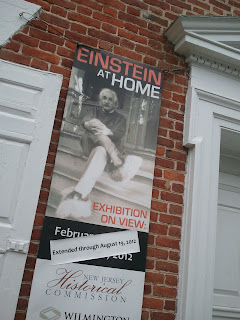 Funnily, many thought the red brick building was Einstein's house, even thought the picture has him sitting on a wooden white porch. But you have got to love those slippers!

The conference was not about Einstein, but there was a relation in a quite round-about way. The meeting was to mark the 100 anniversary of the birth of this man,
His name is Martin Schwarzschild, and he died in 1997. Outside of astronomy, his father, Karl, is probably more famous, providing the first analytic solutions to the Eisntein field equations for a spherical mass (and hence predicting black holes).

Inside astronomy, however, Martin had a huge impact on a number of fields, and his ideas and methods are very much in use today. Much of the meeting was about his work on dynamics and our nearest cosmic companion, the Andromeda Galaxy, but, as it is time for breakfast, I'll write about that when I get back to Sydney.