"Statistical thinking will one day be as necessary...

A very quick post today, as things are busy (more about that in a little while), but seeing the above quote at Steinn Sigurðsson "Dynamics of Cats" blog reminded me about something about physics education (and science in general).

I've mentioned before about my thoughts on physics education. Traditionally, this is split into two separate bits, the analytic mathematically bits in lectures, and laboratory work. People who do more of one than the other label themselves are theoreticians or experimenters. They are portrayed as living in different worlds.

The problem is that this completely misrepresents science. Science is the interface between these two, it is an extremely vital component, and we do an extremely poor job of highlighting how important this is.

Just what do mean? Well, let's take a simple example. Suppose someone calculated the scattering of Sun light as it comes through the atmosphere and proclaims "According to my calculations, the sky is blue", and an experimenter looks outside and says "Yes, it is blue", has science been done? Has the scattering theory been proved to be a good description of what does on in the sky? IMHO, the answer is a resounding no.

You might be scratching your head at this point. But ask yourself the question, what does it mean to say something is "blue"? Well, here's some blue. 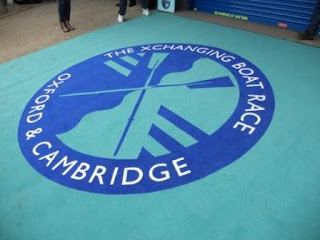 In fact, there are two blues here, and Oxford blue (the darker colour) and a Cambridge blue (lighter).

So, when your person predicts that the sky is blue, you actually what know know *what* blue they are predicting, and hence, in reality, you are asking "what spectrum of light do you predict?"

We have a prediction! Now all you need is to take your spectrometer and point at at the sky, and get some data, and viola, Now you might think "Well, they look similar, can we go now?" and the answer is no.

The answers to these questions are not a mystery, but, at least here, students don't get to see them until their fourth year of undergrad. After three years of learning theory and doing experiments are they given the clues to actually do the comparison, to do real, raw science.

But I have to run, and will write about that at another time.