The PAndAS Field of Streams: stellar structures in the Milky Way halo toward Andromeda and Triangulum

March 24, 2014
A cool paper this week, written by long-time collaborator, Nicolas F. Martin. Again, it's a PAndAS paper but the focus is not Andromeda but our very own Milky Way. How, I hear you say.

The starting point is the Field of Streams, a truly wonderful image of a massive area of sky taken as part of the Sloan Digital Sky Survey. Here it is 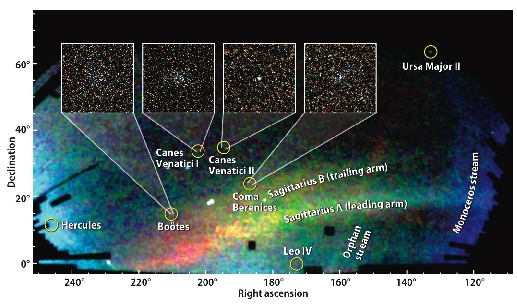 The Sloan Survey had many goals, but one of those was to look at the stars in our own Galaxy, especially in the Galactic Halo. If our picture of how galaxies form and grow are correct, basically by eating smaller systems, we should expect the halo to be full of the debris from things being consumed at the present time. And this is what we see in the Field of Streams.

The big swoop across the image is the tidal debris from the Sagittarius Dwarf Galaxy, which, even though it was only discovered in 1994, completely wraps the Galaxy. There's lots of other debris in there too, including the Monoceros Ring which wraps the outer parts of the disk we inhabit.

So, looking towards Andromeda, we also see all of the stars within our own Galaxy halo. What do we see? Well, it's easy to see in what Nicolas refers to as the Money plot (I'm not sure if he knew what the origin of this phrase actually is). Anyway, here's our new PAndAS Field of Streams. 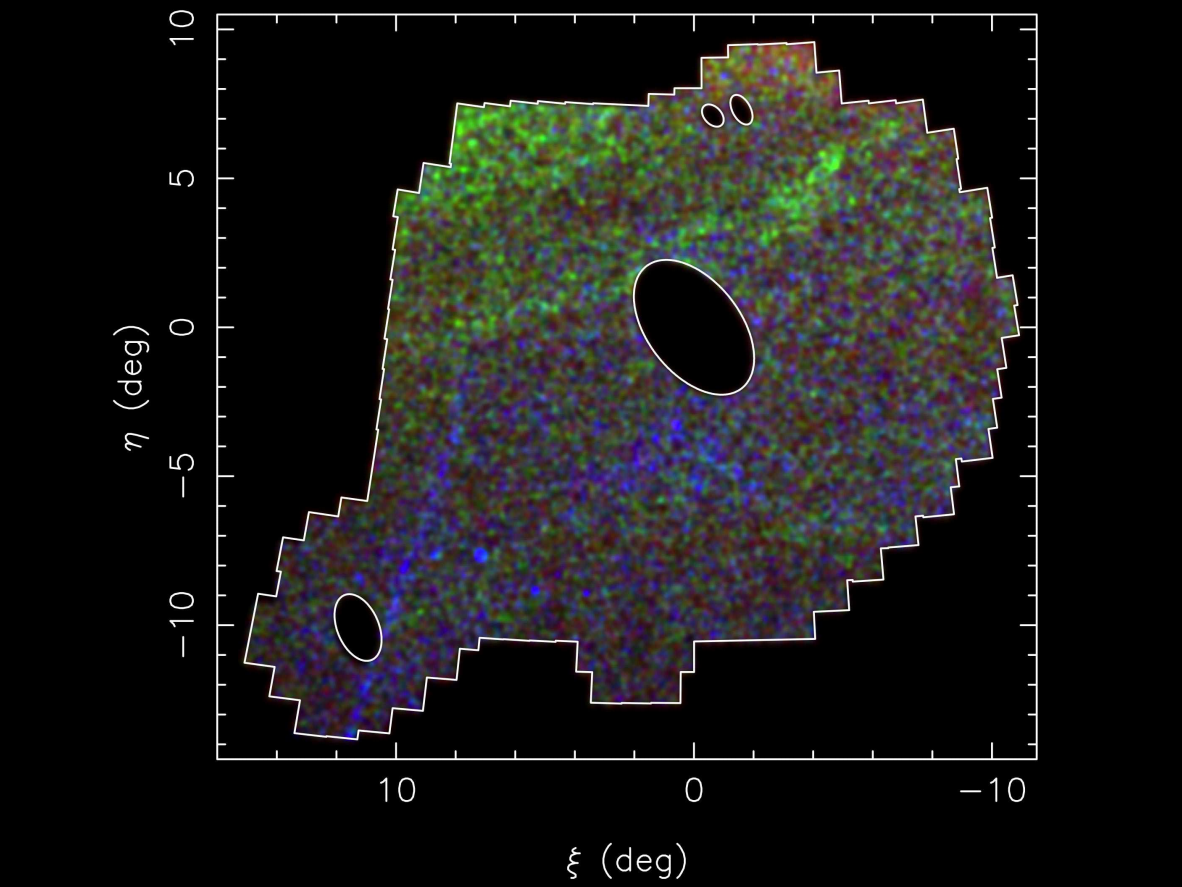 The big black ellipse is where Andromeda is, and the smaller one is M33, the Triangulum Galaxy. The outer white line is the "footprint" of the PAndAS survey. To give you an idea of how big the survey is, the distance between Andromeda and Triangulum is 15 degrees, which is 30 times the size of the full Moon.

What we've for here are stars that we've selected as being in the halo of the Milky Way, colour-coded by distance. And what we see is not a boring smooth distribution, but streams! Yay! So towards Andromeda is our own Field of Streams! In fact, it's a bit of a mess. Here's what we've got. 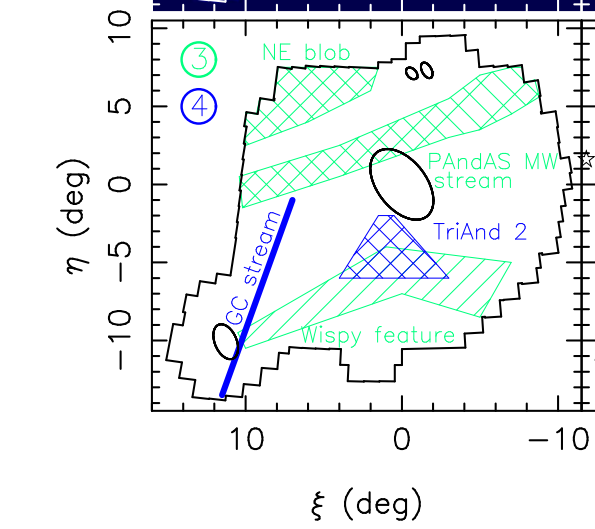 Lots and lots of stuff. The green hashed areas are big blobs of stars which are streamy, and the blue hashed area is another chunk of stars. The thin streak is a globular cluster stream, tidal debris from an individual cluster being destroyed; we're starting to see a growing number of these.

So, what have we learnt? Well, PAndAS is much smaller than the Sloan Digital Sky Survey, covering only ~1% of the sky, but we go significantly deeper. And we see lots and lots of streams, which suggests that if Sloan went as deep across the huge amount of sky that it can see, the field of streams would be absolutely amazing!

And the good news is that the next generation of telescope is going to do this. One of the best is the Large Synoptic Survey Telescope which is going to look at the sky over and over again, observing deeper and deeper. It will be on sky around 2021, and then will observe for about 10 years. I can't wait to see what the sky is going to look like, but I am sure it will be lovely.

But for now, well done Nicolas!

The PAndAS Field of Streams: stellar structures in the Milky Way halo toward Andromeda and Triangulum

We reveal the highly structured nature of the Milky Way stellar halo within the footprint of the PAndAS photometric survey from blue main sequence and main sequence turn-off stars. We map no fewer than five stellar structures within a heliocentric range of ~5 to 30 kpc. Some of these are known (the Monoceros Ring, the Pisces/Triangulum globular cluster stream), but we also uncover three well-defined stellar structures that could be, at least partly, responsible for the so-called Triangulum/Andromeda and Triangulum/Andromeda 2 features. In particular, we trace a new faint stellar stream located at a heliocentric distance of ~17 kpc. With a surface brightness of \Sigma_V ~ 32-32.5 mag/arcsec^2, it follows an orbit that is almost parallel to the Galactic plane north of M31 and has so far eluded surveys of the Milky Way halo as these tend to steer away from regions dominated by the Galactic disk. Investigating our follow-up spectroscopic observations of PAndAS, we serendipitously uncover a radial velocity signature from stars that have colors and magnitudes compatible with the stream. From the velocity of eight likely member stars, we show that this stellar structure is dynamically cold, with an unresolved velocity dispersion that is lower than 7.1 km/s at the 90-percent confidence level. Along with the width of the stream (300-650 pc), its dynamics points to a dwarf-galaxy-accretion origin. The numerous stellar structures we can map in the Milky Way stellar halo between 5 and 30 kpc and their varying morphology is a testament to the complex nature of the stellar halo at these intermediate distances.