A thousand shadows of Andromeda: rotating planes of satellites in the Millennium-II cosmological simulation

March 12, 2014
Before we start, well done to the Running Astronomer on her most recent race.

Papers are like buses. Well, their not really, but hot on the heels of yesterdays cosmology paper, another paper on the arxiv, this time with the friendly title of A thousand shadows of Andromeda: rotating planes of satellites in the Millennium-II cosmological simulation. This is a cool paper and harks back to our discovery last year of the discovery of a strange corotating plane of satellites in the Andromeda Galaxy.

Well, here we are more than a year later, and there is still no satisfactory answer to what it is doing there (or the equally strange, and badly named, Vast Polar Structure of the Milky Way).

Over the last few decades, we've built up a complex model for the formation and evolution of structure in the Universe, and the favourite picture, know as ΛCDM, works extremely well on large scales.
The Λ part refers to the influence of dark energy, where as the CDM = Cold Dark Matter is the influence of dark matter.

It is quite amazing how well this over all picture works, but we know where it falls over. It falls over on the small scale, on the scale of individual galaxy halos.

I've written about the missing satellite problem, the fact that our models of galaxy formation predict that a galaxy like our own Milky Way should be accompanied by hundreds and thousands of smaller galaxies, while when we look on the sky we see a few dozen.

But there is a slippery aspect to studying galaxy formation, and that is the complexity of gas physics. Good old dark matter is nice, simple and well behaved. Gas, however, can cool, collapse, form stars, go supernova, and, well, just be bloody messy. And such messiness is embodied in complicated mathematics (some of which are approximations as you are trying to study the motions, temperatures and densities of gas on scales much smaller than your simulation can resolve).

With this complexity, you can invoke gas physics in the early universe to blow away gas, basically killing the star formation in many dwarf galaxies dead. So, with this, we are surrounded by thousands of stillborn dwarfs. We just can't see them.

Not everyone is satisfied with this answer and wonder if there is something more fundamentally wrong with physics that needs to be fixed up.

The plane of satellite galaxies is another complexity that our cosmological model has to explain.

When I give talks on this, I get a few hand-wavy dismissals that the complexity of gas physics or accretion could explain this weird plane, and there is nothing to worry about, and everything is lovely with the world.

This is where this new paper comes in. Written by long time collaborator, Rodrigo Ibata, we take a look at one of our best computer models for galaxies like our own Milky Way. This is the Millennium Simulation of structure formation, which is a massive computer simulation which is open to all to play with; if you find yourself with the lose end, I recommend that you do, and you too may find something cool about the Universe.

So, what do we do? Well, we look at the satellites in the galaxies, and ask "What are their properties?", and importantly, "Do they look anything like the observed plane of satellites?". Essentially, we want to see if we can find a significant planes as thin as the one we see in Andromeda *and* has the correction rotational signature. 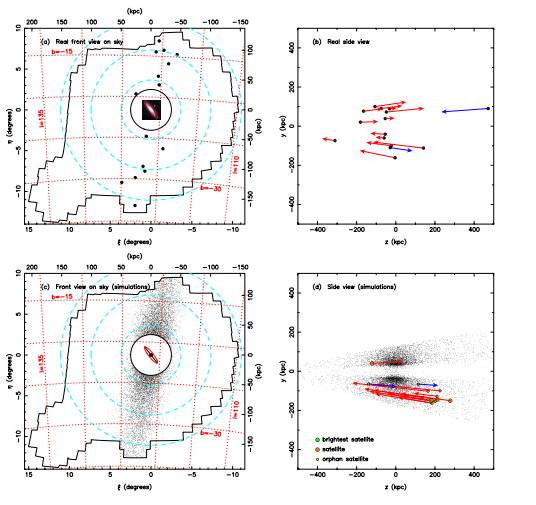 So, we spend a lot of time selecting out planes of satellites, and there's lots and lots of them. Chuck down enough (almost) random points, and you will find nice planes.

But the big question, the important question, is how many of the planes are moving together. A little statistical machinations later, what do we find. We find.... 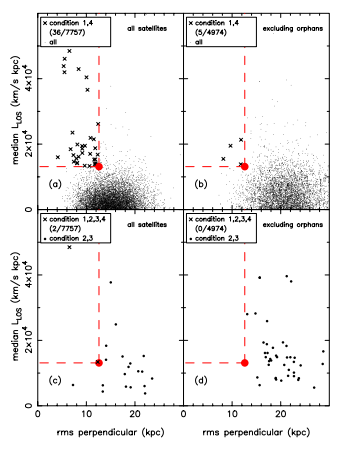 after slicing to extract the rotating planes, we find... we find... drum roll....

Planes like we the one we observe are extremely rare (pretty close to impossible) if we want both the positions and velocities to match.

Of course, this is assuming that there the entire ΛCDM idea is correct, and we take it at face value. Maybe somewhere we are missing the additional complexity through the physics of gas and messy accretion, and maybe everything as wonderful as such planes are everywhere. But sometimes brushing problems under the carpet is a little like griping onto a security blanket. And if you are planning to give me that hand wave I get in talks, the one that suggests the world is wonderful and that ΛCDM explains all, remember I will be thinking that it tells me more about you than what I am talking about.

But other than that, well done Rod!


A thousand shadows of Andromeda: rotating planes of satellites in the Millennium-II cosmological simulation

In a recent contribution, Bahl \& Baumgardt investigated the incidence of planar alignments of satellite galaxies in the Millennium-II simulation, and concluded that vast thin planes of dwarf galaxies, similar to that observed in the Andromeda galaxy (M31), occur frequently by chance in -Cold Dark Matter cosmology. However, their analysis did not capture the essential fact that the observed alignment is simultaneously radially extended, yet thin, and kinematically unusual. With the caveat that the Millennium-II simulation may not have sufficient mass resolution to identify confidently simulacra of low-luminosity dwarf galaxies, we re-examine that simulation for planar structures, using the same method as employed by Ibata et al. (2013) on the real M31 satellites. We find that 0.04\% of host galaxies display satellite alignments that are at least as extreme as the observations, when we consider their extent, thickness and number of members rotating in the same sense. We further investigate the angular momentum properties of the co-planar satellites, and find that the median of the specific angular momentum derived from the line of sight velocities in the real M31 structure ( km/s kpc) is very high compared to systems drawn from the simulations. This analysis confirms that it is highly unlikely that the observed structure around the Andromeda galaxy is due to a chance occurrence. Interestingly, the few extreme systems that are similar to M31 arise from the accretion of a massive sub-halo with its own spatially-concentrated entourage of orphan satellites.