November 24, 2013
It's the 50th anniversary of both the assassination of John F. Kennedy and the first episode of Doctor Who, and yes, I did get up at 6:50 and watched The Day of the Doctor. So, today's post is about Time and Relative Dimensions in Space.

Everyone loves a bit of relativity, even though its consequences can be quite mind-bending. Of course, one of the things that happens is that when things are moving relative to each other you get length contraction, and people disagree on how long something is. Length contraction is responsible for some cool physical effects, including explaining why two parallel currents attract one another.

Check out this excellent video by Derek Muller on Veritasium which explains this.
While the video is mostly correct, there is something which is not quite right. Notice the bit where he drives passed himself in a car, he sees the car squeezed due length contraction. So, the question I want to look at is "What do things look like moving at relativistic speeds?"

To answer the question, we need to think about two things. Firstly, we need to consider how we transform coordinates from the "moving" object into the coordinates of the observer. Let's assume the moving object is a sphere. In its own coordinate system is is sitting there, doing nothing, with its clock ticking. To the observer, the sphere is moving, and so its coordinates are changing, and its clock is ticking at a different rate to the observer.

We've known how to transform between the coordinates of the two for more than 100 years, and what we use is the Lorenz transformation. Using this we can work out where the points on the sphere are in the observer's coordinate system as a function of the observer's clock - easy!

Here's the Lorenz transformation (from wikipedia).

Most of you will recognise this as being nothing but a matrix multiplication - the mathematics of special relativity is really not that difficult.

But remember the question is "What do we see?" And what we need to consider is the time that light rays take to travel from the sphere into the eye of the observer.

How do we work out the path that light will follow? That's quite easy, as light rays travel along what is known as "null geodesics" and it is simple to trace out the path through space-time as it must follow.

Again, nothing complicated. Just a bit of algebra. Any high school student can do this :)

So, all you need to do is pick a time at the observer, as we want to consider all light rays that arrive at a certain time, and fine out at what time did photons leave the sphere to arrive at the observers eye. This is a bit of algebra, but it's a little "non-linear" so I use a small root finding algorithm to find the solution (for the curious, I use brentq function in python).

So, what do we get? To start with, let's just throw some random points onto the surface of the sphere and get it moving passed the observer 90% of the speed of light across the sky. Here's an image of the points on the sky as seen by the observer. Eermmmm. It looks round. Why isn't squashed in one of the directions? 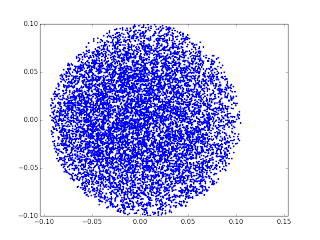 Hmmmmm. It still looks like a circle on the sky. Just where has the length contraction gone?

Let's investigate this a little more. Instead of throwing down points at random on a sphere, let's make the moving object a cube, so we'll gave eight points at the corners of the cube and one at the centre.
Here's the cube at rest, as seen by the observer. 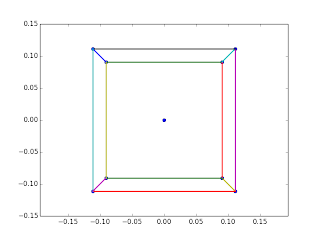 Lovely! Now, let's get this cube moving. Here's what we see if the cube is moving at 10% the speed of light. 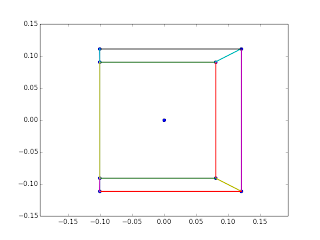 Hmmm. The cube is not contracted, but appears to have rotated slightly. What if we up the speed to 50% the speed of light? 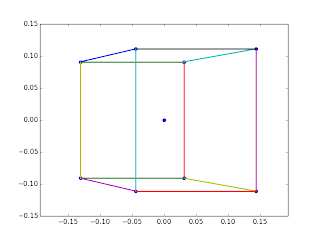 Still no contraction, but the cube definitely appears to be rotated! OK - let's up the speed to 90% of the speed of light. 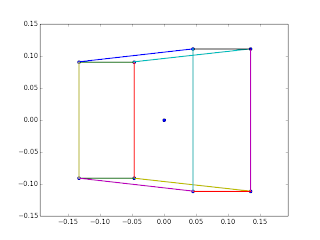 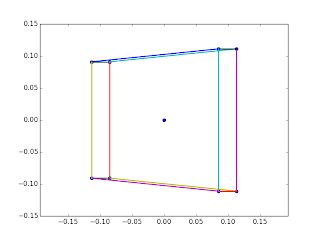 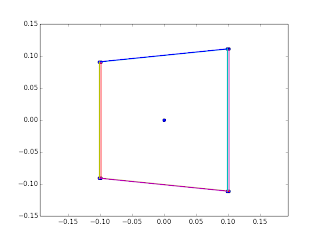 Now, none of this is new. The effect, known as Terrell rotation, was published by Terrell and separately by Roger Penrose, in 1959, although it was noted as far back as 1924 by Anton Lampa, although it doesn't appear in too many textbooks. There are some great articles out there on the interwebs about the optical effects of seeing things moving at relativistic speeds; I heartedly recommend you have a read. If I get some time of Christmas, I'll write about another favourite of mine, namely Bell's spaceship paradox.

Before I go, however, I was quite amazed how the ABC on both TV and radio were clammering to interview whovians to ask them what they thought of the new episode, and who their favourite Doctor was. However, some of us have a long memory and remember how the ABC, through the Chaser, presented fans of Doctor Who.
How things have changed :)
Intermission Physics
Location: Sydney NSW, Australia