Major Substructure in the M31 Outer Halo: the South-West Cloud

November 09, 2013
Another week has flown by and I don't know where the time went. But another good week in terms of research with a new paper accepted.

This one is led by postdoctoral researcher, Nick Bate, with newly minted doctor, Anthony Conn, and PhD student, Brendan McMonigal. The focus of the study, substructure in the halo of the Andromeda Galaxy from, you guessed it, the rather fantastic Pan-Andromeda Archaeological Survey (PAndAS). The focus this time is a particularly prominent blob, known as the South-West Cloud (or, more colloquially to us, Japan). Here's a map of the substructure again. 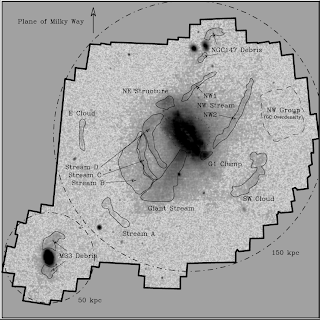 OK - I'll admit that the SW-Cloud doesn't look a lot like Japan, but the name stuck.

As you can see, it's a reasonably big chunk of stuff, but we want to know what it is. And that's the focus of the present paper. This is my favourite picture from the paper, presenting the density of stars in and around the SW-Cloud. 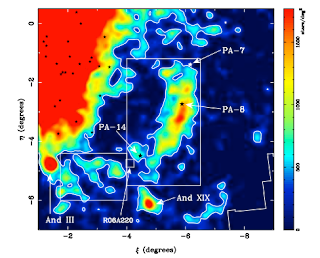 As you can see, it's a bit of a mess, but the SW-Cloud is clearly visible, as is a small dwarf galaxy (And XIX). The little stars labelled PA-7, PA-8 and PA-14 are really interesting as they are globular clusters, balls of roughly a million stars that I wrote about in the previous post. As I've written about before, it looks like a lot of these globulars were brought in on galaxies that have now been disrupted.

So, it looks like the SW-Cloud used to be a dwarf galaxy, with some of its own globular clusters, that has fallen into Andromeda and is being tidally torn apart. Now, that's interesting, but what else can we learn?

A while ago, I talked about the work Anthony was doing to measure the distances to M31 by locating the tip of the red giant branch, a very useful distance indicator. Once we have isolated the stars in the SW-Cloud, getting rid of all those annoying stars within our own Galaxy, we can search for the brightest red giant stars, which are the ones that define the tip. Here's the luminosity function. 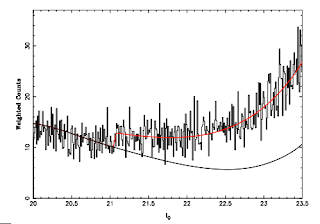 Slightly hard to see (this stuff isn't easy!) but there is a set at around 21 which is the location of the tip.

We chopped the SW-Cloud into pieces, and calculated the distance to each bit, and this is what we find; 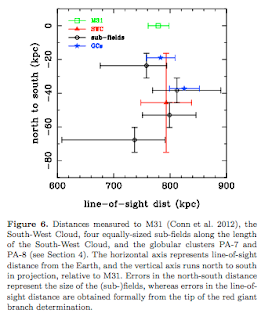 The black points are the individual fields, and you can see that the measurements are a bit noisy, but the red is the average of the three, which puts the SW-Cloud at almost the same distance and Andromeda itself. But the cool thing is that two of the globulars are at the same distance, slowing that they are all part of the same system.

But, as they say, there is more! We were also to work out the metallicity of the SW-Cloud, which means we are working out how chemically enriched the stars are. Remembering that the first stars were purely hydrogen and helium, the amount of chemical enrichment is a measure of how many generations of stars a population has gone through; in every generation, heavier chemical elements are produced and they pollute the gas clouds which make the next generation of stars.

Big galaxies like the Milky Way have lots of gas and are constantly producing stars, but dwarfs, which have a much smaller gravitational pull, can easily lose their gas and so only have a very limited number of stellar generations. This means that the smallest are usually metal-poor. What's the chemical make up of the SW-Cloud? This figure tells us all; 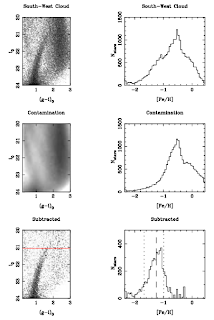 The left-hand panels are the colour-magnitude diagrams, and the thick black smudge up the middle of the top one is the red giant branch of the SW-Cloud. The middle panel is the "background" which is all the stars in the Milky Way (and some mis-classified background galaxies) which we subtract off, leaving the nice piccy at the bottom.

The right-hand panels are the the distribution of the metallicity of the stars in each of the colour-magnitude diagrams, the bottom is that for the SW-Cloud. We can see that the metallicity is about -1.3, which is not really metal-poor, and not really metal-rich. This tells us that what ever the SW-Cloud was originally, it was not a small dwarf galaxy, but would be amongst the largest that we know. Looking at other similar dwarfs, we can see that the SW-Cloud has lost about 25% of its mass, meaning that we must be looking at a very recent disruption.

How cool is that? Right, that's one substructure down, quite a few more to go!

Major Substructure in the M31 Outer Halo: the South-West Cloud

We undertake the first detailed analysis of the stellar population and spatial properties of a diffuse substructure in the outer halo of M31. The South-West Cloud lies at a projected distance of ~100 kpc from the centre of M31, and extends for at least ~50 kpc in projection. We use Pan-Andromeda Archaeological Survey photometry of red giant branch stars to determine a distance to the South-West Cloud of 793 +/- 45 kpc. The metallicity of the cloud is found to be [Fe/H] = -1.3 +/- 0.1. This is consistent with the coincident globular clusters PAndAS-7 and PAndAS-8, which have metallicities determined using an independent technique of [Fe/H] = -1.35 +/- 0.15. We measure a brightness for the Cloud of M_V = -12.1 mag; this is ~75 per cent of the luminosity implied by the luminosity-metallicity relation. Under the assumption that the South-West Cloud is the visible remnant of an accreted dwarf satellite, this suggests that the progenitor object was amongst M31's brightest dwarf galaxies prior to disruption.