Firstly, there was the lack of a dark matter detection by the Lux experiment. The reports around the web on this have been generally OK, but some have indicated that this is somehow a failure. But what is important, and is often not appreciated, is that in science the lack of a detection is as important as a detection. Negative results like this rule out possibilities and so are vital in cutting down the possibilities for what dark matter is. In fact, a lot of dark matter searches basically following the Holmes adage "eliminated the impossible, whatever remains, however improbable, must be the truth". Not seeing something increases our knowledge.

The second made me a little unhappy. The article in question appeared in the Conversation and was titled "Is it possible to add statistics to science? you can count on it". The target of the article is the award of the Prime Minister's Prize for Science to Terry Speed at the Walter+Eliza Hall Institute of Medical Research.

Now, don't get me wrong! I'm not unhappy about the existence of the award (I think it is great when science is recognised) and Terry Speed is a very worth recipient whose expertise in statistical analysis and bioinformatics has advanced cancer research.

No, the thing that annoys me is the title of the article - "Is it possible to add statistics to science? You can count on it". I have mentioned this before, and I will say it again, but the situation is not that science is over here and statistics is over there, but statistics (or more accurately inference) is absolutely and utterly central to science. Often people think science is observation and experimentation on one side, and theoretical study on the other. But the meat of science is the interface between the two, and to do that you need to be statistically (and also mathematically) adept.

It depresses me that we struggle to convince our students of this during their undergraduate years :(

But that brings me to the good news, the acceptance of a new paper by PhD student Foivos Diakogiannis. The question is a seemingly simple one, namely do globular clusters contain dark matter. Globulars are balls of roughly a few million stars whizzing about together and they orbit galaxies. They are a bit weird, and people are unsure of their formation mechanism.

If they collapsed from gas clouds in the very early universe then they should not have lots of dark matter in them, but if they formed like dwarf galaxies they would have formed from gas pooling in a dark matter halo and they would be dark matter dominated.

The focus of this paper is a particular cluster, NGC 6809, also known as M55. Here's a lovely picture of it. A few years ago we took spectra of the stars in this globular cluster, and we used the Doppler shift to measure their speeds. Here's a picture of the speeds that we saw, as a function of the distance away from the centre of the cluster. 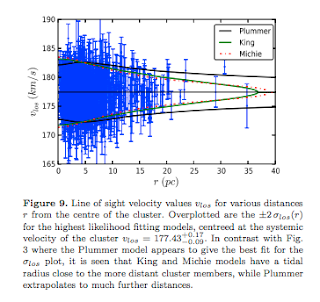 So, the stars seen towards the centre zip around the fastest, and they go more slowly at the edge.

How do we work out the mass? It is actually a very tricky problem as we only know the velocity along the line of sight, and don't know the velocity on the sky. But we also know how the light is distributed, and what we want to do is make a "self consistent" so that we have we can predict the observed light distribution and observed velocity profile, and that the globular cluster is stable.

How we do this is quite mathematical, and so read the paper if you are interested, but the we used inference, and in particular Bayesian analysis (I'll say it again, this kind of thing is central to science). But here's an example of the fits that we get 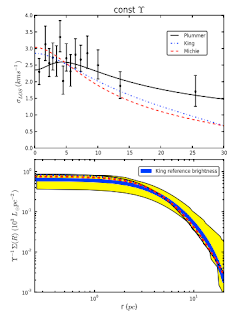 Notice that the velocity data is a bit ratty, but we get good fits.

And the result? We have shown conclusively that this particular cluster is not dominated by the presence of dark matter, and so they were not formed in the same way as objects like our own Milky Way. How did they form? We don't know, but our results are giving us some more clues.

The precise cosmological origin of globular clusters remains uncertain, a situation hampered by the struggle of observational approaches in conclusively identifying the presence, or not, of dark matter in these systems. In this paper, we address this question through an analysis of the particular case of NGC 6809. While previous studies have performed dynamical modeling of this globular cluster using a small number of available kinematic data, they did not perform appropriate statistical inference tests for the choice of best model description; such statistical inference for model selection is important since, in general, different models can result in significantly different inferred quantities. With the latest kinematic data, we use Bayesian inference tests for model selection and thus obtain the best fitting models, as well as mass and dynamic mass-to-light ratio estimates. For this, we introduce a new likelihood function that provides more constrained distributions for the defining parameters of dynamical models. Initially we consider models with a known distribution function, and then model the cluster using solutions of the spherically symmetric Jeans equation; this latter approach depends upon the mass density profile and anisotropy  parameter. In order to find the best description for the cluster we compare these models by calculating their Bayesian evidence. We find smaller mass and dynamic mass-to-light ratio values than previous studies, with the best fitting Michie model for a constant mass-to-light ratio of  and . We exclude the significant presence of dark matter throughout the cluster, showing that no physically motivated distribution of dark matter can be present away from the cluster core.