Who discovered dark matter in galaxies?

July 21, 2013
Many astronomers get their history of the subject from text books, and generally discoveries are presented as neat, tied up bags with statements like "X discovered Y". However, now and again, people look more deeply and the story is always more complex.

What brought this to my mind was a recent series of papers on just who should be credited with the discovery of the expansion of the universe. This was recently summarised in a wonderful article by Virginia Trimble called Anybody but Hubble! (I wish I could write as well as Virginia). 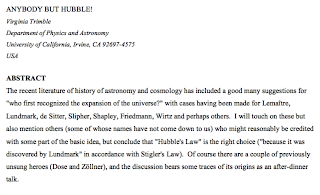 I recommend you have a read. History is messy.

I decided to look at the question of who discovered dark matter in galaxies as the textbook give a very "X discovered Y" answer to this, and gave a brief presentation at our Astro Morning Tea. But I am not a historian, and this is not complete, but just what I found after a couple of hours of looking around (thanks Brad for his input).

OK, let's start with dark matter. The first clues about the existence of dark matter was not in galaxies, but in clusters of galaxies (and this statement ain't that simple). The person generally credit is given to this man, Fritz Zwicky, 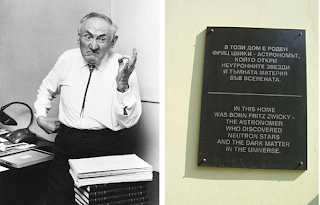 He was looking at the motions of galaxies in clusters and concluded that there is more mass present that indicated by visible light, and that "dark matter" was needed to hold the clusters together.

Zwicky was famous for being a prickly person, and (and I think I've mentioned this before) he is famous for inventing the phrase "spherical bastard" 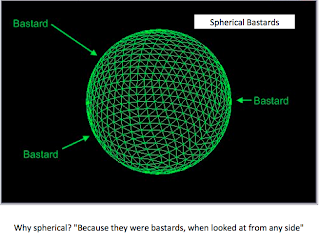 but there is no doubt that he was a truly original thinker.

The textbook answer for galaxies beings in 1970 with the work of this famous astronomer, Vera Rubin,

with her collaborator, Kent Ford, she measure the speeds that stars were moving in our nearest cosmic companion, Andromeda galaxy, both in the centre, and then out into the disk. What did they find? Well, heres the rotation curve; 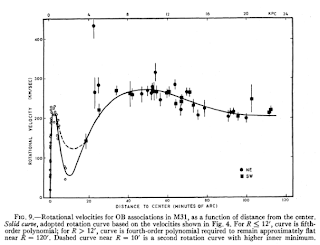 As you can see, stars are moving around at a few hundred kilometres per second. Importantly, however, as we go to larger distances, the speed doesn't drop. In fact, it stays roughly constant. If the only mass in Andromeda was associated with the stars, then it should drop off, so there must be more matter there than we can see.

With a decade's more work, Rubin had shown that Andromeda was not a one-off, but these constant rotation curves were seen in all of the spiral galaxies they looked at 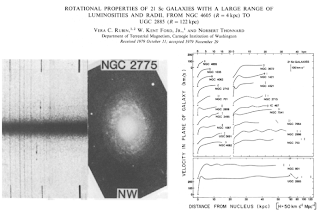 and when we had radio observations even beyond the stars, we could also see that the gas was moving around that the same speed as the stars, at much larger distances. 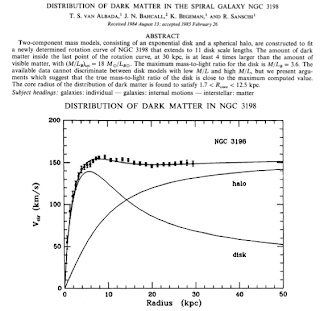 There is dark matter in spiral galaxies. Lots of it.

But being in Australia, the picture is not so clear. Some of you may have heard that last year, astronomer Ken Freeman, won the (very much deserved) Prime Ministers Science Prize 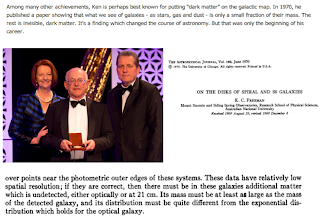 (Ken is the one in the middle :) The prize was for Ken's work in 1970, where (as the snippet from his paper shows) he discovered evidence for dark matter is galaxies, based upon how the light is distributed. Remember, this was the same time that Rubin and Ford were doing their work on Andromeda!

But reading Ken's paper reveals that he cites earlier work that suggested that there is more mass in galaxies than is visible, one of them from my own The University of Sydney. Here's the paper, from 1966. 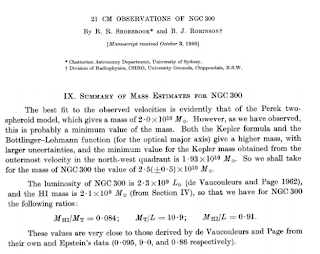 The important number in there in the summary is the MT/L which is the total Mass to Light Ratio; if this was about unity, it would mean there is as much mass there as indicated by the light, but we see that in this galaxy, the lovely NGC 300, this ratio is almost 11!

The even more interesting thing, is that this paper cites an even earlier work, from 1961 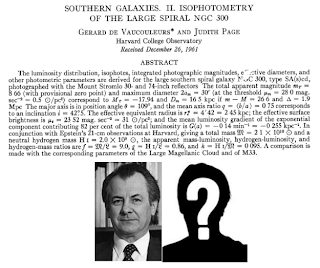 who calculated that this value is 9, again indicating that there is more mass than is apparent from the distribution of the light.

At this point, I had to get back to work, and I didn't chase it further, but it should be clear that the answer to "who discovered dark matter in galaxies?" is not a clear cut question, with a straight-forward answer. This is not to take away from the great work done by Rubin and her collaborators (which is often the textbook and wikipedia answers), but just to illustrate that the actual history of scientific discovery is often messy.

If you are interested (and you should be) I recommend you have a read of these superb lecture notes by my colleague, Joss Bland-Hawthorn, especially the appendix that looks at this question in a lot more detail. It doesn't make things simpler :)