July 03, 2013
I have just finished a major round of grant and postdoc reviews, and have been wiped out for a number of weeks. Back to science at last!

But last week I took some time out from reviewing and gave a talk on "My Life as an Astronomer" to the 2nd/3rd Pennant Hills Scouts Group. 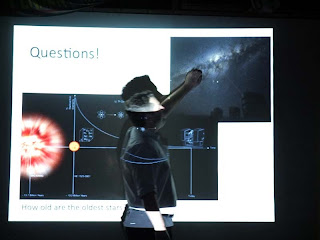 (thanks to Buffalo for the use of the picture). We spoke about a lot of things, from what life is like as a professional astronomer, from the big bang to the oldest stars, life on planets at the centre of the Milky Way to neutrino telescopes under the ice in antarctica. It was a broad snapshot of the Universe as we know it.

The great thing about talking to kids about astronomy is the constant stream of questions (so many questions that the scout leaders had a hard time keeping everyone in check), and the fact that questions were deep, really wanting to understand what is going on. When the first question is "What would happen if the Universe had corners?", you know that you are in for an interesting time.

The kids were enthusiastic (and not just because astronomy is cool!), and hopefully they will think that a career in science is a good thing to consider (although reporting seems to suggest that science in schools often beats this out of them.)