April 06, 2013
An astro-ph post today. I've written previously about some papers that I've published looking at a "new" cosmological model, which is claimed to be superior to the currently favoured model, the ΛCDM  cosmology. This model, known as the Rh = ct universe, is supposedly simpler, but in truth, it is not. And what's more, it is not a good description of the Universe we observe. If you're interested, you can read about it here.

What I did is consider four cosmological models, the standard ΛCDM, with a present day matter density of 27% of the total, and a dark energy component making up the rest. The important thing is that the dark energy has an equation of state of -1. I also looked at a pure Rh = ct universe, which only has a dark energy component, but with an equation of state of -1/3. And then I added some matter to this pure Rh = ct cosmology, one with 27% matter at the present time, and one with 5% at the present time; this latter limit is basically the baryonic matter (atoms, stars, gas, people) we can see.

So, what do those changes do? They basically change the the look-back time verses redshift properties of the universes. In fact, they look like this 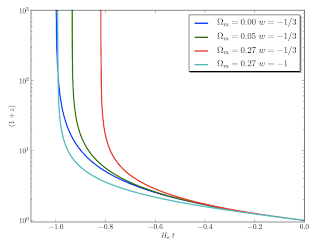 The bottom axis is in units of ~13.6 billion years. What the observational consequences of these different models.

Let's start with the quasars issue. We see very bright quasars in the distant universe, at redshifts up to ~7. These are thought to be power by supermassive black holes, with masses or order a few billion times that of the Sun. The problem is that if we assume some model for the growth of these black holes, namely that they were born a few times a mass of the Sun from supernovae explosions amongst the first stars, then there is very little time in the universe for them to grow. This picture explains the issue; 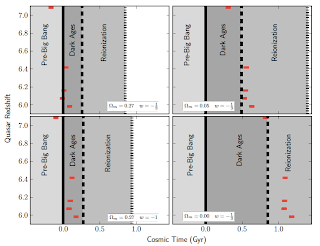 Look at the bottom left panel, which represents the ΛCDM universe. The solid black line represents the Big Bang. After the Big Bang was the dark ages, a period where gas was pooling together, but there were no stars. When the first stars ignited, the universe was reionized by the starlight (after the big dashed line).

The lower right hand panel is the same, but in the Rh = ct universe. As we've changed the look-back time verses redshift, then now all of the seed black holes are formed in the time when we have stars - success!! Well, no. Looking at the upper panels, then adding 5% matter into the mix drags the epoch of black hole birth to be at the very start of the epoch of reionization, and adding a more realistic 27% results in basically the same problem as ΛCDM.

Essentially, what is happening is that in the early universe, matter dominates, and so adding even a morsel makes a mess of the expansion needed for the Rh = ct universe.

We see the same with inflation. This is a little more complicated to explain, but here's the picture to tell you what is going on. 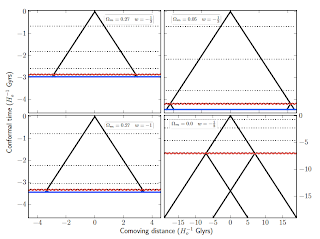 These are the same universes, but presented in conformal coordinates. I've mentioned these before, but if you want a reminder, have a look at this excellent article. Again, lets start with ΛCDM in the lower left; so we have distance along the bottom and time up the side, and the blue indicates the Big Bang and  the red is the epoch of recombination, where the universe had cooled enough for electrons to join with protons to make hydrogen atoms.

The triangles are light cones, with us at the apex. So, the properties of the Cosmic Microwave Background are determined by what goes on between the blue line and the red line. If you look very closely, you'll see that there are a couple of small triangles between the red and blue, and the fact that these two little triangles don't overlap is a manifestation of what is known as the Horizon problem; essentially as these little light cones do not overlap, then these patches of the sky were never in causal contact (basically, they never knew about each others properties), so why do we see different patches of the sky at (nearly) the same temperature.

The lower right presents the same situation in the Rh = ct universe. Something magical has happened! The epoch of recombination is still there, but where's the Big Bang? It's moved, and moved a long way back to a conformal time of -∞! The little triangles have become big triangles, and overlap! Horizon problem solved!!

Not so fast! Look at the top two panels, where we've added a little bit of mass to the Rh = ct universe. The Big Bang is back with a vengeance, and the triangles are little again, meaning we have the Horizon problem again. Matter in the Rh = ct universe messes things up again.

You might be asking how our standard cosmological model solves this. Essentially, we have a burst of inflation in the early universe, which extends the distance between the Big Bang and recombination, but doesn't push the Big Bang back to -∞. Here's a picture from a 1991 by Ed Harrison which explains this nicely 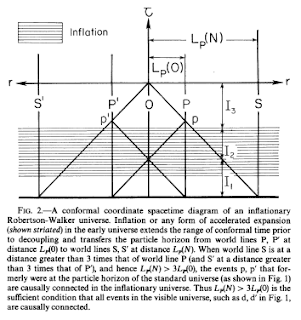 Now, there is a get out of jail card for the Rh = ct universe; what if we have matter in the universe but change the properties of dark energy (namely the equation of state) to make it behave as if there was only dark energy with an equation of state of -1/3. Well, what would you need. 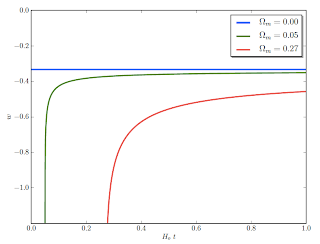 Summary, the presence of matter messes up the Rh = ct.

Well done... well... me... :) I'm particularly proud of the opening statement of the abstract.

It is generally agreed that there is matter in the universe and, in this paper, we show that the existence of matter is extremely problematic for the proposed Rh = ct universe. Considering a dark energy component with an equation of state of w=-1/3, it is shown that the presence of matter destroys the strict expansion properties that define the evolution of Rh = ct cosmologies, distorting the observational properties that are touted as its success. We further examine whether an evolving dark energy component can save this form of cosmological expansion in the presence of matter by resulting in an expansion consistent with a mean value of <w> = -1/3, finding that the presence of mass requires unphysical forms of the dark energy component in the early universe. We conclude that matter in the universe significantly limits the fundamental properties of the Rh = ct cosmology, and that novel, and unphysical, evolution of the matter component would be required to save it. Given this, Rh = ct cosmology is not simpler or more accurate description of the universe than prevailing cosmological models, and its presentation to date possesses significant flaws.