ARGOS IV: The Kinematics of the Milky Way Bulge

April 28, 2013
Another week gone, and no time for too much deep thinking (although progress is being made, so hopefully will have some interesting things to report). Luckily, the smart students out there are squirreling away, and so today I can present the latest in the study of the galactic bulge by ANU student
Melissa Ness.

I've written before about this really cool study, using the AAOmega Spectrograph on the might Anglo-Australian Telescope to measure the speeds and chemical make-up of stars in the Galactic Bulge, the centre of our Milky Way galaxy. This is hard work, as there are a lot of stars spread over a large amount of sky, and so to get lots of spectra, you need to use the multi-fibres and large field of view of AAOmega.

This has been a mammoth task over the last few years, with us taking 28,000 spectra, and in this study almost 17,5000 stellar velocities were used. But what is it we want to know?

Well, the present day shape, velocities and chemistry of the Milky Way is a consequence of its birth and growth, dependent on lots of different factors, such as what dark matter collapses to form the seed of the galaxy in the early universe, to the way that gas flows in and cool, and the way that stellar populations have evolved. So, if we can pick-apart the present day structure, then that will tell us about the formation history of the Galaxy, a topic known as galactic archaeology.

On the face of it, the bulge of the Milky Way looks quite simple, with stars basically buzzing about randomly, but in fact, the way the stars are distributed and the formation history means that the underlying dynamics can be quite complex. So, what did we find?

Firstly, here's the fields we observed 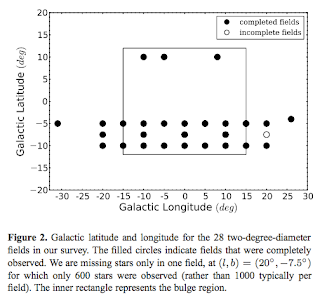 Even though the AAOmega spectrograph is mighty, you can see that the coverage is still relatively sparse, and so we are trying to work out the dynamics from a series of key-hole views through the Bulge. We, of course, would like to cover the entire Bulge, but that would take years and years of observing (and they won't let us have complete control of the telescope!).

Here is the rotation curve for the bule - yes, it rotates, and also the velocity dispersion. So, the motions of the stars are not orderly orbits, like the planets in the Solar System, but a mixture of orderly and random buzzing about.

Essentially, we can see that the velocity depends upon the location on the Bulge, and the latitude of the observations. Things get really interesting when we start to slice the stars up in terms of metallicity (which means chemical make-up). 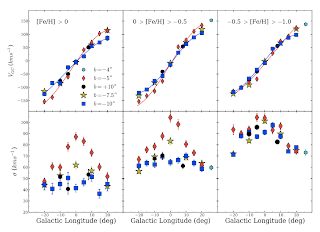 Strongly negative numbers means the stars are chemically poor, while the values close to 0 are chemically richer (it's a logarithmic scale); now, all of these stars are almost entirely hydrogen and helium in their atmospheres (the bits we get the light from), but the higher metallicity stars are have more heavier elements than the metallicity poor stars. These extra elements come from the pollution by supernovae of gas clouds from which the stars were formed.

How do we start to understand these curves. Remember, we are looking through some key-hole views into the Bulge, but things are a little more complicated than that. The problem is that the Bulge contains structure, firstly large scale structure in the form of a Galactic Bar. Here's a model of the distribution of stars in the galaxy 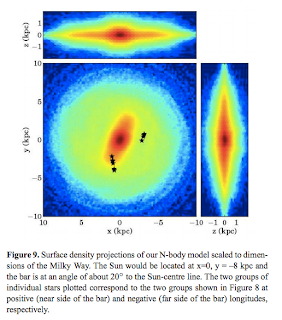 We're located at 0 on the x-axis, and -8.5 kpc on the y-axis, and you can see that the Bulge (the red bit) is elongated into a bar, and it's almost along the line-of-sight. In fact, this complicated geometry has really only been known in detail for the last two decades.

The fact that we see stars with differing metallicities having different velocity signatures is telling us something interesting. It is telling us that the formation of the Bulge was a complicated thing. I could not have formed just as a single mass of stars, from a single gas cloud (if it did, we would expect the stars to be very similar metallicities) but something else happened, something more complicated.

It can be hard to unravel just what the detailed processes were, but what we can do is try and compare various models to the observed data. Here's one such comparison; 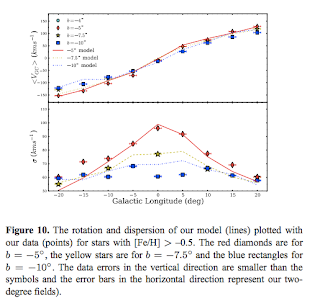 Pretty good! I don't know about you, but I am always amazed when you take ideas (and equations) formed in peoples heads, and make predictions for what you should see in a mass of stars located many light years away, and it works!

The fit is not perfect, however - there are places where the data and model differ significantly - and it is clear that we cannot have the whole story yet. But the general picture of a Bulge composed of multiple populations and a bar, which transitions into the disk populations that we are part of, is correct. Now we need to workout the complicated structure hidden away in the Bulge, which will provide us with even more clues to its hidden history is underway. Can't wait to unravel the secrets!


ARGOS IV: The Kinematics of the Milky Way Bulge

We present the kinematic results from our ARGOS spectroscopic survey of the Galactic bulge of the Milky Way. Our aim is to understand the formation of the Galactic bulge. We examine the kinematics of about 17,400 stars in the bulge located within 3.5 kpc of the Galactic centre, identified from the 28,000 star ARGOS survey. We aim to determine if the formation of the bulge has been internally driven from disk instabilities as suggested by its boxy shape, or if mergers have played a significant role as expected from Lambda CDM simulations. From our velocity measurements across latitudes b = -5 deg, -7.5 deg and -10 deg we find the bulge to be a cylindrically rotating system that transitions smoothly out into the disk. Within the bulge, we find a kinematically distinct metal-poor population ([Fe/H] < -1.0) that is not rotating cylindrically. The 5% of our stars with [Fe/H] < -1.0 are a slowly rotating spheroidal population, which we believe are stars of the metal weak thick disk and halo which presently lie in the inner Galaxy. The kinematics of the two bulge components that we identified in ARGOS paper III (mean [Fe/H] = -0.25 and [Fe/H] = +0.15, respectively) demonstrate that they are likely to share a common formation origin and are distinct from the more metal poor populations of the thick disk and halo which are colocated inside the bulge. We do not exclude an underlying merger generated bulge component but our results favour bulge formation from instabilities in the early thin disk.