April 21, 2013
A weekend at home with the kids, with yesterday being wiped out by huge downpours from sunrise to sunset. Unfortunately, work has been full on, with a thousand different things going on, so no time to muck around. But we have another paper accepted, so here's a little summary.

This week's paper is by PhD student, Jovan Veljanoski, working at Edinburgh's Institute for Astronomy. This is another paper based upon our extensive Pan-Andromeda Archaeological Survey (PAndAS) of Andromeda. As I've noted before, this survey reveals a mass of substructure in the outskirts of Andromeda, as well as a growing population of dwarf galaxies. It also reveals lots of globular clusters, balls of a million or so stars orbiting Andromeda.

The key thing in this study is the velocities of the globular clusters. Why? Well, their velocity depends upon the mass they are orbiting, so if you get lot of velocities, then you can measure the mass. But, of course, it is never as simple as that :)

Why? Well, in the Solar System, all of the planets have nice, almost circular orbits, and we have a very well define laws of motion as the Sun is effectively is a point mass in the middle. Galaxies are trickier as the mass is spread out, and the gravitational field isn't necessarily spherical. Also, globulars have higgledy-piggledy orbits, more like the comets of the Solar System, and some are moving roughly together, as they accompanied infalling dwarf galaxy. All of this makes things a little messier.

Anyway, let's start with a picture. 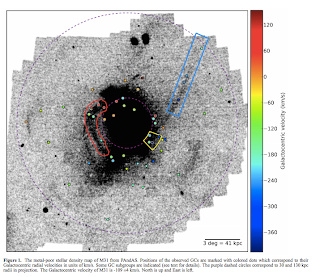 The Andromeda Galaxy is lost in the mess in the middle there. The coloured circles are the globulars observed for this project; luckily, as we are collecting the light from a million stars in one go, we can get the velocities of the globulars with small (i.e. only 4m-class) telescopes. The colour-coding is the velocities that we measured. The red, yellow and blue boxes correspond to globulars that we think are associated with underlying substructure.

People have been collecting globular cluster velocities in Andromeda for a while, especially the ones closer to the centre of Andromeda. With a few hundred velocities in the bag, we can plot the velocity verses the distance of the globular (in projection) from Andromeda. What do we get? Well, this: 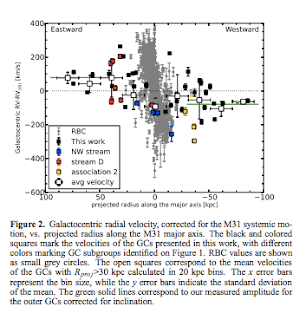 The velocities are "galacto-centric" meaning that we have taken the orbital motion of the Sun out of the equation, and have also subtracted the bult motion of Andromeda. Clearly, there is a slope, with positive velocities on the left and negative velocities  on the right. This tells us that there is a bulk rotation to the globular cluster population. How cool is that!

We can subtract off the rotation, and now get the velocity as a function of radius from Andromeda. Here's what we get: 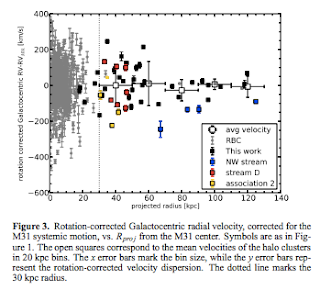 So, the previous picture showed us "rotational velocity". This one tells us the "pressure velocity". I know this phrase throws some people, but it just means that the globulars are buzzing about more like comets more than the orderly motion of the planets.

With a bit of mathemagic, we can use this signature to tell us the mass of the Andromeda Galaxy. The result is that we find Andromeda to have a mass of

We have a range as there are some assumptions that we have to make about the profile of the dark matter mass distribution, but the total uncertainty is less than 20%. Cool!

I'm going to have to wrap up here, but the mass of Andromeda and the Milky Way have been a matter of a lot of debate over the years, especially the question of which one is the more massive. This puts there masses closer together again, but Andromeda still wins (just!). But more about that another day!

We present the first kinematic analysis of the far outer halo globular cluster (GC) population in the Local Group galaxy M31. Our sample contains 53 objects with projected radii of ~20-130 kpc, of which 44 have no previous spectroscopic information. GCs with projected radii >30 kpc are found to exhibit net rotation around the minor axis of M31, in the same sense as the inner GCs, albeit with a smaller amplitude of 79 +/-19 km/s. The rotation-corrected velocity dispersion of the full halo GC sample is 106 +/-12 km/s, which we observe to decrease with increasing projected radius. We find compelling evidence for kinematic-coherence amongst GCs which project on top of halo substructure, including a clear signature of infall for GCs lying along the North-West stream. Using the tracer mass estimator, we estimate the dynamical mass of M31 within 200 kpc to be M_M31 = (1.2-1.5) +/- 0.2 x 10^12 M_sun. This value is highly dependent on the chosen model and assumptions within.