The structure of star clusters in the outer halo of M31

February 29, 2012
I am slowly recovering from the recent round of grant writing. The internal deadline for our Australian Research Council (ARC) Discovery Projects (DPs) was on Monday, and, as ever, it was late nights and early mornings to put together the 115 pages of science case, budgets, budget justifications, publication records, career histories etc etc etc. Now all I have to do is sit back until July (when the referees' reports come in) and then to November (when the results are announced). If I get my grant, I'll write and say how great the systems is. However, if I am the three in four who will not get funded, I'll have a rant.

Anyway, even though the days have been lost to grant writing, science has advanced, and we recently had a paper accepted for publication in MNRAS, using the Hubble Space Telescope to look at clusters around our nearest big galactic neighbour, Andromeda.

Many objects are globular clusters, just like the ones we orbiting our own Milky Way. With Hubble Space Telescope images, we can easily see the individual stars in the globular and work out how the stars are distributed. Here's an example - 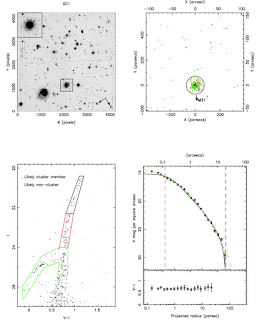 In the top left, we have our Hubble picture of the sky, and the bottom left is the colour-magnitude diagram. The problem is that we have not only our globular's stars in there, but also contamination from galactic stars. The upper right are the stars identified from the colour-magnitude diagram, and the bottom right is the surface brightness distribution.

All well and good. Except, we have these in the halo of Andromeda as well 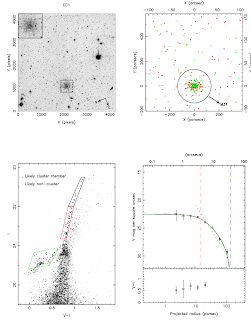 These are extended clusters (otherwise known as "faint fuzzies"). These things are weird. As you can see from the bottom right, the profile of these objects are a lot flatter, and more extended than standard globulars. Now, here's a cool plot from an earlier paper; 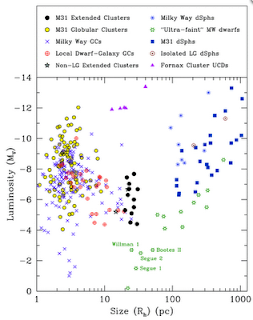 So, this shows the size of objects in the verses their brightness. This plot used to be quite simple with objects on the left, the globulars

and on the right are dwarf galaxies Basically, the ones on the left are not dominated by dark matter, and have simple star formation histories, whereas those on the right have lots of dark matter and complicated histories.

But what has happened over the recent years is that the gap in between has been filled in. In the Milky Way there are ultra-faint dwarfs, thought by some (not by all) to be dominated by dark matter. Whereas, from the left, the faint fuzzies are seen not to be dark matter dominated.

It's actually all a little confuddling. Perhaps we should expect the gap to be filled, but not necessarily by two different kinds of things. And the very bizarre thing, there does seem to be any faint fuzzies orbiting the Milky Way. Why? I don't know, but we are finding the universe to be more complex than thought. Well done Nial :)

The structure of star clusters in the outer halo of M31


We present a structural analysis of halo star clusters in M31 based on deep Hubble Space Telescope (HST) Advanced Camera for Surveys (ACS) imaging. The clusters in our sample span a range in galactocentric projected distance from 13 to 100 kpc and thus reside in rather remote environments. Ten of the clusters are classical globulars, while four are from the Huxor et al. (2005, 2008) population of extended, old clusters. For most clusters, contamination by M31 halo stars is slight, and so the profiles can be mapped reliably to large radial distances from their centres. We find that the extended clusters are well fit by analytic King (1962) profiles with ~20 parsec core radii and ~100 parsec photometric tidal radii, or by Sersic profiles of index ~1 (i.e. approximately exponential). Most of the classical globulars also have large photometric tidal radii in the range 50-100 parsec, however the King profile is a less good fit in some cases, particularly at small radii. We find 60% of the classical globular clusters exhibit cuspy cores which are reasonably well described by Sersic profiles of index ~2-6. Our analysis also reinforces the finding that luminous classical globulars, with half-light radii <10 parsec, are present out to radii of at least 100 kpc in M31, which is in contrast to the situation in the Milky Way where such clusters (other than the unusual object NGC 2419) are absent beyond 40 kpc.