Brydon and the Royal Australian Observatory

February 05, 2012
Now, I love a good comedy (and a few bad ones) as much as the next person, but it's grant writing time, and so I am going to be grumpy here. One thing that gets me hot under the collar is terrible portrayals of science, especially astronomy and astrophysics, in the media. Which brings me to exhibit number 1. The TV comedy, Supernova, starring welsh comedian, Rob Brydon. 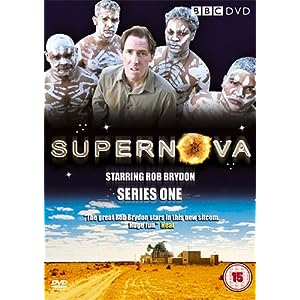 The story is simple. Brydon plays Dr Paul Hamilton, who moves to work at the fictional Royal Australian Observatory, and the laughs come thick and fast in the usual "fish out of water" situations. Well, they don't really, the series was a flop, and lacks a lot of laughs,  but, amazingly, a second season was made. 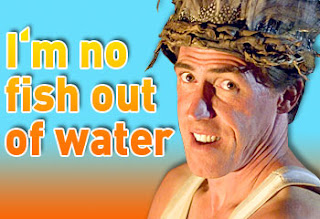 I don't know how I missed this when it was originally shown in 2005/2006, but its portrayal of astronomy and astronomers is, well, rubbish.

I would write pages and pages on this, but let's start with some basic things.

The Observatory: You can tell by the image above, the Royal Astronomical Observatory is sitting there, out in the Outback, in the middle of nowhere (well, close to Broken Hill, where Mad Max 2 was filmed). I'm sure this was to get an Australian "feel" to the show, and make the fish-out-of-water more fish-out-of-watery. Now, you might want to build a radio telescope out there (and that's what they have done at Narrabri, although not so deserty). There is a real optical observatory in Australia, at Siding Spring, not that far from Broken Hill. What does that look like? It's up a mountain, where you expect to find an optical observatory. Clearly, it's a bit too green for a fish-out-of-water welsh astronomer to be in. But it is what an Australian optical observatory looks like. And there are aboriginals living there too (but, of course, people want to see aboriginals living like wild warriors out in the desert rather than think about the real challenges facing these people).

The Telescope: This is the telescope at the Royal Australian Observatory (in the TV show). 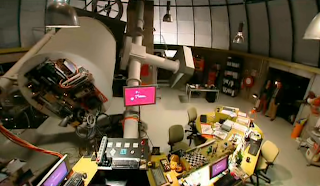 The telescope is puny and many amateurs would have better. This is the mighty Anglo-Australian Telescope

Notice the scale on this image. I remember the first time I went into the dome, I thought I was in a James Bond set. It's huge, it's impressive, it's a real telescope! The show makes another cardinal sin with regards to astronomy. Astronomers don't sit around in the dome with lights blazing, computers humming etc when they are observing. The telescope is in total darkness, away from sources of light which would cause the air to shake and blur the images. The astronomers sit in control rooms, away from the telescope, often with music thumping to keep them awake. Given the nature of the site of the Royal Australian Observatory, a crappy telescope with lights on would seem to fit.

Doing science: Now, this is the bit that really drove me crazy. The show is filled with sciencey buzzwords, and Rob Brydon's character, an expert on gas, spouts all kind of stuff. But their crappy telescope can so magic, it can see round corners and to see patches of gas at the birth of the Universe. The notion of writing a paper, the staple of research, is all very bizarre, as is giving presentations etc. I don't know what more I can say about this, it just is nothing like real science.

OK, OK  - I know it's a comedy show. I know I should not be so critical. But seeing that they were filming in Sydney, which has a high density of astronomers, perhaps they could have asked for some advice to look slightly like a real astronomer. Heck, they could have even filmed up at the AAT, and had a realistic telescope dome, one more impressive than the one they showed. It may not have helped the laughs, but it would have at least looked slightly more "scientific".

As an aside, I am a fan of Rob Brydon. In fact, he was raised in Baglan, next to Neath, the town I was born in. And as a link to science fiction, Baglan is part of Port Talbot, home to the Port Talbot Steel Works.

which was apparently the inspiration for Ridley Scott's vision of a future city in Blade Runner. I've see it at night, it's a startling sight!