Intermission: View from the 4m

September 25, 2011
After a rushed week, it was time to hop on a plane and head for the US. After passing through LA Airport (not my favorite, especially given the time taken to fingerprint me and the several hundred people who arrived with me, but the passport checking guy was friendly and chatted about astronomy - holding up the hundreds behind me :), I got into Tucson yesterday where it was 37C.

Today was the drive up to Kitt Peak, through very stark desert, with amazing cacti and people seemingly living in the middle of nowhere. Definitely cooler, the view from almost 7000 ft over the desert is very cool. Here's the view from the bottom of the 4m Mayall Telescope, overlooking the rest of Kitt Peak. 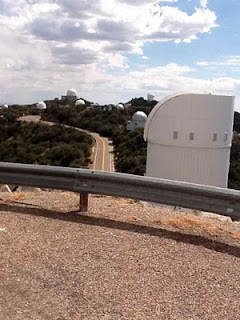 The clouds, of course, aren't exactly a good sign, and we've lost a little time this evening to them, but things look like they will be running a soon. I will write a little more about the science later in the week.

Before going back to the clearing skies, a couple of interesting things about the trip so far.

Firstly, it was very interesting switching from the Qantas AirBus 380, with its hundreds of passengers, to the much smaller American Eagle plane, with less than 40 seats, for the LA to Tucson leg.

And secondly, heading out of LA, we flew over the sea, and, as I had a window seat, I gazed at the huge city and the boats on the ocean. We were still climbing and one boat looked a bit weird, sort of long and blue, but with bits sticking out at the back. I wondered a bit more, and as it dawned on me that I was looking at, it broke the surface and there was a gush of water vapour. Now, I'm not say it was a blue whale (but it was blue), but apparently they being seen off the coast of California.
Blue whale or not, it was pretty cool.