Throwing a ball in a rotating spaceship

January 03, 2016
A long time ago, I wrote a post about the Physics of Rendezvous with Rama, a science fiction story by Arthur C. Clarke set on an immense alien spaceship. The spaceship rotates, providing the occupants with artificial gravity, a staple of science fiction. I mentioned in the article that I am not an immense fan of a lot of science fiction, as much of it relies on simple "magic", but Clarke knew his physics and so he knew that the "gravity" experienced in the rotating ship will differ to that on Earth, and previously I wrote about what happens if you jump off a cliff.

In the last week, there was a question on twitter (it's an internet thing) about the movie Elysium which has a spectacular rotating spacecraft with the Earth's rich abroad. While it's a shame that the plot was not as spectacular, the question was how can such a station keep it's atmosphere.

This is an interesting question, as you might think that it would all simply zip off into space. But the key point is that the atmosphere itself is also rotating with the ship, and so "experiences gravity". But what happens to individual molecules in the air?

Well, we can do a bit of physics (yay!) and work this out. If you have done some basic physics (or chemistry) you have have encountered the ideal gas laws, relating some of the key properties of a gas, such as the temperature, volume and pressure. The derivation of these can be deceptively simple, but the equations are very powerful. And to do these derivations, you essentially assume that atoms are very bouncy balls that bounce off the walls of the vessel.

So, what about bouncing a ball inside a rotating space station? There is a nice little discussion here on the key physics, but it is very simple (if you are an undergrad who as done your classical mechanics, you should give this a go). The important point is that seen from an external observer, a bouncing ball follows a straight-line path (remember, there are no forces acting on the ball), but the view to a person inside the ship will be different. Here's a simple example.

So, this is a bouncing ball as seen by an outside observer (taking into account the motion of the ship in the collisions). 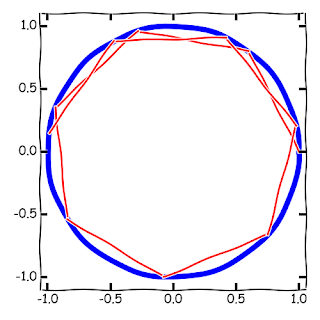 The blue is the wall of the ship (which is rotating) and the red is the path of a bouncing ball.

What about the view from inside? 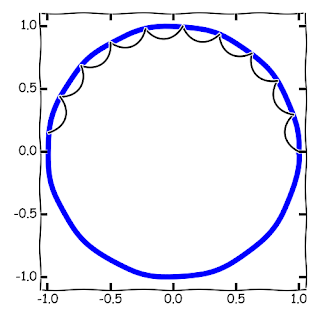 Boing, boing, boing! The ball bounces off into the distance, and, if we leave it, will bounce all the way around the station and hit you in the back of the head :)

So, an air molecule will bounce in a similar fashion around the station, and so an atmosphere will be kept there too. Yay for all the rich people!!

Slowing the ball down gives the same path to the outside observer, but why does the internal observer see? 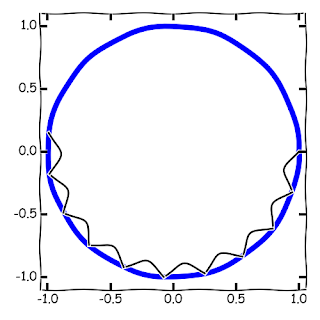 Oh... The ball bounces the other way around the ship. Cool!

What if we lob the ball into the air rather than bouncing it off the all of the shop. In fact, let's arrange for it to go straight up (again, velocity relative to the outside observer). We'll adjust the velocity so that bounce off the other side and get bak to the start position in the time it takes for a single revolution of the ship.

Again, the red is the path as seen by the outside observer, the black by the inside. 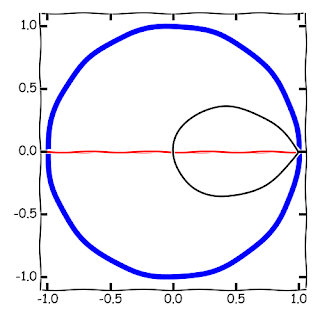 The ball arcs behind the thrower, over the top, and comes back in front of the thrower. In fact, there are several black loops present, each on top of the other.

What if we slow the ball down a little, so the observer on the ship makes two revolutions in the time it takes the ball to get over and back. 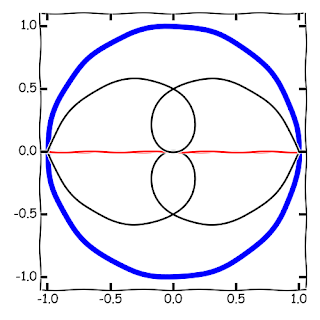 Wow!! So we see the ball bounce of the other side of the ship and do some mid-air pirouettes. Let's slow it down by a factor of two again! 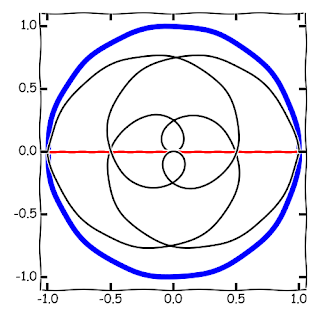 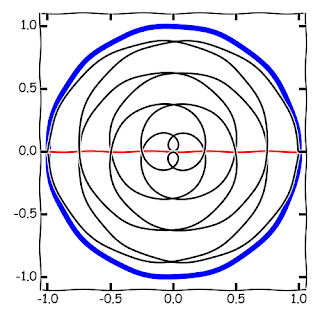 Excellent. Imagine watch this ball fly through the air!

Let's instead double the speed. What do we get? 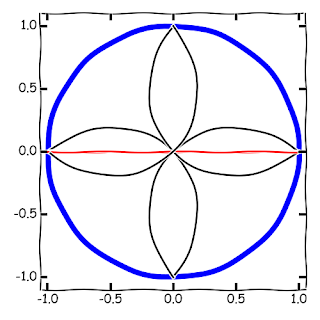 Again, think about being a being at rest watching the ball bouncing through the ship! 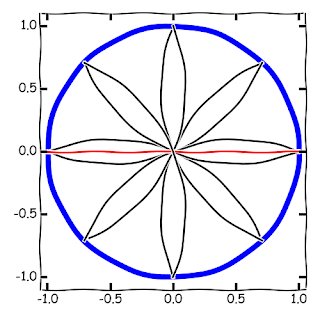 We can see where this is going!

And if we modify the velocity across the ship so there is not a "resonance" between the bouncing and the rotation, we get 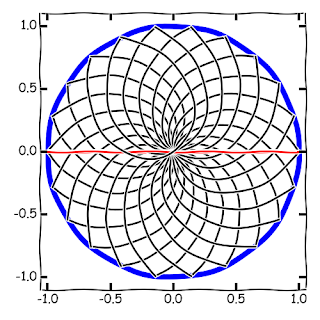 Again, the ball will perform exquisite arcs through the ship and with bounces of the wall!

How much fun is this! I've got to take a break right now, but later I will consider what happens if you want to play a ball game, like tennis, inside a rotating space ship. The rich people might get more than they are asking for!