Journey to the Far-Side of the Sun

January 25, 2016
There was a movie, in the old days, Journey to the Far-Side of the Sun (also known as Doppleganger) which (spoiler alert) posits that there is a mirror version of the Earth hidden on the other side of the Sun, sharing the orbit with our Earth. The idea is that this planet would always be hidden behind the Sun, and so we would not know it there there.

This idea comes up a lot, over and over again. In fact, it came up again last week on twitter. But there's a problem. It assumes the Earth is on a circular orbit.

I won't go into the details here, but one of the greatest insights in astronomy was the discovery of Kepler's laws of planetary motion, telling us that planets move on elliptical orbits. With this, there was the realisation that planets can't move at uniform speeds, but travel quickly when closer to the Sun, while slowing down as their orbits carry them to larger distance.

There has been a lot of work examining orbits in the Solar System, and you can simply locate the position of a planet along its orbit. So it is similarly simply to consider two planets sharing the same orbit, but starting at different locations, one at the closest approach to the Sun, one at the farthest.

Let's start with a simple circular orbit with two planets. Everything here is scaled to the Earth's orbit, and the circles in the figures coming up are not to scale. By here's an instance in the orbit. 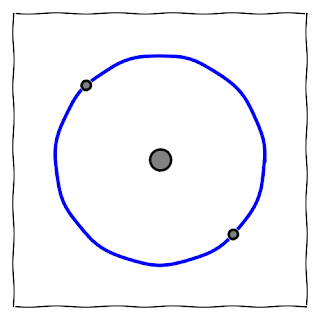 It should be obvious that at all points in the orbit, the planets remain exactly on opposite sides of the Sun, and so would not be visible to each other.

So, here's a way of conveying this. The x-axis is the point in the orbit (in Earth Years) while the y-axis is the distance a light ray between the two planets passes from the centre of the Sun (blue line). The red line is the radius of the Sun (in Astronomical Units). 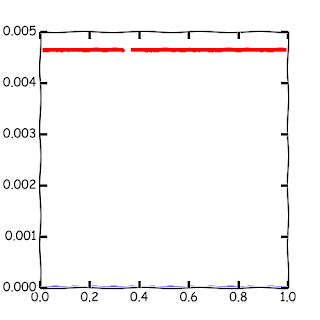 The blue line, as expected, is at zero. The planets remain hidden from each other.

Let's take a more eccentric orbit, with an eccentricity of 0.1. Here is the orbit 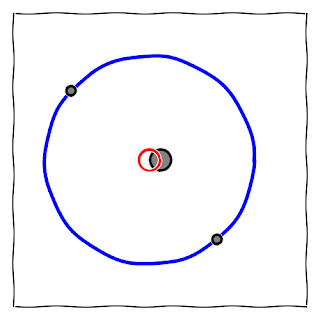 This doesn't look too different to the circular case above. The red circle in there is the location of the closest approach of each line of sight to the centre of the Sun, which is no longer a point. Let's take a look at the separation plot as before. Again, the red is the radius of the Sun. 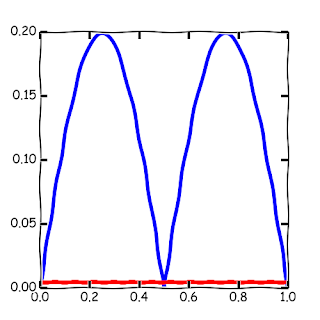 Wow! For small segments of the planets orbits, they are hidden from one another, but for most of the orbit, the light between the planets pass at large distances from the Sun. Now, it might be tricky to see each other directly due to the glare of the Sun, but opportunities such as eclipses would mean the planets should be visible to one another. 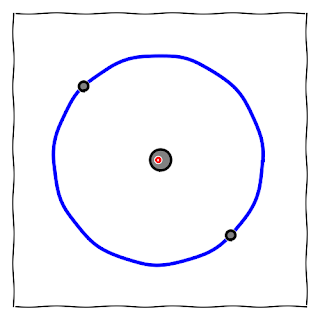 So, the separation of the paths between the planets pass closer to the centre of the Sun, but, of course, smaller than the more eccentric orbits. What about the separation plot? 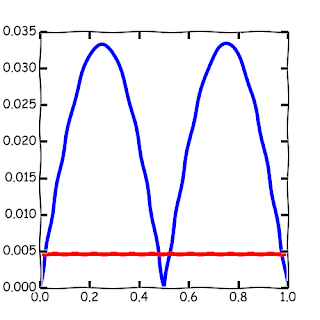 Excellent! As we saw before, for a large part of the orbits, the light paths between the planets passes outside the Sun! If the Earth did have a twin in the same orbit, it would be visible (modulo the glare of the Sun) for most of the year! We have never seen our Doppleganger planet!

Now, you might complain that maybe the other Earth is on the same elliptical orbit but flipped so we are both at closest approach at the same time, always being exactly on the other side of the Sun from one another. Maybe, but orbital mechanics are a little more complex than that, especially with a planet like Jupiter in the Solar System. It's tugs would be different on the Earth and its (evil?) twin, and so the orbits would subtly differ over time.