June 22, 2014
Well, I don't know where that month vanished, but I now find myself sitting in the very nice Swan's Hotel in Victoria, Canada, after doing some nice new work with Alan McConnachie at the Herzberg Institute of Astrophysics. The week has gone fast, and I've given two talks, and have four more to give in California next week.

But I realised that I have neglected the blog, and there has been quite a few papers of mine put on the arxiv I should talk about. I have quite a bit of catching up to do, so here's a first post, and I will try and post some more over the next couple of weeks.

A few weeks ago, I posted an article about the fact that we now have the final catalog of the globular clusters found in the PAndAS survey. This has been a major undertaking, seeing out these balls of a few million stars in the outer reaches of Andromeda. But it's been very successful, and we can now start to ask the question "what have we learnt?" This is the topic of this post, a new paper by recently- minded postdoc, Jovan Veljanoski.

Jovan went beyond what we can do with PAndAS data and used spectroscopy to measure the speeds of the globular clusters orbiting Andromeda. As globular clusters are significantly brighter than individual stars, we can use smaller telescopes, such as the William Herschel Telescope, to do this, it is still not a simple measurement.

But we can cut to the chase and see a nice graphical view of what we found: 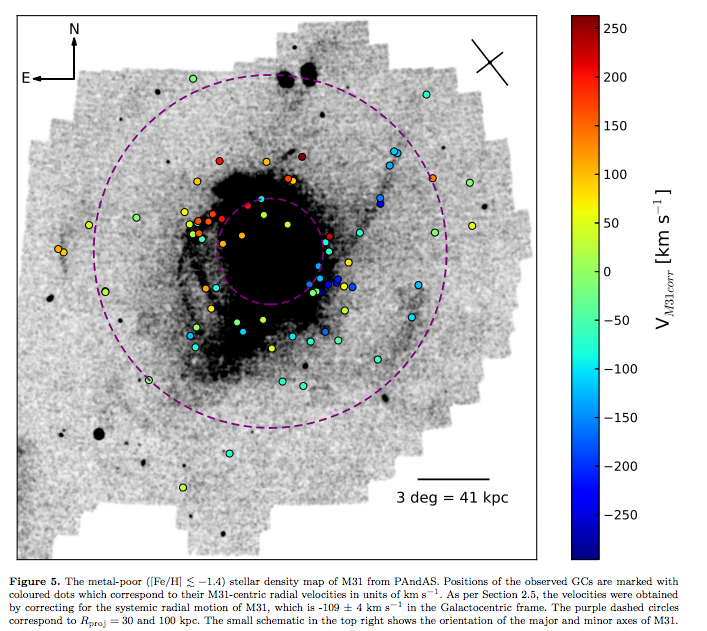 So, here the globular clusters have been colour-coded by velocity, relative to Andromeda (which is moving at 300 km/s towards us). It doesn't take much staring to reveal a couple of very interesting things.

Firstly, on the South-West Cloud (the blob on the right side, just below the middle) there are three globulars with a very similar shade of blue, meaning they are moving at about the same speed. Are these associated with the globulars directly associated with the underlying stars, suggesting that they were brought in on a system now disrupting? More on that in the near future!

On the left, on the Eastern Cloud, there are two yellowy-orangey clusters, again moving at the same speed. Are these associated with the Eastern Cloud? That's something we'll have to come back to!

But there are more groups of globulars moving at similar velocity, and here we high-light a few of them. This is cool as it's what you would expect from our models of galaxy formation and evolution, where galaxies grow over time through the accretion of smaller systems. We are really seeing galaxy evolution in action.

But there is more! It's also quite simple to see that the clusters on the left side of the picture are more orange and red, meaning they are moving away from us relative to Andromeda, whereas those on the right are blue, meaning they are coming towards us; the globular cluster population in Andromeda is rotating! Wow!

This is quite puzzling! If we are seeing a snapshot of galaxy evolution, where Andromeda has eaten lots of little dwarfs that fell in higgledy-piggledy, where does the coherent rotation come from? Well, we have a couple of options. Either what we are seeing is actually the result of one big accretion, which came in and deposited all of this material on one go, which strikes me as unlikely given the mess that we see, or the accretion wasn't random and dwarfs have been coming with a preferred direction.

Both options are head-scratchingly weird. But as we have said before, there are lots of weird motions in the halo of Andromeda, especially with the existence of the Vast Thin Plane of Dwarf Galaxies (and, I promise more on this interesting thing in the very near future), and, at least to me, all of this is pointing towards something we really don't understand. And I think that's fantastic!

We present a detailed kinematic analysis of the outer halo globular cluster (GC) system of M31. Our basis for this is a set of new spectroscopic observations for 78 clusters lying at projected distances between Rproj ~20-140 kpc from the M31 centre. These are largely drawn from the recent PAndAS globular cluster catalogue; 63 of our targets have no previous velocity data. Via a Bayesian maximum likelihood analysis we find that GCs with Rproj > 30 kpc exhibit coherent rotation around the minor optical axis of M31, in the same direction as more centrally- located GCs, but with a smaller amplitude of 86+/-17 km s-1. There is also evidence that the velocity dispersion of the outer halo GC system decreases as a function of projected distance from the M31 centre, and that this relation can be well described by a power law of index ~ -0.5. The velocity dispersion profile of the outer halo GCs is quite similar to that of the halo stars, at least out to the radius up to which there is available information on the stellar kinematics. We detect and discuss various velocity correlations amongst subgroups of GCs that lie on stellar debris streams in the M31 halo. Many of these subgroups are dynamically cold, exhibiting internal velocity dispersions consistent with zero. Simple Monte Carlo experiments imply that such configurations are unlikely to form by chance, adding weight to the notion that a significant fraction of the outer halo GCs in M31 have been accreted alongside their parent dwarf galaxies. We also estimate the M31 mass within 200 kpc via the Tracer Mass Estimator, finding (1.2 - 1.6) +/- 0.2 10^{12}M_sun. This quantity is subject to additional systematic effects due to various limitations of the data, and assumptions built in into the TME. Finally, we discuss our results in the context of formation scenarios for the M31 halo.