The Nature and Origin of Substructure in the Outskirts of M31 -- II. Detailed Star Formation Histories

June 28, 2014
I am still playing catch up on papers, and I've just woken up early here in San Francisco and have a small amount of time before I have to prepare for my talk today. So, this will be quick.

The topic again is our nearest largest companion, the Andromeda Galaxy, especially working out the history of how stars have formed in the (relatively) inner regions of the galaxy. It might seem a little strange that we can work that out, because all we can see is stars, but with the magic of science, it is possible. That's the topic of this new paper by postdoctoral researcher, Edouard Bernard.

This beautiful science is done with the Hubble Space Telescope. The first thing you need to do is decide where to look. So, here's the fields we looked at 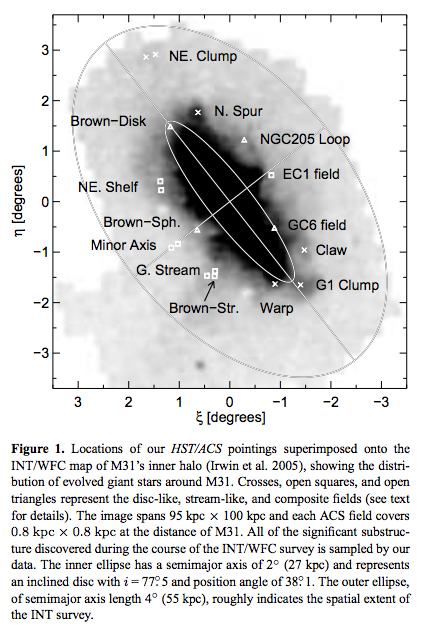 One of the sad things is that the area Hubble can image (its field of view) is tiny compared to the extent of Andromeda, and so we are doing key-hole surgery in select areas on interesting bits of Andromeda, especially prominent bits of substructure scattered about.

We image each of the fields in two colour bands, a blue(ish) one and a red(ish) one, and once you have this you can construct a colour-magnitude diagram. But how do you work out the star formation history? 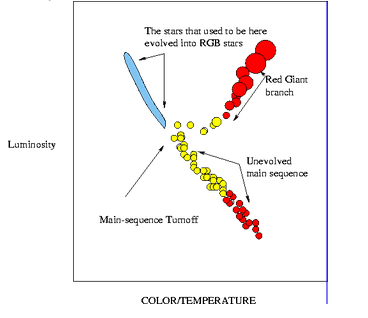 So, every burst of stars gives you a new population on the main sequence, and then after time they start to move off, and if you imagine this happening over and over again, you get a complex mess in the colour-magnitude diagram. And, with hard work, you can invert this. Here's a picture from the paper 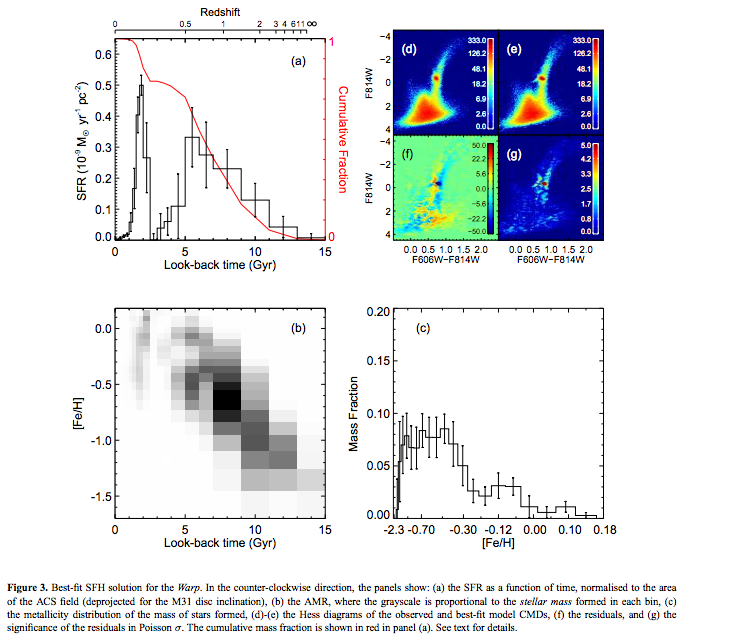 The colour magnitude diagram is in the upper right; if you are an amateur astronomer and understand the magnitude scale, check out the numbers on the side. This tells you about the power of Hubble!

The other panels give the star formation rate (SFR) in the upper left, and metallicity (chemical enhancement) in the bottom right.

So, what do we find? Fields were identified as being disk-like, being part of the main body of Andromeda, stream-like, so they look like they are associated with the giant tidal stream in Andromeda, and composite, which are, well, more complicated.

Here's the cumulative star formation history for the various fields, but it should be clear that stars in the disk-like fields (blue) formed more recently than those in the other fields. But why? 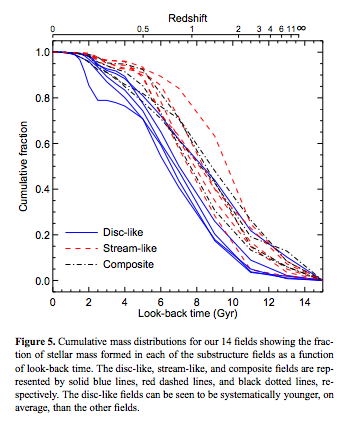 Here's the actual histories, which shows how much mass in stars is formed as a function of time. 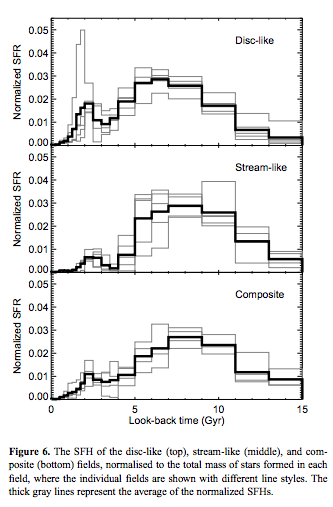 Argh! I'm running out of time, but could go on for ages, but we are scratching the surface. Essentially, but clearly we have on going star formation in the galaxy disk, making a lot recently, where as the stars in the giant stream (which was formed a while ago and then fell into Andromeda) are somewhat older.

But the star formation histories are not smooth, all with a broad peak in their earlier history, but rather curiously possessing a spike in star formation around two billion years ago. What caused this? Well, it looks like it occurred when M33 crashed the party, exciting a new burst of stars, and scattering others to large distance.

I'm out of time, but this is all cool stuff. Well done Eduoard!


The Nature and Origin of Substructure in the Outskirts of M31 -- II. Detailed Star Formation Histories

While wide-field surveys of M31 have revealed much substructure at large radii, understanding the nature and origin of this material is not straightforward from morphology alone. Using deep HST/ACS data, we have derived further constraints in the form of quantitative star formation histories (SFHs) for 14 fields which sample diverse substructures. In agreement with our previous analysis of colour-magnitude diagram morphologies, we find the resultant behaviours can be broadly separated into two categories. The SFHs of 'disc-like' fields indicate that most of their mass has formed since z~1, with one quarter of the mass formed in the last 5 Gyr. We find 'stream-like' fields to be on average 1.5 Gyr older, with <10 percent of their stellar mass formed within the last 5 Gyr. These fields are also characterised by an age--metallicity relation showing rapid chemical enrichment to solar metallicity by z=1, suggestive of an early-type progenitor. We confirm a significant burst of star formation 2 Gyr ago, discovered in our previous work, in all the fields studied here. The presence of these young stars in our most remote fields suggests that they have not formed in situ but have been kicked-out from through disc heating in the recent past.