Misconceptions About the Universe

May 29, 2014
Over on youtube, Veritasium has a nice discussion of Misconceptions about the Universe. I  like it, especially as I was the consultant cosmologist :)

A little look down the comments tho, and we see several claims that what Derek says is not correct. Here's a little excerpt 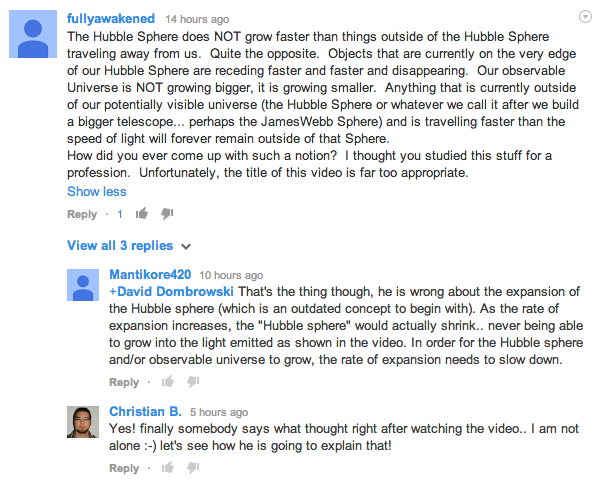 Well, as a cosmologist, I was surprised to read that the Hubble Sphere is an "outdated concept" having seen it used in a professional meeting last week. But let's take a look at the other claims that are made by "fullyawakened" - I must admit they have the lead on me as I am partiallyjetlagged at the moment. As ever, I am going to steal Tamara Davis's standard cosmological picture in a few different sets of coordinates to do this. I've explained these before, but the top one has distance as we know it along the x-axis, and time as we experience it up the y-axis. 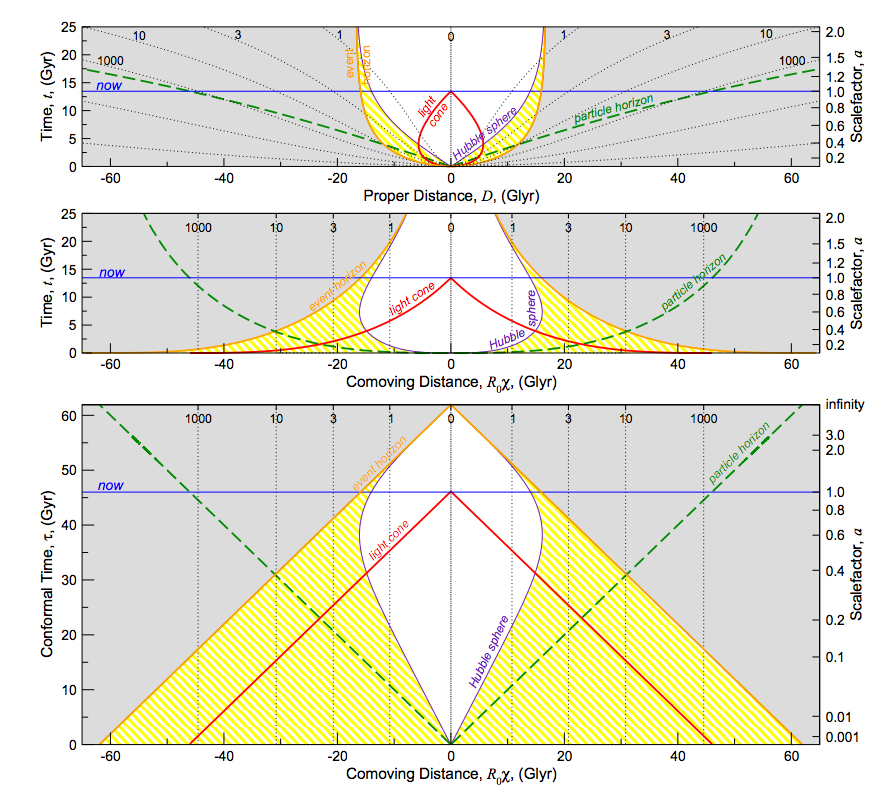 "Our observable Universe is getting smaller" is simply wrong. Let's look at the bottom figure, which is in conformal coordinates - basically the expansion has been taken out of the space direction, and the time has been modified so light rays travel at 45 degrees. Objects in the Universe, such as other galaxies, are vertical dotted lines. We are at "now" in the middle. The red lines are our past light cone, and so where the vertical dashed lines cross the red lines, those represent objects that we can see right now.

It doesn't take a lot of thought to see that as "now" moves up the page, the red lines will move up also move upwards, and so the points where they intercept the x-axis will move outwards. As time goes on we will see more and more universe. The cosmic microwave background we see today will be seen to cool and form galaxies into the future, while a more distant cosmic microwave background will take its place. For the eternity of the Universe, the observable Universe will continue to grow, albeit at a slower and slower rate.

As Derek pointed out, there is plenty of stuff outside the Hubble sphere (the yellow shaded area) which we can see; remember, this stuff is moving faster than light with respect to us. And we can see it.

Things get more interesting as you look at this in the bottom panel, as if we remove the expansion and look in comoving coordinates, the Hubble sphere starts of growing and then shrinks into the future. But you should understand comoving coordinates before taking too much away from that. 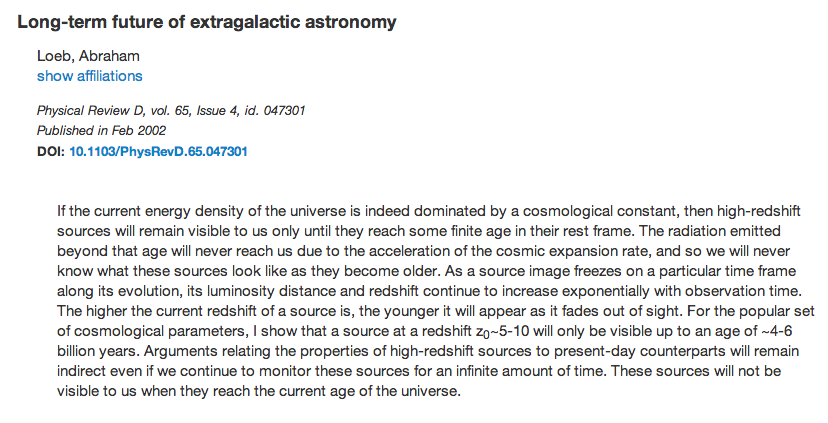 So, where do they go. I've written about the mapping between experienced time and conformal time in the Future, and one of the nice things about our Universe is that the infinite experienced time becomes a finite conformal time. It means there is one last light cone (the event horizon in the picture). When the dotted line of a galaxy crosses this, this must be the last view that we get of it. But what it means is that in the dim and distant future, the distant galaxies we see will appear to slow down, their rotation will look like it's stopping, exploding stars will take weeks, months, centuries to occur, and as they do, the light from the galaxies will become more and more redshifted, until finally they completely fade from view.

So, fulltawakened, yes, I do do this for a living, and I know what I'm talking about. Ain't the Universe fantastic!
Cosmology Physics
Location: Sydney NSW, Australia