The large-scale structure of the halo of the Andromeda Galaxy Part I: global stellar density, morphology and metallicity properties

December 07, 2013
And now for a major paper from the Pan-Andromeda Archaeological Survey (PAndAS), led by astronomer-extraordinare Rodrigo Ibata. I've written a lot about PAndAS over the years (or maybe a year and a bit I've been blogging here) and we've discovered an awful lot, but one of the key things we wanted to do is measure the size and shape of the stellar halo of the Andromeda Galaxy.

The stellar halo is an interesting place. It's basically made up of the first generation of stars that formed in the dark matter halo in which the spiral galaxy of Andromeda was born, and the properties of the halo are a measure of the  formation history of the galaxy, something we can directly compare to our theoretical models.

But there is always a spanner in the works, and in this case it is the fact that Andromeda, like the Milky Way, is a cannibal and has been eating smaller galaxies. These little galaxies get ripped apart by the gravitational pull of Andromeda, and their stars litter the halo in streams and clumps. As we've seen before, Andromeda has a lot of this debris scattered all over the place.

So, we are left with a problem, namely how do we see the stellar halo, which is quite diffuse and faint, underneath the prominent substructure? This is where this paper comes in.

Well, the first thing is to collect the data, and that's where PAndAS comes in. The below picture confirms just how big the PAndAS survey is, and just how long it took us to get data. 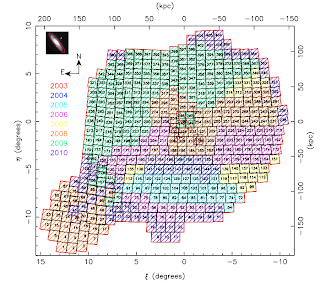 It always amazes me how small the spiral disk of Andromeda is compared to the area we surveyed, but that's what we need to see the stellar halo which should be a couple of hundred kiloparsecs in extent.

Taking the data is only the first step. The next step, the calibration of the data, was, well, painful. I won't go into the detail here, but if you are going to look for faint things, you really need to understand your data at the limit, to understand what's a star, what's a galaxy, what's just noise. There are lots of things you need to consider to make sure the data is nice, uniform and calibrated. But that's what we did :)

Once you've done that, we can ask where the stars are. And here they are; 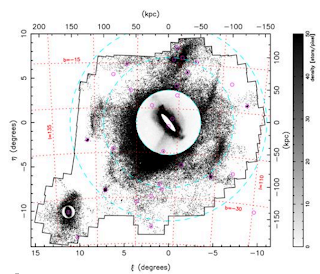 As you can see, chunks and bumps everywhere, all the dinner leftovers of the cannibal Andromeda. And all of that stuff is in the way of finding the halo!

What do we do? We have to mask out the substructure and search for the underlaying halo. We are in luck, however, as we don't have one map of substructure, we have a few of them. Why? Well, I've written about this before, but the stars in the substructure come from different sized objects, and so them chemical history will be different; in little systems, the heavy elements produced in supernova explosions are not held by their gravitational pull, and so they can be relatively "metal poor", but in larger systems the gas can't escape and gets mixed into the next generation of stars, making them more
"metal-rich".

So, here's our masks as a function of the iron abundance compared to hydrogen. 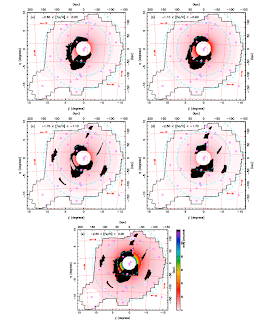 We see that the giant stream is more metal rich, but as we go to metal poor we see the more extensive substructure, including the South West Cloud.

What do we find? Well, we see the halo (horrah!) and it does what it should - it is brightest near the main body of Andromeda, but gets fainter and fainter towards the edge. Here's a picture of the profile: 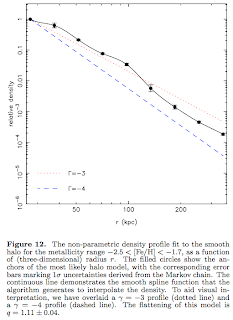 It's hard to explain just how faint the halo is, but it is big, basically stretching out to the edge of our PAndAS data, and then beyond, and looks like it accounts for roughly 10% of the stellar mass in Andromeda. It is not inconsequential!

But as we started out noting, its properties provide important clues to the very process of galaxy formation. And it appears that it looks like we would expect from our models of structure formation, with large galaxies being built over time through the accretion of smaller systems.

We're working on a few new tests of the halo, and should hopefully have some more results soon. But for now,  well done Rod!

The large-scale structure of the halo of the Andromeda Galaxy Part I: global stellar density, morphology and metallicity properties

We present an analysis of the large-scale structure of the halo of the Andromeda galaxy, based on the Pan-Andromeda Archeological Survey (PAndAS), currently the most complete map of resolved stellar populations in any galactic halo. Despite copious substructure, the global halo populations follow closely power law profiles that become steeper with increasing metallicity. We divide the sample into stream-like populations and a smooth halo component. Fitting a three-dimensional halo model reveals that the most metal-poor populations ([Fe/H]<-1.7) are distributed approximately spherically (slightly prolate with ellipticity c/a=1.09+/-0.03), with only a relatively small fraction (42%) residing in discernible stream-like structures. The sphericity of the ancient smooth component strongly hints that the dark matter halo is also approximately spherical. More metal-rich populations contain higher fractions of stars in streams (86% for [Fe/H]>-0.6). The space density of the smooth metal-poor component has a global power-law slope of -3.08+/-0.07, and a non-parametric fit shows that the slope remains nearly constant from 30kpc to 300kpc. The total stellar mass in the halo at distances beyond 2 degrees is 1.1x10^10 Solar masses, while that of the smooth component is 3x10^9 Solar masses. Extrapolating into the inner galaxy, the total stellar mass of the smooth halo is plausibly 8x10^9 Solar masses. We detect a substantial metallicity gradient, which declines from [Fe/H]=-0.7 at R=30kpc to [Fe/H]=-1.5 at R=150kpc for the full sample, with the smooth halo being 0.2dex more metal poor than the full sample at each radius. While qualitatively in-line with expectations from cosmological simulations, these observations are of great importance as they provide a prototype template that such simulations must now be able to reproduce in quantitative detail.