The Red Lady of Paviland

October 07, 2013
Apologies for the continued delays, but travels have come to an end, I find myself in a warm and sunny Sydney, and normal services will be resumed as soon as possible.

A brief non-astronomy post. One of my other interests is history, especially prehistory, and on my break, myself and the family walks from Port Eynon to Rhossilli on the Gower Peninsula in Wales. This is very near where I grew up, but I never really explored it.

It is a spectacularly beautiful piece of coast line, even in the sea fog.

One of the reasons I wanted to visit was not only the beauty, but the history.

A while ago, I bought a fantastic book called Homo Britannicus, detailing the prehistory of the British Isles.

In this book, I learnt about an amazing discovery on this very shore line, a cave containing the remains of the Red Lady of Paviland. This "lady" is red as the bones have been died with red ochre. I'll let wikipedia tell the whole story, but when discovered in 1823, it was supposed that the bones were that of a roman-era prostitute or which.

However, the bones are actually that of a man and are about 33,0000 years old. What makes the "Red Lady" special is that he was the first human fossil discovered and the oldest ceremonial burial in western Europe.

But what was he doing in a cave on a cliff just above the ocean? Fisherman? Now this is where it gets very cool. When he lived, sea-levels were considerably lower and the Severn Estuary between England and Wales was a broad river valley. Here's the map from wikipedia

The dark blue line represents the coastline during the Upper Paleolithic, and there was a lot of dry land around what is modern Britain. Standing there on the coastline, looking out on the ocean, it was very hard to imagine that thousands of years ago, mammoth, rhino and cave lions.

And the same is true about the North Sea. It is amazing to hear that bones are regularly dredged up from the bottom of the ocean.

Unfortunately, I did not go down to the cave as I thought it was off limits, but it isn't. You can scramble down the cliff and check it out, but this is not advertised as, as told to me my one of the life guards at Rhosilli, every "idiot" would be going down there and many will require rescuing when the sea comes in. Next time :)

We did a few other cool walks, including climbing Mount Snowdon. It was a slog, but we lucked out with the weather and could see the Wicklow Mountains in Ireland. And Snowdon lived up to it's name as one of the busiest mountains around, with many hundred of others taking advantage of the weather for one last climb. 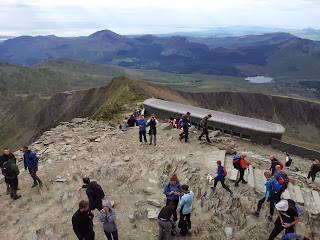