The masses of Local Group dwarf spheroidal galaxies: Not too small after all?

October 13, 2013
After a week of battling jet-lag, it's time to get back to some science. And this week, a new paper from the PAndAS, from Heidelberg based researcher,  Michelle Collins.

The target here is dwarf galaxies. Here's one from wikipedia.

Don't believe me? Well, my colleague, Alan McConnachie, recently compiled the most comprehensive compilation of the galaxies within our Local Group; you can read the details here. So, we have three large galaxies, the Milky Way, Andromeda and Triangulum, and then almost 100 smaller galaxies, a sea of dwarf galaxies.

Now, you might think that dwarfs are simple things, just a billion or so stars living together in a dark matter halo, just a smaller version of large galaxies, but no. There are a number of problems with them, such as the missing satellite problem.

In this paper, the focus is another problem with dwarfs, namely the mass of the dark matter halo in which they reside. There have been claims that even though dwarfs can have quite differing number of stars, they all seem to sit within dark matter halos of the same mass. This is a little bizarre as we would expect that in any proto-galaxy the relative amount of dark matter and gas would be the same, and so we would expect that the mass of the stars that form should be proportional to the dark matter halo in which they reside. Why don't we see that?

One thing to remember is that while it is easy to count stars in a dwarf galaxy, it is hard to measure the total amount of dark matter. The only way we can do this is to look at how the stars are moving, and see how the dark matter is influencing their orbits. Unfortunately, the Doppler effect can only reveal velocities, whereas we really need accelerations to measure the force due to dark matter. So, how to you measure the mass? I could write a book on this, but it is not easy and normally involves using things like the Jeans equations, which are fun if you enjoy mathematics, and are a nightmare if you don't.

So, what did Michelle do in this new paper? Well, for the first time, we have kinematic measurements of most of the dwarf galaxies orbiting Andromeda. I've spoken about these kind of observations before, and their not easy. The stars are are faint (well, intrinsically, they are red giant stars and are quite bright, but they are far away) and you need to use a big telescope to observe them. And we used one of the best, the mighty Keck telescope.

So, here's a plot of the half-light radius (i.e. the size) verses the velocity dispersion (which is really just the spread of speeds of the stars). 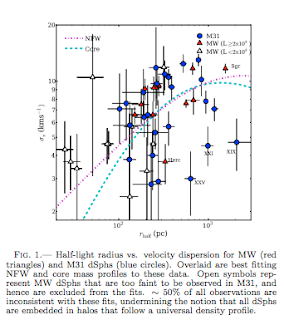 The red are the dwarf galaxies orbiting the Milky Way, and the blue are those orbiting Andromeda. Notice that while a lot of them it in the same parts of the figure, meaning they have similar properties, but there are a few brighter dwarfs in Andromeda which low velocity dispersions, which seems to indicate they are less massive.

Without getting into the gory detail (as it does get quite gory unless you like a bit of model fitting), we then tried to work out what the mass profile the dwarfs have, that is, what is the mass of the stars and the dark matter enveloping it. Here's a picture of the parameter distributions - 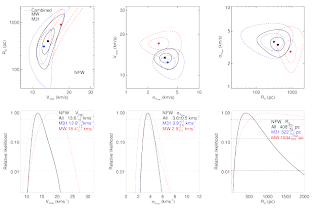 But what do these tell us?

Well, when we work out the masses of the dwarfs and pop them on a picture, you get 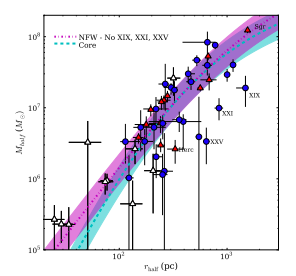 Firstly a few of the dwarfs around Andromeda have to be thrown out as their internal velocities appear to have been shaken up, probably by tidal interactions with the larger galaxy. But once that has been done, then the dwarf populations in the Milky Way and Andromeda roughly agree (there is some difference, but it is small). This is nice, as it shows that we seem to understand some of the basic properties of the dwarf population and we can compare these to our numerical simulations of galaxy formation.

There is still a problem, known as "Too big to fail", which relates to the relation between the amount of dark matter and the amount of stars that we see, and what this is telling us is something that we know, basically that gas physics is hard to do in numerical simulations, and just how gas turns into the stars we see today is quite complicated, with lots of feedback and (heaven forbid - magnetic fields).

The masses of Local Group dwarf spheroidal galaxies: Not too small after all?

We investigate the claim that all dwarf spheroidal galaxies (dSphs) reside within halos that share a common, universal mass profile as has been derived for dSphs of the Galaxy. By folding in kinematic information for 25 Andromeda dSphs, more than doubling the previous sample size, we find that a singular mass profile can not be found to fit all the observations well. Further, the best-fit dark matter density profile measured for solely the Milky Way dSphs is marginally discrepant (at just beyond the 1 sigma level) with that of the Andromeda dSphs, where a profile with lower maximum circular velocity, and hence mass, is preferred. The agreement is significantly better when three extreme Andromeda outliers, And XIX, XXI and XXV, all of which have large half-light radii (>600pc) and low velocity dispersions (sigma_v < 5km/s) are omitted from the sample. We argue that the unusual properties of these outliers are likely caused by tidal interactions with the host galaxy. We also discuss the masses of all Local Group dSphs in the context of the 'too big to fail problem', and conclude that these are potentially reconcilable with theoretical predictions when the full scope of baryonic physics and observational uncertainties are taken into account.