September 01, 2013
Why do all my posts start with an apology for how busy I have been? Ah, the life of the academic. Anyway, time is busy, as I am teaching our advanced class electromagnetism, and next week we have the dinner for the announcements of the Eureka awards. So, a relatively quick post today presenting a new PAndAS paper.

The paper, written by Jovan Veljanoski of Edinburgh's Institute for Astronomy, focuses on two smaller members of the Local Group, namely NGC 147 and its close companion, NGC 185. These two galaxies look like they are a binary pair and are in orbit around Andromeda.

NGC 185 and 147 can be seen at the top of the picture (they are actually in the constellation of Cassiopeia). Clearly 147 (on the right) has tidal debris coming off it, due to its interaction with 185, or even due to a larger interaction with Andromeda itself.

This new paper presents the discovery of four new globular clusters, three of them in NGC 147 and the other one with NGC 185. These are not the first globular clusters to be found in these two systems, but are the most remote (something we could achieve with PAndAS due to the large area of sky we imaged).

Where do the globulars lie? Here's a nice little picture

As you can see, the previously known globulars are within the main galaxies, which makes sense as previous studies will have focused upon where the light lies, rather than in the surroundings.

But how do we know that these new globulars are orbiting the smaller galaxies, rather than the larger Andromeda galaxy? By measuring their velocities! With spectroscopy, we can measure the speeds of the globulars and we already know what the velocities of 147 and 185 are. Given the small velocity differences between the globulars and the galaxies, the appears to be associated.

To try and understand what's going on, we added to the PAndAS data (which is an optical survey) by getting infrared images with the United Kingdom Infrared Telescope (UKIRT). Here's images of globular cluster population.

What can these kind of images tell us? I don't want to get into the hairy details, but the colours of globulars are not constant with time. As they age, their colours change and so we can look at the entire population and see when it was born. Here's an example of the kind of thing you can do. 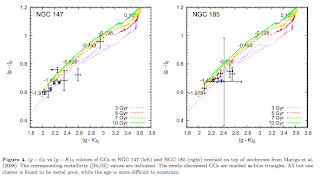 Basically, this is a "colour-colour" plot, where we take the the brightness of the clusters in each of our optical and infrared images. They just don't sit about higgledy-piggledy, but in well defined sequences. Over plotted are theoretical models of stellar populations, based upon age and metallicity (or chemical make up) and we can used the positions of the globulars to tell us that the clusters are "metal-poor" (not very chemically enriched). The ages are trickier to constrain, but globulars are generally old.

Cool stuff! and we're finding that the galaxies like 185 and 147 have pretty uniform properties, no matter where we find them in the Universe. The question we now have is "why?"

It will be fun finding out :) Well done Jovan!

Using data from the Pan-Andromeda Archaeological Survey (PAndAS), we have discovered four new globular clusters (GCs) associated with the M31 dwarf elliptical (dE) satellites NGC 147 and NGC 185. Three of these are associated with NGC 147 and one with NGC 185. All lie beyond the main optical boundaries of the galaxies and are the most remote clusters yet known in these systems. Radial velocities derived from low resolution spectra are used to argue that the GCs are bound to the dwarfs and are not part of the M31 halo population. Combining PAndAS with UKIRT/WFCAM data, we present the first homogeneous optical and near-IR photometry for the entire GC systems of these dEs. Colour-colour plots and published colour-metallicity relations are employed to constrain GC ages and metallicities. It is demonstrated that the clusters are in general metal poor ([Fe/H] < -1.25 dex), while the ages are more difficult to constrain. The mean (V-I)$_0$ colours of the two GC systems are very similar to those of the GC systems of dEs in the Virgo and Fornax clusters, as well as the extended halo GC population in M31. The new clusters bring the GC specific frequency (S_N) to ~9 in NGC 147 and ~5 in NGC 185, consistent with values found for dEs of similar luminosity residing in a range of environments.