Many people are surprised when they see the working environment of professional astronomers. Often, they are often non-descript buildings on a university campus, looking like an office block or tower. Inside are long corridors (often dark) and the sign that it is not actually a centre for selling insurance is the lax clothing and posters on the wall.

However, some observatories have a bit of style, and I've been working at two of my favourites in the UK.

The first is the Institute of Astronomy at the University of Cambridge. It is my old stomping ground and I really like it. So, here's some pictures, firstly, of the old observatory building. 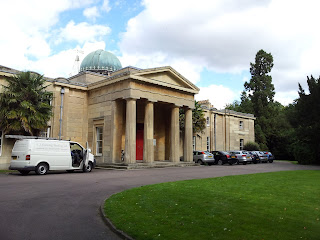 This is where Arthur Eddington (and other directors) used to live, and over on the far right-hand side is the lawn were croquet is played and where this famous photo was taken when a certain scientist came to stay.

I had an office in this building when a student.

This building is accompanied by several other buildings. The first is the Wolfson Building (universally known as the Hoyle Building after the founder of the Theoretical Astrophysics group, Fred Hoyle) which was the main block when I arrived. This has now expanded to have the Caulfield Wing, the Kavli Institute for Theoretical Cosmology, and another new building was opened this year, the Battcock Centre for Experimental Astrophysics. Here's just a few photos taken during the stroll to work. 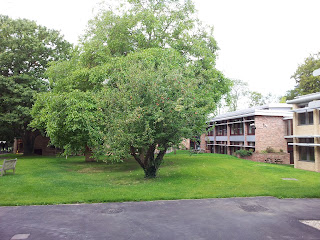 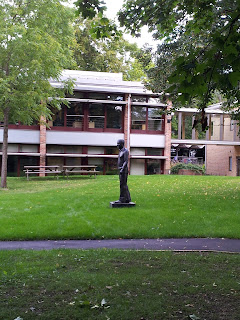 The final picture is of the statue of Fred Hoyle, which now stands in the centre of the ring of buildings. I am pleased to say I was there at the unveiling (as was Hoyle) but then the statue was at the edge of bushes and trees.

For the last few days, I have been north of the border, at the Institute for Astronomy in the wonderful (although slightly chilly) city of Edinburgh. The Institute sits within the Royal Observatory, on top of Blackford Hill and overlooks the city.

Here's a view from the hill looking back at the observatory. 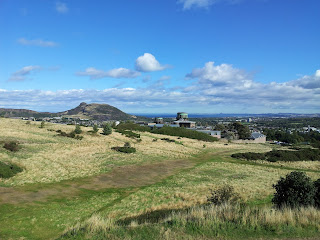 Those of you that know the city will recognise Arthur's Seat, a striking landmark. But in the foreground you can see the observatory and one of things that make it cool, namely the telescope domes. Here's they are in close up 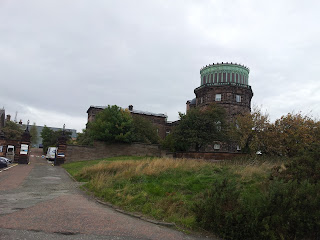 Of course, they are not quite domes, more cylinders, but they are cool.

OK - time for me to head to the airport (where they have a Spitfire as a gate guardian). More science shortly.
Intermission
Location: Blackford Hill, Edinburgh, City of Edinburgh EH9, UK