June 19, 2013
I've just fallen off a plane from the UK, and am a little tired, but here's some interesting mathematics that kept me busy `on the road'.

I've loved the Monty Hall problem since I first heard about it. It is not a difficult problem, but the outcome can seem quite counter intuitive. Before I look at the problem in more detail (more detail than I should?) you should have a look at this little video as a refresher.

So, let's try and represent all we've seen in the movie in this as a picture. 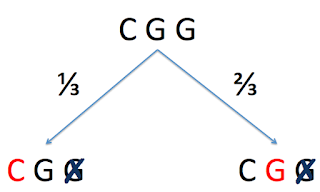 However, if you swap doors, the probability of getting a goat is now 1/3 and winning the car is 2/3; the chances of winning a car has increased by a factor of two by simply switching doors.

How cool is that!

But I started thinking, if we change the problem, change the number of doors, cars and goats, but always reveal one door with a goat, will it always boost your chances to swap? 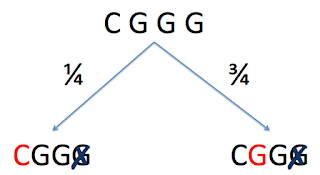 So, looking at this, then of you stick with the original choice, the chance of winning the car is 1/4 and winning a goat is 3/4. But what if you choose to swap?

Clearly, if you chose the car to start with, then when you swap you will get a goat.

OK, let's spice things up a little. Let's now have two cars and two goats. Same picture as before, but now the initial chance of choosing a car or a goat is 1/2. 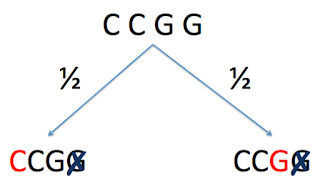 So, if you stick with your original choices, you have a 50-50 chance of winning a car. But what if you swap?

If you originally picked a car, then there is a 50-50 chance that you will swap to a car or a goat, so you can win or lose. If you originally chose a goat, then when swapping you have a 100% chance of getting a car.

So, what's the chance of winning when swapping now?

So, again, the chances of you winning are boosted by a factor of 1.5 times by swapping rather than keeping your original choice.

So, what if you have originally n cars and m goats, hidden behind (n+m) doors. What's the ratio winning when swapping compared to keeping your original choice? I will leave the algebra to the reader, but you can show this ratio is

Woooooh! This result does not depend upon the actual number of cars and goats, only the number of doors (I should point out, there has to be at least one car and two goats for this to work).

Let's just check this works. In the original problem, there are three doors, so ndoor=3, and this ratio is 2. Excellent. What about four doors, with ndoor=4? The ratio becomes 1.5, just as we saw before.

I don't know if this has been derived before, but I think it is a cool result.

It tells you a few things. Firstly, as we increase the number of doors, the ratio between swapping and sticking approaches unity, irrespective of the number of cars and goats. But more importantly, the limit is approached from above; the numerator of the fraction is always bigger than the denominator, and so the ratio is always greater than one. It might be only a little bit bigger than one, but it always is.

The moral of the story is to always swap, no matter how many doors are presented to you. Good luck!