June 09, 2013
I'm traveling (hence the lack of recent posts) and am in Blighty for two weeks. I'm a distinguished visitor at the Jeremiah Horrocks Institute at the University of Central Lancashire in the much prettier than I expected city of Preston. I'll write more about that in a little while (it's been a busy trip, with a few talks etc, and more to come).

However, I find myself in South Wales for the weekend visiting family, sitting at the bottom of the Brecon Beacons National Park in the little village of Coelbren. It's gloriously sunny at the moment, but in winter, this is a reasonably harsh place to be.

Anyway, I went for a run this morning and took this photo. 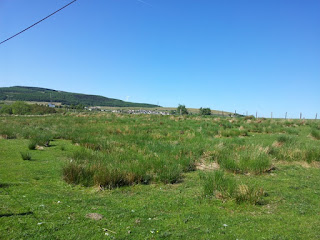 In many ways, it looks relatively unremarkable, but this view almost 2000 years ago would be very interesting. Why? Here's the view from googlemaps, with my location marked with the circles. 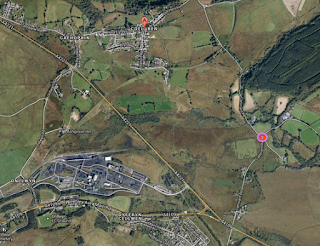 I was looking towards the bottom centre of the map, but notice how square the field is next to the circle is; it's edge is the fence in the right-hand side of the image. Shapes like that are suspicious, clearly being man-made, but by who?

A look at the Ordnance Survey map, it's clear; 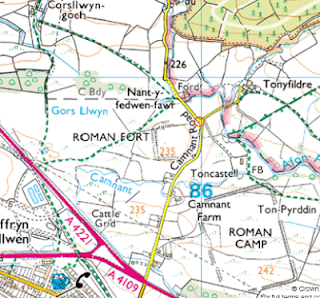 The square is a roman fort and there was a larger camp just across the road. As well as a permanent form, this region is a marching camp, with a place for troops marching from the roman settlement in Neath (where I was born, but not in roman times) to Brecon. The roman road they marched along still exists (and is called the Roman Road) and when you look at the original photo, the soldiers marched down off the hill top, through the village and over to the fort; the romans marched on the hill tops, rather than in the wooded valleys, as it aided their fighting tactics.

And the village, that's Banwen, which happens to be where my mother was born, and it is known that it  was a village in Roman times. In fact, it is often touted that as a birth place of Saint Patrick and the locals have put up a sign to promote this;

I know that people think of the Roman soldiers standing on Hadrian's Wall facing the Picts (yes, the picts, not the Scots who only arrived from Ireland in the 5th century), but here, South Wales, is a long way from Rome and must have felt like the end of the world, especially in winter.

I must admit, growing up here, I didn't really notice the local history, but standing there this morning, thinking about roman soldiers wandering about, collecting water at the local stream, and fighting the locals hiding in the woods, really brought it home. Now I think it's pretty cool. 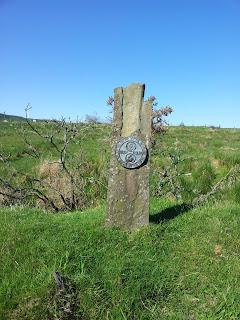